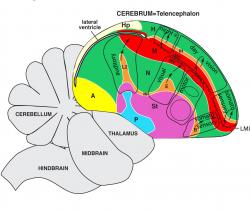 A revised map of the bird brain shows cortical areas organized in columns, as in mammals and humans. Credited to Erich Jarvis, Duke University.
Home
Featured

Explorers need good maps, which they often end up drawing themselves.

Pursuing their interests in using the brains of birds as a model for the human brain, an international team of researchers led by Duke neuroscientist Erich Jarvis and his collaborators Chun-Chun Chen and Kazuhiro Wada have just completed a mapping of the bird brain based on a 10-year exploration of the tiny cerebrums of eight species of birds.

In a special issue appearing online in the Journal of Comparative Neurology, two papers from the Jarvis group propose a dramatic redrawing of some boundaries and functional areas based on a computational analysis of the activity of 52 genes across 23 areas of the bird brain.

Jarvis, who is a professor of neurobiology at Duke, member of the Duke Institute for Brain Sciences, and a Howard Hughes Medical Institute investigator, said the most important takeaway from the new map is that the brains of all vertebrates, a group that includes birds as well as humans, have some important similarities that can be useful to research.

Most significantly, the new map argues for and supports the existence of columnar organization in the bird brain. “Columnar organization is a rule, rather than an exception found only in mammals,” Jarvis said. “One way I visualize this view is that the avian brain is one big, giant gyrus folding around a ventricle space, functioning like what you’d find in the mammalian brain,” he said.

To create different patterns of gene expression for the analysis, the birds were exposed to various environmental factors such as darkness or light, silence or bird song, hopping on a treadmill, and in the case of migratory warblers, a magnetic field that stimulated their navigational circuits.

The new map follows up on a 2004 model, proposed by an Avian Brain Nomenclature Consortium, also lead by Jarvis and colleagues, which officially changed a century-old view on the prevailing model that the avian brain contained mostly primitive regions. They argued instead that the avian brain has a cortical-like area and other forebrain regions similar to mammals, but organized differently.

“The change in terminology is small this time, but the change in concept is big,” Jarvis said. For this special issue, the of Journal of Comparative Neurology commissioned a commentary by Juan Montiel and Zoltan Molnar, experts in brain evolution, to summarize the large amount of data presented in the studies by the Jarvis group.

One of the major findings is that two populations of cells on either side of a void called the ventricle are actually the same cell types with similar patterns of gene expression. Earlier investigators had thought of the ventricle as a physical barrier separating cell types, but in development studies led by Jarvis’ post doctoral fellow Chun-chun Chen, the Duke researchers showed how dividing cells spread in a sheet and flow around the ventricle as they multiply.

Part of this refinement is simply that the tools are getting better, says Harvey Karten, a professor of neurosciences at the University of California-San Diego who proposed a dramatic re-thinking of bird cortical organization in the late 1960s. The best tools in that era were microscopes, specific cell stains and electrophysiology. Karten and colleagues are authors of a fourth paper in the special issue which announces a database of gene expression profiles of the avian brain containing some of the data that the Jarvis group used.

Jarvis said having a more specific map is necessary for properly sampling cell populations for gene expression analysis to do even more functional analysis of how the brain operates. As a next step, his team is considering doing an even more detailed bird map with “several hundred” genes rather than the 52 used to make this map.

Jarvis and colleagues are working now on a similar mapping of the crocodile brain with the ultimate goal of being able to say something about how dinosaur brains were organized, since both birds and crocs are descended from them. At a Society for Neuroscience conference in November, they’ll be presenting some early findings from that project.

Though the specifics of this newest map may only be of interest within the bird research community, Jarvis said, it builds the awareness that birds can be a useful model for many questions about the human brain.

“Where does the mammalian brain come from?” Karten asks. “And what’s the origin of these structures at the cellular and molecular level?” Some neuroscientists have argued that the mammalian cortex — the one we have — is something apart from the brains of other vertebrates. Jarvis and Karten now think vertebrate brains have more commonalities than differences.

That awareness is making birds an ever more useful model for questions about the human brain. “There are very few animal models where you can learn — at the molecular level — what’s going on in vocal learning,” Karten said. Birds are also being used as models for research on Parkinson’s, Huntington’s, deafness and other degenerative conditions in humans.

Notes about this neuroscience and brain mapping research