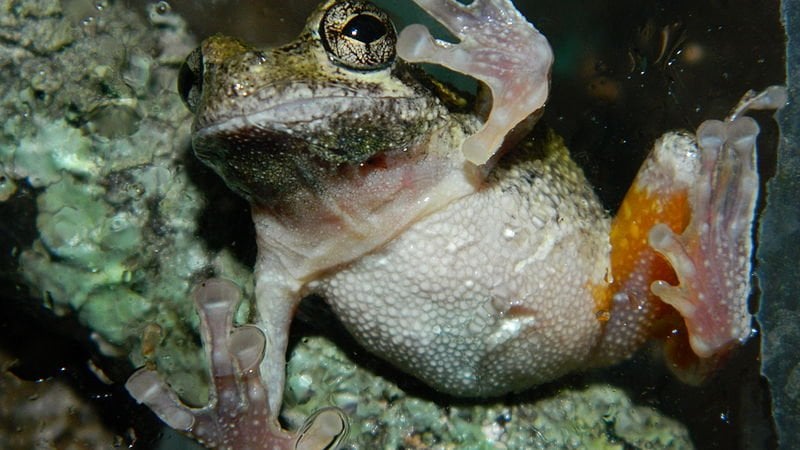 Researchers say this study supports the multitasking hypothesis. The hypothesis suggests females prefer males who can do two or more things at once, as these are considered to be "good quality" males. This image shows a male Hyla chrysoscelis frog.
Home
Featured

From frogs to humans, selecting a mate is complicated. Females of many species judge suitors based on many indicators of health or parenting potential. But it can be difficult for males to produce multiple signals that demonstrate these qualities simultaneously.

In a study of gray tree frogs, a team of University of Minnesota researchers discovered that females prefer males whose calls reflect the ability to multitask effectively. In this species (Hyla chrysoscelis) males produce “trilled” mating calls that consist of a string of pulses.

Typical calls can range in duration from 20-40 pulses per call and occur between 5-15 calls per minute. Males face a trade-off between call duration and call rate, but females preferred calls that are longer and more frequent, which is no simple task.

The findings were published in August issue of Animal Behavior.

“It’s kind of like singing and dancing at the same time,” says Jessica Ward, a postdoctoral researcher who is lead author for the study. Ward works in the laboratory of Mark Bee, a professor in the College of Biological Sciences’ Department of Ecology, Evolution and Behavior.

The study supports the multitasking hypothesis, which suggests that females prefer males who can do two or more hard-to-do things at the same time because these are especially good quality males, Ward says. The hypothesis, which explores how multiple signals produced by males influence female behavior, is a new area of interest in animal behavior research.

By listening to recordings of 1,000 calls, Ward and colleagues learned that males are indeed forced to trade off call duration and call rate. That is, males that produce relatively longer calls only do so at relatively slower rates.

“It’s easy to imagine that we humans might also prefer multitasking partners, such as someone who can successfully earn a good income, cook dinner, manage the finances and get the kids to soccer practice on time.”

Important Change in B-Cells in Women With Postpartum Depression

The study was carried out in connection with Bee’s research goal, which is understanding how female frogs are able to distinguish individual mating calls from a large chorus of males. By comparison, humans, especially as we age, lose the ability to distinguish individual voices in a crowd. This phenomenon, called the “cocktail party” problem, is often the first sign of a diminishing ability to hear. Understanding how frogs hear could lead to improved hearing aids.