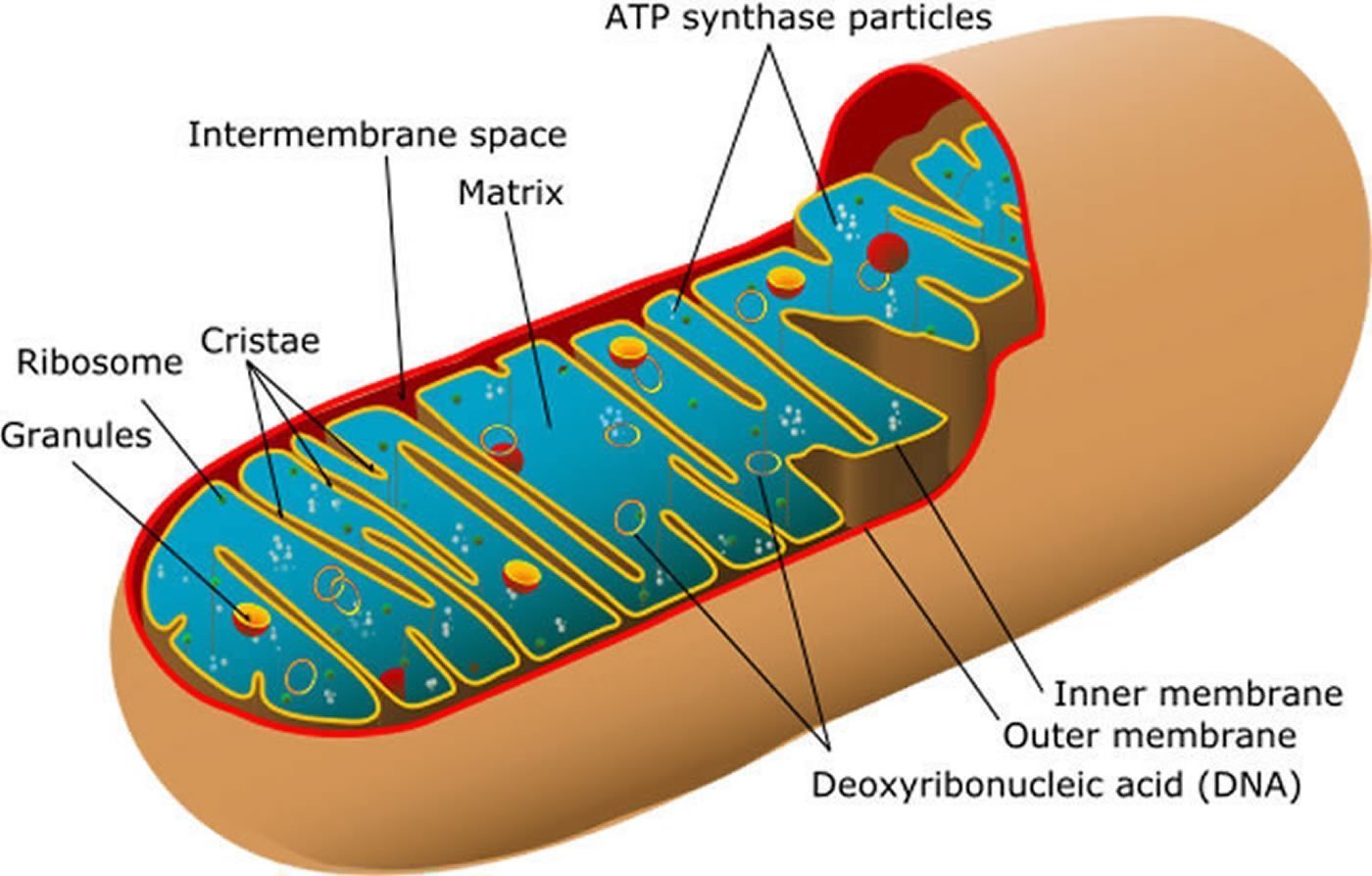 The results highlight the potential for humanin and other mitochondrial proteins to become treatments for age-related ailments. Image is in the public domain.

Protein in mitochondria appears to regulate health and longevity

Summary: Humanin, a peptide encoded in mitochondria, appears to have a beneficial impact on both health and longevity in both humans and animals. Higher levels of humanin in the body are associated with longer life spans and a reduced risk of neurodegenerative disorders, like Alzheimer’s disease.

A new study led by researchers at the USC Leonard Davis School of Gerontology is the first to demonstrate that a tiny protein has a big impact on health and longevity in both animals and humans.

The researchers examined humanin, a peptide encoded in the small genome of mitochondria — the powerhouses of the cell. From experiments in laboratory animals to measurements in human patients, the multi-site collaboration demonstrates how higher levels of humanin in the body are connected to longer lifespans and better health. It is linked to a lower risk for diseases such as Alzheimer’s.

“Humanin has long been known to help prevent many age-related diseases, and this is the first time that it has been shown that it can also increase lifespan,” said senior author Pinchas Cohen, professor of gerontology, medicine and biological sciences and dean of the USC Leonard Davis School.

Humanin has been found not only in human mitochondria but also throughout the animal kingdom, a sign that its related gene has been maintained, or conserved, throughout evolution. The study, which was published online in the journal Aging on June 23, examined humanin in several animal species, including worms and mice, as well as humans, including Alzheimer’s patients and children of centenarians.

The results highlight the potential for humanin and other mitochondrial proteins to become treatments for age-related ailments. They also indicate that humanin may be an ancient mitochondrial signaling mechanism that is key for regulating the body’s health and lifespan, said first author and USC Leonard Davis Research Assistant Professor Kelvin Yen.

Humanin levels have previously been observed to decrease with age in many species. In this new study, the scientists observed higher levels of humanin in organisms predisposed to long lives, including the famously age-resistant naked mole rat, which experiences only a very slow decline in levels of humanin circulating in the body throughout its 30-year lifespan.

In contrast, mice experience a 40% drop in humanin over the first 18 months of life, and primates such as rhesus macaques appeared to have a similarly dramatic drop in humanin between the ages of 19 and 25.

In humans, researchers observed this phenomenon of higher and more sustained levels of humanin in 18 children of centenarians, versus a control group of 19 children of non-centenarians. Individuals whose parents reach 100 years old are statistically more likely than other people to reach very old age.

In some species, including worms and mice, modifying their genes to produce higher amounts of humanin within their bodies was enough to significantly increase lifespans. But these longer-lived animals had fewer offspring. Scientists have observed a similar pattern in long-lived humans.

“This tradeoff between longevity and reproduction is thought to be due to an evolutionarily conserved balance between using energy to produce more offspring or using the energy to maintain the organism for future reproductive efforts,” Yen said. “Evolutionarily speaking, the goal of life is to reproduce and then you’re done, but if you can’t reproduce, you should try to hang around as long as possible, and a side effect of that is longevity.”

Indication of – and protection against – disease

The researchers analyzed samples of cerebral spinal fluid from a small number of Alzheimer’s patients and control individuals without dementia and noticed that humanin levels were much lower in the Alzheimer’s patients. And in newborn cord blood samples, high levels of humanin correlated with a high mitochondrial DNA (mtDNA) copy number, or the number of copies of the mitochondrial genome present within each cell.

“Humanin levels are inversely correlated with a decrease in mitochondrial DNA (mtDNA) copy number, which in itself has been associated with a number of different diseases such as cancer, kidney disease, and cardiovascular disease,” Yen said.

Cohen’s laboratory was one of three groups that independently discovered humanin and has continued to unlock the secrets of the mitochondrial genome. Other promising mitochondrial peptides characterized by Cohen’s team include MOTS-c, which plays a role in communication between the mitochondria and the nucleus in cells and appears to mimic the effects of exercise.

This new wide-ranging study highlights the importance of humanin as a potentially powerful regulator of lifespan and health, and harnessing it for treatments could address a variety of age-related illnesses, Cohen said.

“This study, as well as many others, suggest that humanin administration would be an effective therapeutic treatment for a large number of diseases and further solidifies the importance of the mitochondria beyond its traditional role as the ‘powerhouse of the cell,'” he said.

Humanin is a member of a new family of peptides that are encoded by short open reading frames within the mitochondrial genome. It is conserved in animals and is both neuroprotective and cytoprotective. Here we report that in C. elegans the overexpression of humanin is sufficient to increase lifespan, dependent on daf-16/Foxo. Humanin transgenic mice have many phenotypes that overlap with the worm phenotypes and, similar to exogenous humanin treatment, have increased protection against toxic insults. Treating middle-aged mice twice weekly with the potent humanin analogue HNG, humanin improves metabolic healthspan parameters and reduces inflammatory markers. In multiple species, humanin levels generally decline with age, but here we show that levels are surprisingly stable in the naked mole-rat, a model of negligible senescence. Furthermore, in children of centenarians, who are more likely to become centenarians themselves, circulating humanin levels are much greater than age-matched control subjects. Further linking humanin to healthspan, we observe that humanin levels are decreased in human diseases such as Alzheimer’s disease and MELAS (Mitochondrial Encephalopathy, Lactic Acidosis, and Stroke-like episodes). Together, these studies are the first to demonstrate that humanin is linked to improved healthspan and increased lifespan.