If you’re so smart, why aren’t you rich? It may be that, when it comes to stock market success, your brain is heeding the wrong neural signals.

In a study in the Proceedings of the National Academy of Sciences this week, scientists at the Virginia Tech Carilion Research Institute and Caltech found that, when they simulated market conditions for groups of investors, economic bubbles — in which the price of something could differ greatly from its actual value — invariably formed.

Even more remarkably, the researchers discovered a correlation between specific brain activity patterns and sensitivity to those bubbles.

“Stock market bubbles form when people collectively overvalue something, creating what economist Alan Greenspan once famously called ‘irrational exuberance,'” said Read Montague, director of the Human Neuroimaging Laboratory at the Virginia Tech Carilion Research Institute and one of the study’s senior authors. “Our experiments showed how the collective behavior of market participants created price bubbles, suggesting that neural activity might offer biomarkers for the evolution of such bubbles.” 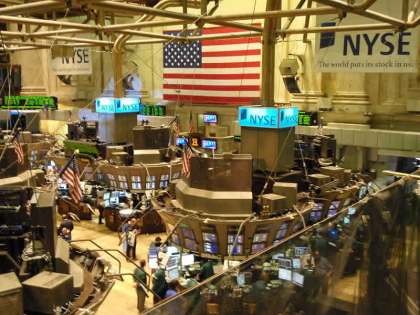 At some point during the 50 trading periods of each session, a price bubble would invariably form and crash. The scientists had suspected that crowd cognition would result in some bubble formation, though they had not expected it to happen every time. This image is for illustrative purposes only. Credit Ryan Lawler.

Montague and colleagues enrolled 320 subjects in a market-trading simulation game. Up to two dozen participants played in each of 16 market sessions, with two or three participants simultaneously having their brains scanned using functional magnetic resonance imaging, or fMRI, a noninvasive technique that allows scientists to use microscopic blood-flow measurements as a proxy for brain activity.

At some point during the 50 trading periods of each session, a price bubble would invariably form and crash. The scientists had suspected that crowd cognition would result in some bubble formation, though they had not expected it to happen every time.

What surprised the scientists even more were the distinctive brain activity patterns that emerged among the low earners and high earners.

Traders who bought more aggressively based on activity in one brain region, the nucleus accumbens, earned less.

In contrast, the high earners seemed to ignore nucleus accumbens activity in favor of the anterior insular cortex, a brain area active during bodily discomfort and unpleasant emotional states.

Just before a bubble peaked – as their brain scans were revealing an increased activity in the anterior insula – the high earners would begin to sell their shares.

The scientists believe the high earners’ brain activity may represent a neural early warning signal of an impending crash.

“It’s notoriously hard to identify stock market bubbles and predict crashes by tracking price fluctuations alone,” said Colin Camerer, a behavioral economist at Caltech and the study’s other senior author. “This experimental method is ideal for understanding the neuropsychology of bubble formation, because we can control the fundamental values and use both prices and brain activity to figure out why bubbles form and crash.”

The model may also shed light on other contexts in which groups – and individuals – overvalue something, Montague said.

“This neurobehavioral metric could be used to help quantify situations in which people place excessive value on poor choices, such as drug addiction, compulsive gambling, or overeating,” he said.

Montague, who uses computational models to understand neuropsychiatric conditions, noted that the study could not have been conducted without two relatively new additions to the neuroscientist’s toolbox: fMRI and hyperscanning.

Hyperscanning, a cloud-based technique that enables multiple subjects in different brain scanners to interact in real time, whether across rooms or across continents, allows scientists to study live human interactions.

Montague likens the technique, which he and his team developed just over a decade ago, to being able to eavesdrop on an entire cocktail party conversation, rather than the monologue fMRI enables.

Why eavesdrop at all?

“We’re wired to be social,” Montague said. “People are exquisitely sensitive to the social gestures of others, and understanding that sensitivity may provide important clues not just to personal and group interactions, but to mental disorders as well. At the heart of many mental disorders is a deficit in the ability to interact with others.”

“The brain can provide us with valuable information about what someone may be perceiving about the market and what they’re likely to do next,” Montague said. “That gut feeling the high earners had? It was all in their heads.”