Your brain shows if you are lonely or not 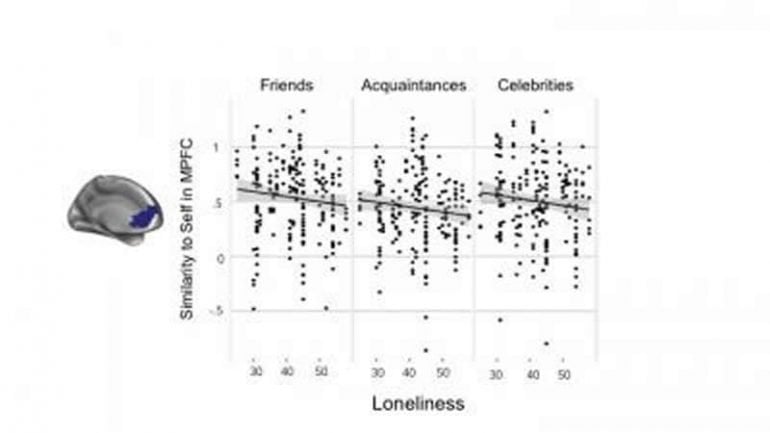 Summary: In the medial prefrontal cortex, loneliness is associated with a reduced representational similarity between the self and others. Feeling socially disconnected may be mirrored by a self-representation of being a “loner.”

Social connection with others is critical to a person’s mental and physical well-being. How the brain maps relationships with other people in relation to one’s self has long been a mystery. A Dartmouth study finds that the closer you feel to people emotionally, the more similarly you represent them in your brain. In contrast, people who feel social disconnection appear to have a lonelier, neural self-representation. The findings are published in the Journal of Neuroscience. 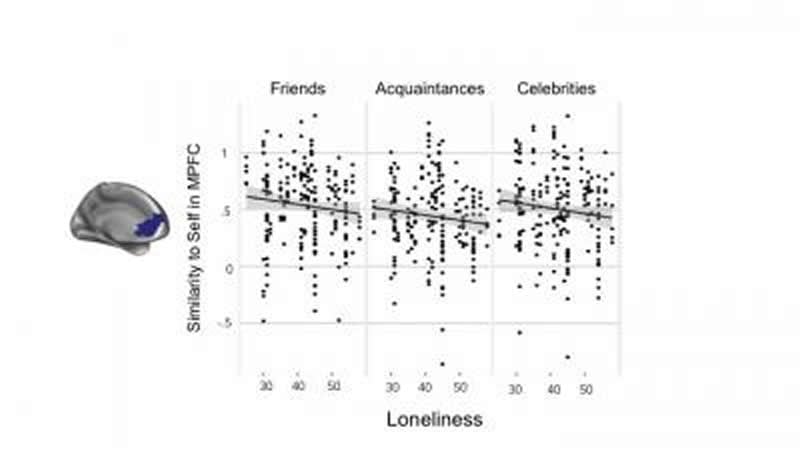 The results showed how the brain seemed to cluster representations of people into three different cliques: 1) oneself, 2) one’s own social network, and 3) well-known people, like celebrities. The closer participants felt to someone, the more similarly their brain represented them throughout the social brain, including in the medial prefrontal cortex (MPFC), the region associated with the concept of self. Lonelier people showed less neural similarity between themselves and others in the MPFC, and the demarcations between the three cliques was blurrier in their neural activity. In other words, the lonelier people are, the less similar their brain looks when they think about themselves and others.

The findings illustrate how loneliness seems to be associated with distortions in the neural mapping of social connections with others.

Depressive Disorders Can Lead to Changes in Immune Cells

Social connection is critical to well-being, yet how the brain reflects our attachment to other people remains largely unknown. We combined univariate and multivariate brain imaging analyses to assess whether and how the brain organizes representations of others based on how connected they are to our own identity. During an fMRI scan, female and male human participants (N=43) completed a self- and other-reflection task for 16 targets: the self, five close others, five acquaintances, and five celebrities. In addition, they reported their subjective closeness to each target and their own trait loneliness. We examined neural responses to the self and others in a brain region that has been associated with self-representation (medial prefrontal cortex; MPFC) and across the whole brain. The structure of self-other representation in the MPFC and across the social brain appeared to cluster targets into three social categories: the self, social network members (including close others and acquaintances), and celebrities. Moreover, both univariate activation in MPFC and multivariate self-other similarity in MPFC and across the social brain increased with subjective self-other closeness ratings. Critically, participants who were less socially connected (i.e. lonelier) showed altered self-other mapping in social brain regions. Most notably, in MPFC, loneliness was associated with reduced representational similarity between the self and others. The social brain apparently maintains information about broad social categories as well as closeness to the self. Moreover, these results point to the possibility that feelings of chronic social disconnection may be mirrored by a ‘lonelier’ neural self-representation.

Social connection is critical to well-being, yet how the brain reflects our attachment to people remains unclear. We found that the social brain stratifies neural representations of people based on our subjective connection to them, separately clustering people who are and are not in our social network. Moreover, the people we feel closest to are represented most closely to ourselves. Finally, lonelier individuals also appeared to have a ‘lonelier’ neural self-representation in the MPFC, as loneliness attenuated the closeness between self and other neural representations in this region. The social brain appears to map our interpersonal ties, and alterations in this map may help explain why lonely individuals endorse statements such as ‘people are around me but not with me.’