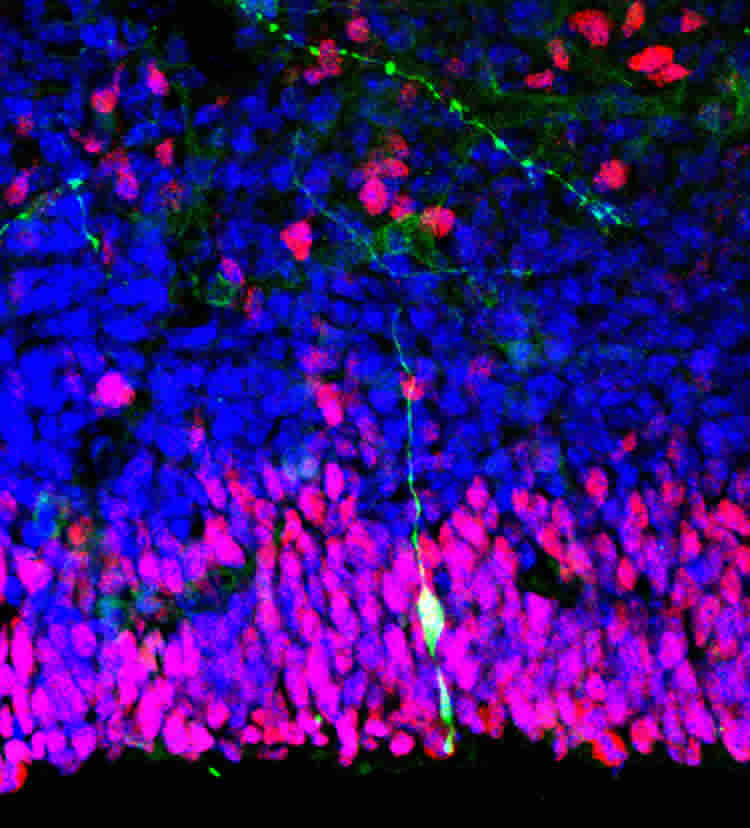 Neural stem cells become the major types of cells in the brain, including the neurons that process and transmit information and the glial cells that support and protect them. This image of neural stem cells is for illustrative purposes only and is not connected to the research. Credit Joseph Elsbernd.

People with autism spectrum disorder often experience a period of accelerated brain growth after birth. No one knows why, or whether the change is linked to any specific behavioral changes.

A new study by UCLA researchers demonstrates how, in pregnant mice, inflammation, a first line defense of the immune system, can trigger an excessive division of neural stem cells that can cause “overgrowth” in the offspring’s brain.

The paper appears Oct. 9 in the online edition of the journal Stem Cell Reports.

“We have now shown that one way maternal inflammation could result in larger brains and, ultimately, autistic behavior, is through the activation of the neural stem cells that reside in the brain of all developing and adult mammals,” said Dr. Harley Kornblum, the paper’s senior author and a director of the Neural Stem Cell Research Center at UCLA’s Semel Institute for Neuroscience and Human Behavior.

In the study, the researchers mimicked environmental factors that could activate the immune system — such as an infection or an autoimmune disorder — by injecting a pregnant mouse with a very low dose of lipopolysaccharide, a toxin found in E. coli bacteria. The researchers discovered the toxin caused an excessive production of neural stem cells and enlarged the offspring’s’ brains.

Neural stem cells become the major types of cells in the brain, including the neurons that process and transmit information and the glial cells that support and protect them.

Notably, the researchers found that mice with enlarged brains also displayed behaviors like those associated with autism in humans. For example, they were less likely to vocalize when they were separated from their mother as pups, were less likely to show interest in interacting with other mice, showed increased levels of anxiety and were more likely to engage in repetitive behaviors like excessive grooming.

Kornblum, who also is a professor of psychiatry, pharmacology and pediatrics at the David Geffen School of Medicine at UCLA, said there are many environmental factors that can activate a pregnant woman’s immune system.

“Although it’s known that maternal inflammation is a risk factor for some neurodevelopmental disorders such as autism, it’s not thought to directly cause them,” he said. He noted that autism is clearly a highly heritable disorder, but other, non-genetic factors clearly play a role.

The researchers also found evidence that the brain growth triggered by the immune reaction was even greater in mice with a specific genetic mutation — a lack of one copy of a tumor suppressor gene called phosphatase and tensin homolog, or PTEN. The PTEN protein normally helps prevent cells from growing and dividing too rapidly. In humans, having an abnormal version of the PTEN gene leads to very large head size or macrocephaly, a condition that also is associated with a high risk for autism.

“Autism is a complex group of disorders, with a variety of causes,” Kornblum said. “Our study shows a potential way that maternal inflammation could be one of those contributing factors, even if it is not solely responsible, through interactions with known risk factors.”

In addition, the team found that the proliferation of neural stem cell and brain overgrowth was stimulated by the activation of a specific molecular pathway. (A pathway is a series of actions among molecules within a cell that leads to a certain cell function.) This pathway involved the enzyme NADPH oxidase, which the UCLA researchers have previously found to be associated with neural stem cell growth.

“The discovery of these mechanisms has identified new therapeutic targets for common autism-associated risk factors,” said Janel Le Belle, an associate researcher in Kornblum’s lab and the paper’s lead author. “The molecular pathways that are involved in these processes are ones that can be manipulated and possibly even reversed pharmacologically.

“In agreement with past clinical findings, these data add to the significant evidence that autism-associated brain alterations begin prenatally and continue to evolve after birth,” she said.

Kornblum added that the findings that neural stem cell hyper-proliferation can contribute to autism-associated features may be somewhat surprising. “Autism neuropathology is primarily thought of as a dysregulation of neuronal connectivity, although the molecular and cellular means by which this occurs is not known,” he said. “Therefore, our hypothesis — that one potential means by which autism may develop is through an overproduction of cells in the brain, which then results in altered connectivity — is a new way of thinking about autism etiology.”

The next step, the researchers say, is to determine if and how the changes they observed lead to changes in the connections between brain cells, and if those effects can be altered after they have happened.

The study’s other authors were Jantzen Sperry, Amy Ngo, Yasmin Ghochani, Dan Laks, Manuel López Aranda and Alcino Silva, all of UCLA. Support was provided by the Dr. Miriam and Sheldon G. Adelson Medical Research Foundation, Autism Speaks and the National Institutes of Health (grants P50-HD-055784 and MH65756), and other entities.