People who hear voices that other people can’t hear may use unusual skills when their brains process new sounds, according to research led by Durham University and University College London (UCL).

The study, published in the academic journal Brain, found that voice-hearers could detect disguised speech-like sounds more quickly and easily than people who had never had a voice-hearing experience.

The findings suggest that voice-hearers have an enhanced tendency to detect meaningful speech patterns in ambiguous sounds.

The researchers say this insight into the brain mechanisms of voice-hearers tells us more about how these experiences occur in voice-hearers without a mental health problem, and could ultimately help scientists and clinicians find more effective ways to help people who find their voices disturbing.

The study involved people who regularly hear voices, also known as auditory verbal hallucinations, but do not have a mental health problem.

Participants listened to a set of disguised speech sounds known as sine-wave speech while they were having an MRI brain scan. Usually these sounds can only be understood once people are either told to listen out for speech, or have been trained to decode the disguised sounds.

Sine-wave speech is often described as sounding a bit like birdsong or alien-like noises. However, after training people can understand the simple sentences hidden underneath (such as “The boy ran down the path” or “The clown had a funny face”).

In the experiment, many of the voice-hearers recognised the hidden speech before being told it was there, and on average they tended to notice it earlier than other participants who had no history of hearing voices.

Lead author Dr Ben Alderson-Day, Research Fellow from Durham University’s Hearing the Voice project, said: “These findings are a demonstration of what we can learn from people who hear voices that are not distressing or problematic.

“It suggests that the brains of people who hear voices are particularly tuned to meaning in sounds, and shows how unusual experiences might be influenced by people’s individual perceptual and cognitive processes.”

People who hear voices often have a diagnosis of a mental health condition such as schizophrenia or bipolar disorder. However, not all voice-hearers have a mental health problem.

Research suggests that between five and 15 per cent of the general population have had an occasional experience of hearing voices, with as many as one per cent having more complex and regular voice-hearing experiences in the absence of any need for psychiatric care.

Co-author Dr Cesar Lima from UCL’s Speech Communication Lab commented: “We did not tell the participants that the ambiguous sounds could contain speech before they were scanned, or ask them to try to understand the sounds. Nonetheless, these participants showed distinct neural responses to sounds containing disguised speech, as compared to sounds that were meaningless.

“This was interesting to us because it suggests that their brains can automatically detect meaning in sounds that people typically struggle to understand unless they are trained.”

The research is part of a collaboration between Durham University’s Hearing the Voice project, a large interdisciplinary study of voice-hearing funded by the Wellcome Trust, and UCL’s Speech Communication lab. 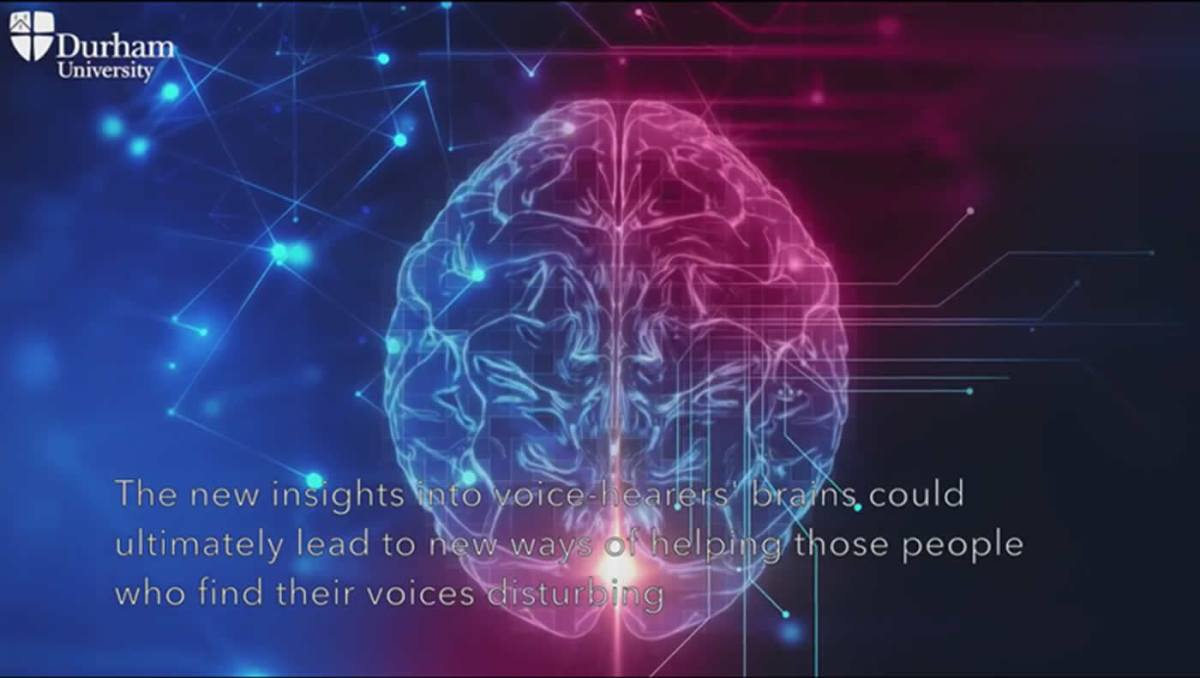 The new insights into voice hearers’ brains could ultimately lead to new ways of helping those people who find the voices disturbing. NeuroscienceNews.com image is adapted from the Durham University news release.

Durham’s Hearing the Voice project aims to develop a better understanding of the experience of hearing a voice when no one is speaking. The researchers want to increase understanding of voice-hearing by examining it from different academic perspectives, working with clinicians and other mental health professionals, and listening to people who have heard voices themselves.

In the long term, it is hoped that the research will inform mental health policy and improve therapeutic practice in cases where people find their voices distressing and clinical help is sought.

Professor Charles Fernyhough, Director of Hearing the Voice at Durham University, said: ‘This study brings the expertise of UCL’s Speech Communication lab together with Durham’s Hearing the Voice project to explore what is a frequently troubling and widely misunderstood experience.”

Professor Sophie Scott from UCL Speech Communication Lab added: “This is a really exciting demonstration of the ways that unusual experiences with voices can be linked to – and may have their basis in – everyday perceptual processes.”

Auditory verbal hallucinations (hearing voices) are typically associated with psychosis, but a minority of the general population also experience them frequently and without distress. Such ‘non-clinical’ experiences offer a rare and unique opportunity to study hallucinations apart from confounding clinical factors, thus allowing for the identification of symptom-specific mechanisms. Recent theories propose that hallucinations result from an imbalance of prior expectation and sensory information, but whether such an imbalance also influences auditory-perceptual processes remains unknown. We examine for the first time the cortical processing of ambiguous speech in people without psychosis who regularly hear voices. Twelve non-clinical voice-hearers and 17 matched controls completed a functional magnetic resonance imaging scan while passively listening to degraded speech (‘sine-wave’ speech), that was either potentially intelligible or unintelligible. Voice-hearers reported recognizing the presence of speech in the stimuli before controls, and before being explicitly informed of its intelligibility. Across both groups, intelligible sine-wave speech engaged a typical left-lateralized speech processing network. Notably, however, voice-hearers showed stronger intelligibility responses than controls in the dorsal anterior cingulate cortex and in the superior frontal gyrus. This suggests an enhanced involvement of attention and sensorimotor processes, selectively when speech was potentially intelligible. Altogether, these behavioural and neural findings indicate that people with hallucinatory experiences show distinct responses to meaningful auditory stimuli. A greater weighting towards prior knowledge and expectation might cause non-veridical auditory sensations in these individuals, but it might also spontaneously facilitate perceptual processing where such knowledge is required. This has implications for the understanding of hallucinations in clinical and non-clinical populations, and is consistent with current ‘predictive processing’ theories of psychosis.

Feel free to share this Neuroscience News.
No more articles