Summary: The loss of TRESK significantly increases the risk of developing headaches and may be implicated in migraines.

Defective potassium channels involved in pain detection can increase the chance of developing a headache and could be implicated in migraines, according to research in mice published in eNeuro.

A type of potassium channel called TRESK is thought to control the excitability of peripheral sensory neurons that detect pain, heat, cold, and touch. Even though these channels are found throughout the neurons sensing both body and facial pain, channel mutations are linked only with headaches and not body pain.

Yu-Qing Cao and colleagues at Washington University in St. Louis analyzed a knock-out mouse with defective TRESK channels and measured the resulting neural activity. The researchers found that only facial pain receptors were more excitable and that the sensory neurons had more spontaneous activity. Using behavioral tests, the scientists observed that the knock-out mice showed increased sensitivity to temperature and touch stimuli on their faces, as well as more headache-related behaviors, but no body pain behaviors. 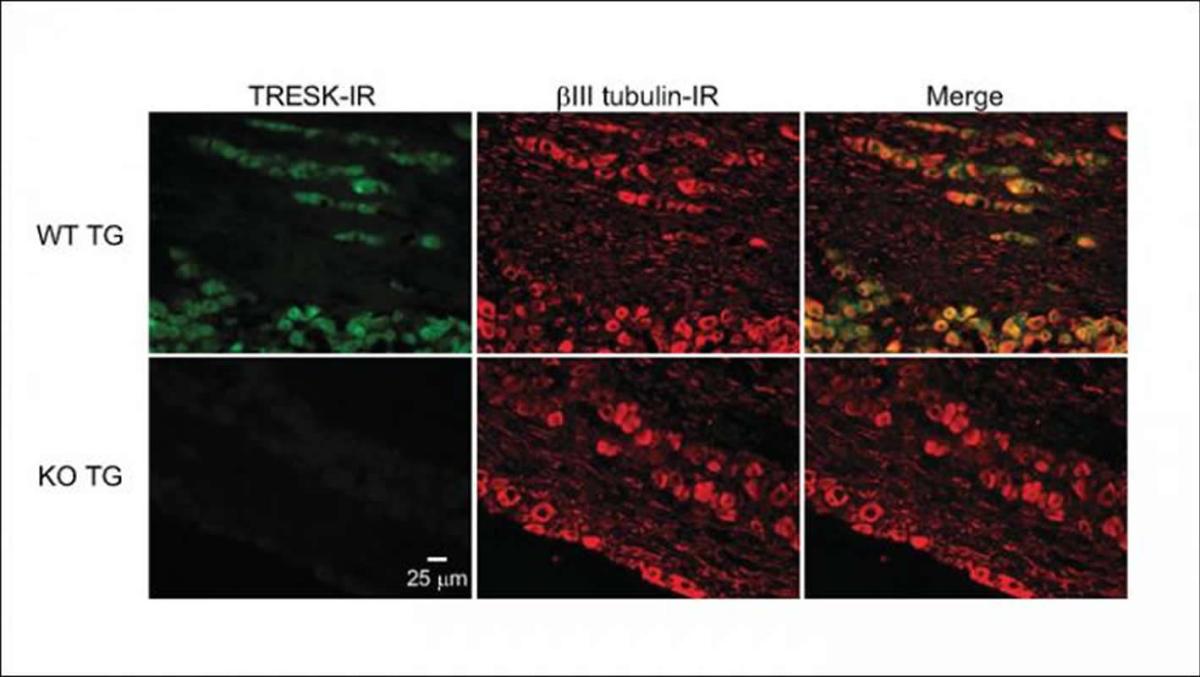 These results indicate that TRESK channels have cell-specific roles and are responsible for regulating pain in facial sensory neurons, making them a target for migraine treatment research.

Although TWIK-related spinal cord K+ (TRESK) channel is expressed in all primary afferent neurons in trigeminal ganglia (TG) and dorsal root ganglia (DRG), whether TRESK activity regulates trigeminal pain processing is still not established. Dominant-negative TRESK mutations are associated with migraine but not with other types of pain in humans, suggesting that genetic TRESK dysfunction preferentially affects the generation of trigeminal pain, especially headache. Using TRESK global knockout mice as a model system, we found that loss of TRESK in all TG neurons selectively increased the intrinsic excitability of small-diameter nociceptors, especially those that do not bind to isolectin B4 (IB4−). Similarly, loss of TRESK resulted in hyper-excitation of the small IB4− dural afferent neurons but not those that bind to IB4 (IB4+). Compared with wild-type littermates, both male and female TRESK knockout mice exhibited more robust trigeminal nociceptive behaviors, including headache-related behaviors; whereas their body and visceral pain responses were normal. Interestingly, neither the total persistent outward current nor the intrinsic excitability was altered in adult TRESK knockout DRG neurons, which may explain why genetic TRESK dysfunction is not associated with body and/or visceral pain in humans. We reveal for the first time that, among all primary afferent neurons, TG nociceptors are the most vulnerable to the genetic loss of TRESK. Our findings indicate that endogenous TRESK activity regulates trigeminal nociception, likely through controlling the intrinsic excitability of TG nociceptors. Importantly, we provide evidence that genetic loss of TRESK significantly increases the likelihood of developing headache.

TRESK K+ channel is expressed in all primary afferent neurons in trigeminal ganglia (TG) and dorsal root ganglia (DRG), but dominant-negative TRESK mutations are only associated with migraine but not with other types of pain in humans. In TRESK global knockout mice, we found that ubiquitous loss of TRESK selectively increased the intrinsic excitability of small-diameter TG nociceptors without affecting DRG neuronal excitability. Compared with wild-type littermates, TRESK knockout mice exhibited more robust trigeminal pain, especially headache-related behaviors; whereas their body and visceral pain responses were normal. This recapitulates the clinical manifestations of human TRESK mutations. Our results indicate that endogenous TRESK activity regulates trigeminal nociception, and genetic loss of TRESK significantly increases the likelihood of developing headache.