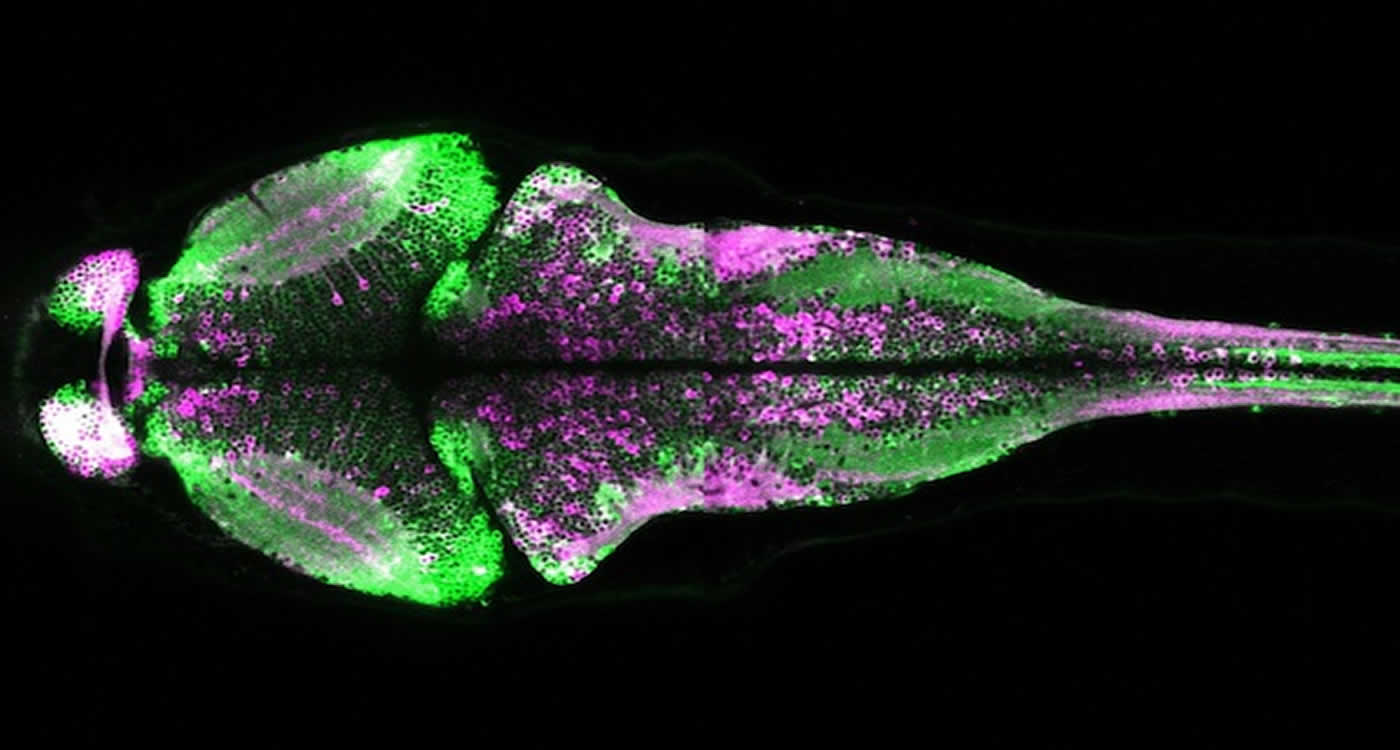 A new tool developed at the Howard Hughes Medical Institute’s Janelia Research Campus lets scientists shine a light on an animal’s brain to permanently mark neurons that are active at a particular time. The tool — a fluorescent protein called CaMPARI — converts from green to red when calcium floods a nerve cell after the cell fires. The permanent mark frees scientists from the need to focus a microscope on the right cells at the right time to observe neuronal activity.

Calcium-sensitive fluorescent molecules called GCaMP emit a fluorescent signal that indicates neural activity, and are useful for following the dynamics of neural networks. But their signal is temporary, and if researchers miss it because the microscope is not focused on the right spot in the brain, the information is lost. With CaMPARI, researchers can visualize neural activity beyond a microscope’s limited field of view, capturing a snapshot of neural activity across wide swaths of brain tissue. The new tool also enables scientists to visualize neural activity during more complicated behaviors than previous calcium indicators, because in many cases it can be used while animals move freely, rather than being confined to a dish or embedded in agar.

“The most enabling thing about this technology may be that you don’t have to have your organism under a microscope during your experiment,” says Loren Looger, a group leader and protein chemist at Janelia who engineers tools to study the brain. “So we can now visualize neural activity in fly larvae crawling on a plate or fish swimming in a dish.”

Looger, Eric Schreiter, and their colleagues report on CaMPARI and its ability to label active neural circuits in fruit flies, zebrafish, and mice in the February 13, 2015, issue of the journal Science.

Schreiter, a senior scientist in Looger’s lab, led the development of CaMPARI, working as part of Janelia’s Genetically-Encoded Neuronal Indicator and Effector (GENIE) project team. GENIE is an interdisciplinary team dedicated to engineering fluorescent sensors that facilitate the imaging of neuronal activity in living organisms. Project teams are like small start-up companies within Janelia and were created to tackle biological problems that require collaboration across multiple labs.

A snapshot of zebrafish brain activity captured using CaMPARI. The microscope scans through a four-day-old zebrafish brain show neurons that were more active (magenta) or less active (green) while the fish was freely swimming around. (HHMI/Janelia Research Campus)

To make CaMPARI, the team started with a fluorescent protein called Eos. Eos emits a green fluorescence until it is exposed to violet light, which permanently alters the protein so that it fluoresces in red. “That was the perfect starting place,” says Schreiter. “That conversion from green to red gives us a permanent signal. So we just needed a way to couple that conversion to the activity that’s going on in the cell.” To do that, the scientists incorporated a calcium-sensitive protein known as calmodulin, which makes the color change dependent on the burst of calcium that accompanies neural activity. It’s the same domain that scientists added to fluorescent proteins to make calcium-responsive GCaMP sensors.

To find a useful protein that switches the color of its fluorescence only in the presence of both calcium and an activating violet light, the researchers made and screened tens of thousands of subtly different proteins. “When we finally got one that photoconverted more with calcium than without it, we knew we had a tool. We just needed to make it better to get it to the point where another neuroscientist could sit down and use it,” says first author Ben Fosque, a graduate student in the biochemistry and molecular biophysics program at the University of Chicago.

The team spent more than a year tweaking their protein – making it brighter and more responsive to calcium and ensuring that it would work in cells and then in living mice, fruit flies, and zebrafish. In the end, they had a tool that they named CaMPARI, which stands for calcium-modulated photoactivatable ratiometric integrator.

The need to use violet light in converting the protein’s fluorescence gives experimenters control over the time period during which neural activity is tracked. “Ideally, we can flip the light switch on while an animal is doing the behavior that we care about, then flip the switch off as soon as the animal stops doing the behavior,” Schreiter explains. “Then we’re capturing a snapshot of only the activity that occurs while the animal is doing that behavior.”

The scientists conducted a series of experiments to demonstrate CaMPARI’s effectiveness. In one set of experiments, they captured a snapshot of neuronal activity over the entire brain volume of a zebrafish during a ten-second period as it swam in a dish. Following the experiment, CaMPARI was red in motor neurons known to be involved in swimming, as well as other expected sets of neurons–consistent with observations made by other scientists during electrophysiology experiments. The activation patterns changed significantly when the researchers altered the temperature or turbulence of the water.

In fruit flies, the team used CaMPARI to identify neurons that were activated in response to specific odors. Here too, the observations were as expected based on previous experiments: CaMPARI indicated that different odors activated distinct sets of neurons in the flies’ antennal lobes. In a subsequent set of experiments, the researchers experimentally activated the neurons that directly responded to the odors, then looked for neurons elsewhere in the brain that subsequently turned red. Those experiments revealed neurons that Schreiter says may be secondary, tertiary, or even quaternary components to the olfactory circuits. Tracing a circuit from one neuron to the next is difficult under a microscope, the scientists say, because cell projections and their connections to other cells generally extend beyond the instrument’s field of view.

With ongoing development, the scientists expect future versions of CaMPARI will be more sensitive and reliable than the current tool. But Looger says it’s important to get CaMPARI into the hands of neuroscientists right away. “The idea is probably more powerful than the tool, as it stands right now,” he says. “We will definitely benefit from a couple hundred—hopefully a thousand—labs taking CaMPARI and seeing what they can do with it.”