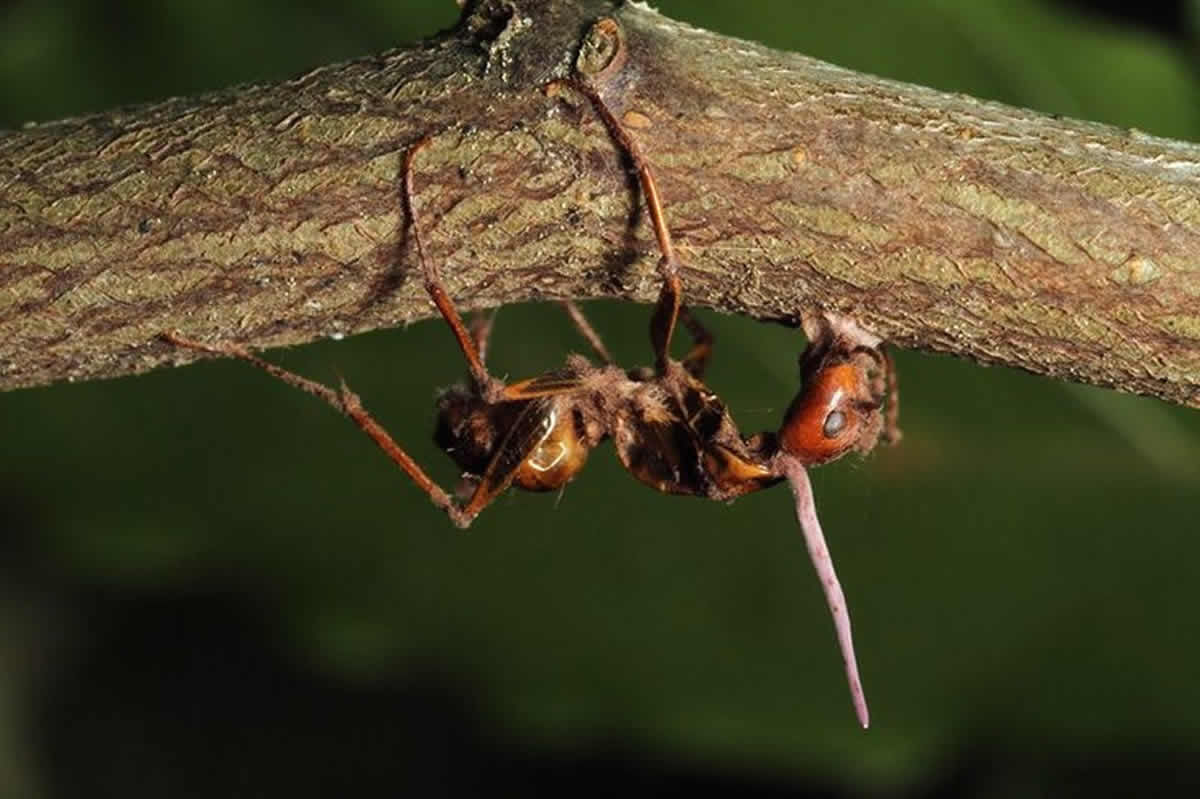 A parasitic fungus that reproduces by manipulating the behavior of ants emits a cocktail of behavior-controlling chemicals when encountering the brain of its natural target host, but not when infecting other ant species, a new study shows.

The findings, which suggest that the fungus “knows” its preferred host, provide new insights into the molecular mechanisms underlying this phenomenon, according to researchers.

“Fungi are well known for their ability to secrete chemicals that affect their environment,” noted lead author Charissa de Bekker, a Marie Curie Fellow in Penn State’s College of Agricultural Sciences, and Ludwig Maximilian of the University of Munich. “So we wanted to know what chemicals are employed to control so precisely the behavior of ants.”

The research focused on a species from the genus Ophiocordyceps — known as “zombie ant fungi” — which control their ant hosts by inducing a biting behavior. Although these fungi infect many insects, the species that infect ants have evolved a mechanism that induces hosts to die attached by their mandibles to plant material, providing a platform from which the fungus can grow and shoot spores to infect other ants.

To study this mechanism, the researchers combined field research with a citizen-scientist in South Carolina, infection experiments under laboratory conditions and analysis using metabolomics, which is the study of the chemical processes associated with the molecular products of metabolism.

The scientists used a newly discovered fungal species from North America — initially called Ophiocordyceps unilateralis sensu lato while it awaits a new name — that normally controls an ant species in the genus Camponotus. To test whether a species of fungus that has evolved to control the behavior of one ant species can infect and control others, they infected nontarget hosts from the same ant genus and another genus (Formica).

They found that this obligate killer can infect and kill nontarget ants, but it cannot manipulate their behavior. “The brain of the target species was the key to understanding manipulation,” de Bekker said.

The researchers next removed ant brains, keeping the organs alive in special media. The fungus then was grown in the presence of brains from different ant species to determine what chemicals it produced for each brain.

“This was ‘brain-in-a-jar’ science at its best,” said co-author David Hughes, assistant professor of entomology and biology, Penn State. “It was necessary to reduce the complexity associated with the whole, living ant, and just ask what chemicals the fungus produces when it encounters the ant brain.

“You don’t get to see a lot of behavior with fungi,” he said. “You have to infer what they are doing by examining how they grow, where they grow and most important, what chemicals they secrete.”

He explained that fungi are nourished via osmotrophy, by which they secrete compounds that degrade the bigger molecules in their environment into smaller ones that then can be taken up by the fungus. Using metabolomics, the researchers could determine precisely the chemical crosstalk between the fungus and the ant brain it grew alongside.

“We could see in the data that the fungus behaved differently in the presence of the ant brain it had co-evolved with,” said de Bekker, whose Penn State co-authors also included Andrew Patterson, assistant professor of molecular toxicology, and Phil Smith, director of the Metabolomics Core Facility.

The researchers found thousands of unique chemicals, most of them completely unknown. This, according to Hughes, is not surprising, since little previous work has mined these fungi for the chemicals they produce.

But what did stand out were two known neuromodulators, guanobutyric acid (GBA) and sphingosine. These both have been reported to be involved in neurological disorders and were enriched when the fungus was grown in the presence of brains of its target species.

“There is no single compound that is produced that results in the exquisite control of ant behavior we observe,” de Bekker said. “Rather, it is a mixture of different chemicals that we assume act in synergy.

“But whatever the precise blend and tempo of chemical secretion,” she said, “it is impressive that these fungi seem to ‘know’ when they are beside the brain of their regular host and behave accordingly.”

Noted Hughes, “This is one of the most complex examples of parasites controlling animal behavior because it is a microbe controlling an animal — the one without the brain controls the one with the brain. By employing metabolomics and controlled laboratory infections, we can now begin to understand how the fungi pull off this impressive trick.”

The research also is notable, the scientists contend, because it is the first extensive study of zombie ants in North America. Typically assumed to be a tropical phenomenon, they exist in temperate habitats but can be hard to find.

“This whole project has been made possible by Kim Fleming, a resident of Donalds, South Carolina, an avid nature photographer who found the original samples and posted pictures of them online,” said Hughes.

“It has been a joy to work with Kim, who has become an integral part of our team taking thousands of photos of the zombie ant fungi during her daily walk in the woods.”

He noted that the newly discovered species of zombie ant fungus will be named after Fleming, who is a co-author on the study.

“Through Kim, we have been able to engage with the wider community in South Carolina, including the biology program at Erskine College,” said de Bekker. “It’s been a great way to share our science with the public.”

The research, which was supported by Marie Curie Actions and Penn State, was published this month in BMC Evolutionary Biology.