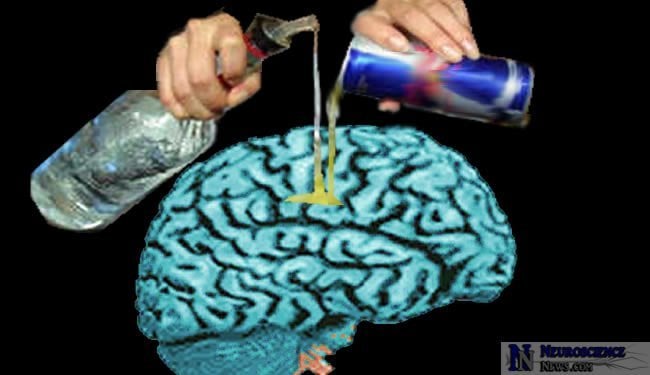 Alcohol on the brain.
Home
Featured

Energy drinks mixed with alcohol, such as Red Bull™ and vodka, have become trendy. While this consumption has been implicated in risky drinking practices and associated accidents and injuries, there is little laboratory research on how the effects of this combination differ from those of drinking alcohol alone. A recent laboratory study, comparing measures of intoxication due to alcohol alone versus alcohol/energy drink, has found that the combination of the energy drink enhanced feelings of stimulation in participants. However, the energy drink did not change the level of impairment for impulsive behavior. These findings suggest that energy drinks combined with alcohol may increase the risks associated with drinking.

Results will be published in the July 2011 issue of Alcoholism: Clinical & Experimental Research and are currently available at Early View.

“Young people are now drinking alcohol in different ways than they have in the past,” said Cecile A. Marczinski, assistant professor of psychology at Northern Kentucky University and first author of the study. “Classic mixed drinks such as rum and coke have been replaced with mixed drinks that use energy drinks instead, such as yagerbombs and Red Bull™ and vodka.”

“We have sales data showing that energy drinks have gained in popularity, and we know anecdotally that this practice is popular, but we have little data on objective and subjective responses that support growing concern about the safety of mixing energy drinks with alcohol,” said Amelia M. Arria, director of the Center on Young Adult Health and Development at the University of Maryland School of Public Health.

Marczinski concurred. “While consuming energy drinks with alcohol is thought of as a risky drinking practice, the laboratory evidence demonstrating this is quite limited,” she said. “In fact, most of the evidence that consuming alcohol/energy drinks is risky comes from epidemiological studies that have reported an increased risk of accidents and injuries associated with their use. However, those studies do not address the key confound that risky drinkers, who are prone to drinking heavily anyways, are just attracted to these drinks since they are trendy. Our study was designed to demonstrate that alcohol/energy drinks are pharmacologically distinct from alcohol alone and are adding to the risks of drinking.”

Marczinski and her colleagues randomly assigned 56 college student participants (28 men, 28 women), between the ages of 21 and 33, to one of four groups that received four different doses: 0.65 g/kg alcohol, 3.57 ml/kg energy drink, energy drink/alcohol, or a placebo beverage. The participants’ behavior was measured on a task that measures how quickly one can execute and suppress actions following the dose. Participants also rated how they felt, including feelings of stimulation, sedation, impairment, and levels of intoxication.

“We found that an energy drink alters the reaction to alcohol that a drinker experiences when compared to a drinker that consumed alcohol alone,” said Marczinski. “A consumer of alcohol, with or without the energy drink, acts impulsively compared to when they had not consumed alcohol. However, the consumer of the alcohol/energy drink felt more stimulated compared to an alcohol-alone consumer. Therefore, consumption of an energy drink combined with alcohol sets up a risky scenario for the drinker due to this enhanced feeling of stimulation and high impulsivity levels.”

“To reiterate,” said Arria, “the investigators found that the presence of an energy drink did not change the level of impairment associated with alcohol consumption.” It did, however, change the perception of impairment.

“The findings from this study provide concrete laboratory evidence that the mixture of energy drinks with alcohol is riskier than alcohol alone,” said Marczinski. “College students need to be aware of the risks of these beverages. Moreover, clinicians who are working with risky drinkers will need to try and steer their clients away from these beverages.”