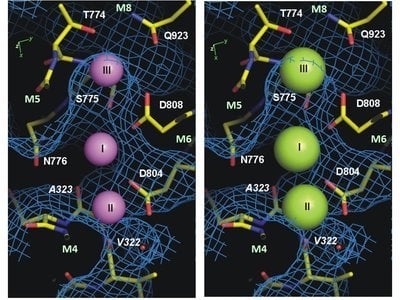 The figure shows the tunnel-like entry point to the binding sites of the sodium-potassium pump in the sodium-bound state. The three small sodium ions are bound inside the pump (violet spheres to the left), whereas there is not sufficient room for the larger potassium ions (green spheres to the right). The blue web shows the inner surface of the protein blocking the potassium ions. The letter code indicates the amino acids shown in the pump, which are essential to the binding process. Credited to Aarhus University.
Home
Electrophysiology

International Research Collaboration Reveals the Mechanism of the Sodium-Potassium Pump

Researchers from Aarhus University have collaborated with a Japanese group of researchers to establish the structure of a crucial enzyme – the so-called sodium-potassium pump – which forms part of every cell in the human body. The result, which was recently published in Nature, may pave the way for a better understanding of neurological diseases.

It’s not visible to the naked eye and you can’t feel it, but up to 40 per cent of your body’s energy goes into supplying the microscopic sodium-potassium pump with the energy it needs. The pump is constantly doing its job in every cell of all animals and humans. It works much like a small battery which, among other things, maintains the sodium balance which is crucial to keep muscles and nerves working.

The sodium-potassium pump transports sodium out and potassium into the cell in a fixed cycle. During this process the structure of the pump changes. It is well-established that the pump has a sodium and a potassium form. But the structural differences between the two forms have remained a mystery, and researchers have been unable to explain how the pump distinguishes sodium from potassium.

“The new protein structure shows how the smaller sodium ions are bound and subsequently transported out of the cell, whereas the access of the slightly larger potassium ions is blocked. We now understand how the pump distinguishes between sodium and potassium at the molecular level. This is a great leap forward for research into ion pumps and may help us understand and treat serious neurological conditions associated with mutations of the sodium-potassium pump, including a form of Parkinsonism and alternating hemiplegia of childhood in which sodium binding is defective,” explains Bente Vilsen, a professor at Aarhus University who spearheaded the project’s activities in Aarhus with Associate Professor Flemming Cornelius.

By precisely locating the sodium ions for the first time ever, and by demonstrating how the pump binds sodium, the new results – along with a recently published Science report on the structure of the sodium-potassium pump – demonstrate that Aarhus University is still at the forefront of this field of research.

The vital pump was discovered in 1957 by Professor Jens Christian Skou of Aarhus University, who received the Nobel Prize for his discovery in 1997. The new result is the culmination of five or six decades of research aimed at the mechanism behind this vital motor of the cells.

“Years ago, when the first electron microscopic images were taken in which the enzyme was but a millimetre-sized dot at 250,000 magnifications, I thought, how on earth will we ever be able to establish the structure of the enzyme. The pump transports potassium into and sodium out of the cells, so it must be capable of distinguishing between the two ions. But until now, it has been a mystery how this was possible,” says retired Professor Jens Christian Skou, who – even at 94 years of age – keeps up to date with new developments in the field of research which he initiated more than 50 years ago.

“Now, the researchers have described the structure that allows the enzyme to identify sodium and this may pave the way for a more detailed understanding of how the pump works. It is an impressive achievement and something I haven’t even dared dream of,” concludes Jens Christian Skou.