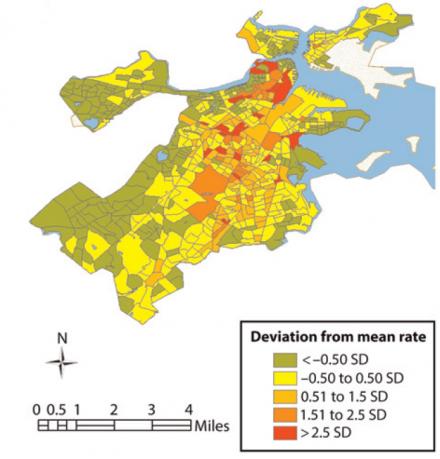 Could a Computer on the Police Beat Prevent Violence?

As cities across America work to reduce violence in tight budget times, new research shows how they might be able to target their efforts and police attention, with the help of high-powered computers and loads of data.

In a newly published paper, University of Michigan Medical School researchers and their colleagues have used real police data from Boston to demonstrate the promise of computer models in zeroing in on violent areas.

They combined and analyzed information in small geographic units, on police reports, drug offenses, and alcohol availability at stores, bars and restaurants, as well as the education levels, employment and other attributes of the people who live there.

The result: a detailed map of violent crime “hot spots”, and a better understanding of factors that create the right climate for violence. Both could help a city’s leaders and police focus resources on the areas where they can do the most good.

The findings, made using funding from the National Institutes of Health, are published online in the American Journal of Public Health.

With the growing availability of data from local, state and federal sources, the team says the approach could be applied to any city or metropolitan area. It can show which micro-environments, down to blocks and intersections; need most attention.

In fact, they are currently preparing the same analysis for the city of Flint, Mich., which unlike Boston has some of the nation’s highest violent crime rates. Victims of that violence often end up in a hospital emergency room staffed by U-M doctors.

“This approach allows us to find predictors of violence that aren’t just related to an individual’s predisposition; but rather, allow us to study people in places and a social environment,” says Robert Lipton, Ph.D., lead author and an associate professor of emergency medicine at the U-M Medical School.

Lipton, who describes himself as a geographical epidemiologist, and several of his co-authors are members of the U-M Injury Center, which has federal funding to study and test ways to reduce injuries of all kinds.

Researchers have studied the relationship between alcohol availability and violence for years. But the new paper adds several new facets: arrests for drug possession and dealing, and citizen calls to 911 about drug use, as well as the broader geographic factors surrounding each type of establishment where alcohol is sold.

Details from state liquor board licenses, police records and the U.S. Census Bureau all factored into the analysis. Over time, other types of data could be added, so that researchers and police can see the impact of any factor that might contribute to violent behavior.

The goal: to help policy makers and police identify areas that have higher rates of risk factors that may combine to produce violence.

The density of liquor stores or alcohol-serving bars and restaurants alone isn’t enough to explain violence patterns, the new paper shows that it’s much more complex than that.

“Why are two areas of a city, which seem to be the same across typical demographic factors, different in their level of violence? We need to become more nuanced in understanding these relationships,” says Lipton, who is also a member of the Prevention Research Center at the U-M School of Public Health.

The analysis of Boston data may help local authorities, while also helping the U-M researchers test their models and theories. Even with Boston’s relatively low violent crime rate, the researchers found they could show how place-based factors influence crime rates.

Results from the study indicate that types and densities of alcohol outlets were directly related to violent crimes despite the fact that alcohol outlets are typically viewed as locations in which other population or environmental factors, such as poverty or prostitution, relate to the violence.

The study also shows that drug possession, rather than drug distribution, has a positive relationship with violent crimes. Features of adjacent areas, and activities occurring there, were also found to be significantly related to violent crime in any given “target” area.