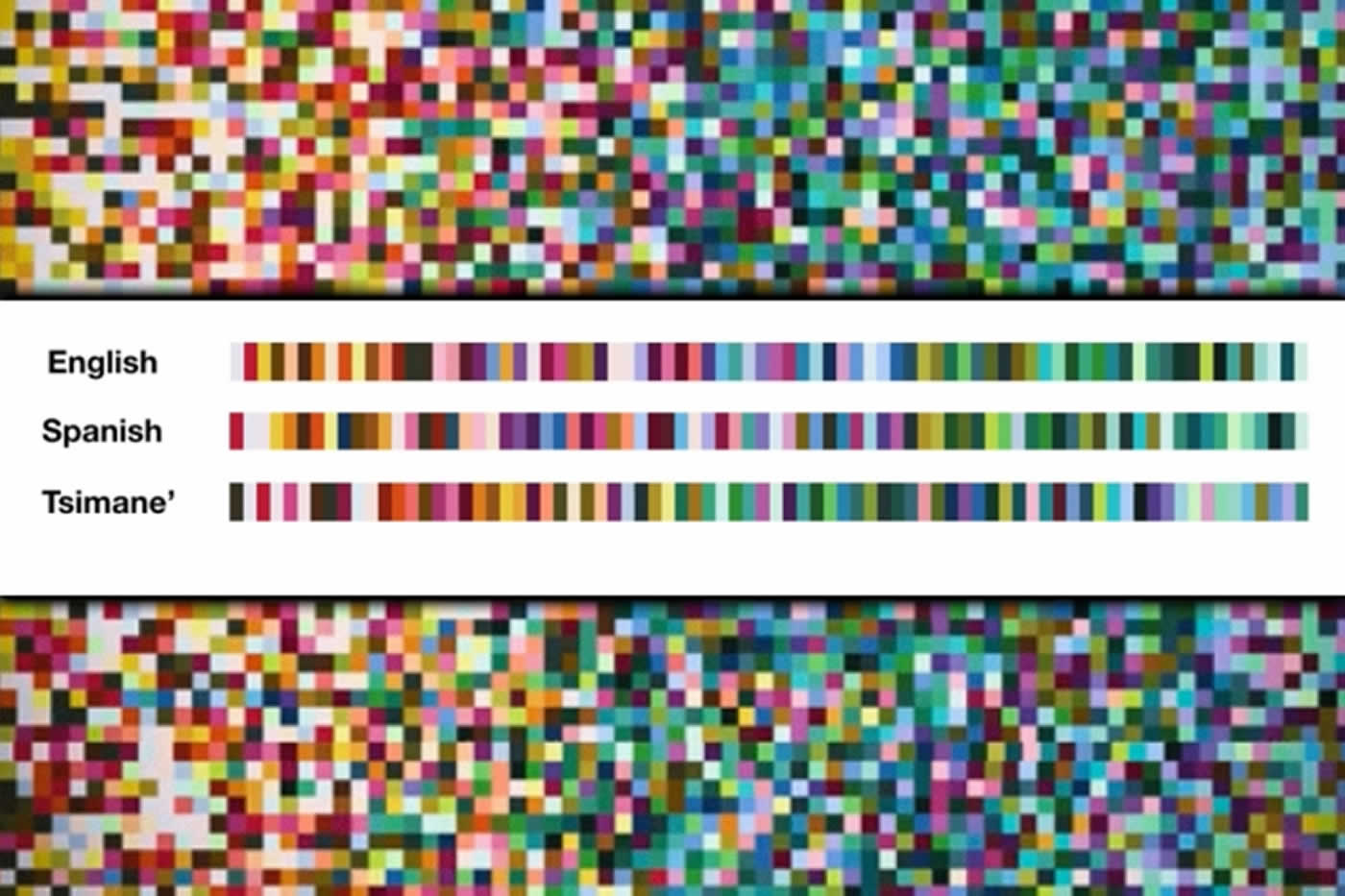 Analyzing the Language of Color

The human eye can perceive millions of different colors, but the number of categories human languages use to group those colors is much smaller. Some languages use as few as three color categories (words corresponding to black, white, and red), while the languages of industrialized cultures use up to 10 or 12 categories.

In a new study, MIT cognitive scientists have found that languages tend to divide the “warm” part of the color spectrum into more color words, such as orange, yellow, and red, compared to the “cooler” regions, which include blue and green.

This pattern, which they found across more than 100 languages, may reflect the fact that most objects that stand out in a scene are warm-colored, while cooler colors such as green and blue tend to be found in backgrounds, the researchers say.

This leads to more consistent labeling of warmer colors by different speakers of the same language, the researchers found.

“When we look at it, it turns out it’s the same across every language that we studied. Every language has this amazing similar ordering of colors, so that reds are more consistently communicated than greens or blues,” says Edward Gibson, an MIT professor of brain and cognitive sciences and the first author of the study, which appears in the Proceedings of the National Academy of Sciences the week of Sept. 18.

Gibson began this investigation of color after accidentally discovering during another study that there is a great deal of variation in the way colors are described by members of the Tsimane’, a tribe that lives in remote Amazonian regions of Bolivia. He found that most Tsimane’ consistently use words for white, black, and red, but there is less agreement among them when naming colors such as blue, green, and yellow.

Working with Conway, who was then an associate professor studying visual perception at Wellesley College, Gibson decided to delve further into this variability. The researchers asked about 40 Tsimane’ speakers to name 80 color chips, which were evenly distributed across the visible spectrum of color.

Once they had these data, the researchers applied an information theory technique that allowed them to calculate a feature they called “surprisal,” which is a measure of how consistently different people describe, for example, the same color chip with the same color word.

When a particular word (such as “blue” or “green”) is used to describe many color chips, then one of these chips has higher surprisal. Furthermore, chips that people tend to label consistently with just one word have a low surprisal rate, while chips that different people tend to label with different words have a higher surprisal rate. The researchers found that the color chips labeled in Tsimane’, English, and Spanish were all ordered such that cool-colored chips had higher average surprisals than warm-colored chips (reds, yellows, and oranges).

The researchers then compared their results to data from the World Color Survey, which performed essentially the same task for 110 languages around the world, all spoken by nonindustrialized societies. Across all of these languages, the researchers found the same pattern.

This reflects the fact that while the warm colors and cool colors occupy a similar amount of space in a chart of the 80 colors used in the test, most languages divide the warmer regions into more color words than the cooler regions. Therefore, there are many more color chips that most people would call “blue” than there are chips that people would define as “yellow” or “red.”

“What this means is that human languages divide that space in a skewed way,” Gibson says. “In all languages, people preferentially bring color words into the warmer parts of the space and they don’t bring them into the cooler colors.”

Colors in the forefront

To explore possible explanations for this trend, the researchers analyzed a database of 20,000 images collected and labeled by Microsoft, and they found that objects in the foreground of a scene are more likely to be a warm color, while cooler colors are more likely to be found in backgrounds.
“Warm colors are in the foreground, they’re all the stuff that we interact with and want to talk about,” Gibson says. “We need to be able to talk about things which are identical except for their color: objects.”

Gibson now hopes to study languages spoken by societies found in snowy or desert climates, where background colors are different, to see if their color naming system is different from what he found in this study.

Julie Sedivy, an adjunct associate professor of psychology at the University of Calgary, says the paper makes an important contribution to scientists’ ability to study questions such as how culture and language influence how people perceive the world.

“It’s a big step forward in establishing a more rigorous approach to asking really important questions that in the past have been addressed in a scientifically flimsy way,” says Sedivy, who was not part of the research team. She added that this approach could also be used to study other attributes that are represented by varying numbers of words in different languages, such as odors, tastes, and emotions.

What determines how languages categorize colors? We analyzed results of the World Color Survey (WCS) of 110 languages to show that despite gross differences across languages, communication of chromatic chips is always better for warm colors (yellows/reds) than cool colors (blues/greens). We present an analysis of color statistics in a large databank of natural images curated by human observers for salient objects and show that objects tend to have warm rather than cool colors. These results suggest that the cross-linguistic similarity in color-naming efficiency reflects colors of universal usefulness and provide an account of a principle (color use) that governs how color categories come about. We show that potential methodological issues with the WCS do not corrupt information-theoretic analyses, by collecting original data using two extreme versions of the color-naming task, in three groups: the Tsimane’, a remote Amazonian hunter-gatherer isolate; Bolivian-Spanish speakers; and English speakers. These data also enabled us to test another prediction of the color-usefulness hypothesis: that differences in color categorization between languages are caused by differences in overall usefulness of color to a culture. In support, we found that color naming among Tsimane’ had relatively low communicative efficiency, and the Tsimane’ were less likely to use color terms when describing familiar objects. Color-naming among Tsimane’ was boosted when naming artificially colored objects compared with natural objects, suggesting that industrialization promotes color usefulness.