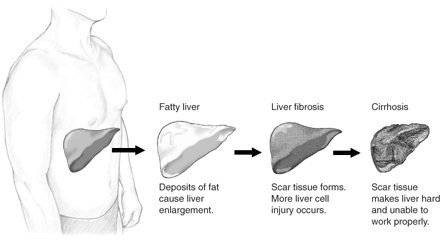 Researchers discovered a combination of circadian rhythm disruption and alcohol is a destructive double hit which can lead to alcoholic liver disease. This illustration shows the different stages of liver damage.
Home
Featured

Thirty percent of severe alcoholics develop liver disease, but scientists have not been able to explain why only a subset is at risk. A research team from Northwestern University and Rush University Medical Center now has a possible explanation: disrupted sleep and circadian rhythms can push those vulnerable over the edge to disease.

The team studied mice that essentially were experiencing what shift workers or people with jet lag suffer: their internal clocks were out of sync with the natural light-dark cycle. Another group of mice had circadian disruption due to a faulty gene. Both groups were fed a diet without alcohol and next with alcohol, and the team then examined the physiological effects.

The researchers found the combination of circadian rhythm disruption and alcohol is a destructive double hit that can lead to alcoholic liver disease.

The study was published last month by the journal PLOS ONE.

“Circadian disruption appears to be a previously unrecognized risk factor underlying the susceptibility to or development of alcoholic liver disease,” said Fred W. Turek, the Charles E. and Emma H. Morrison Professor of Biology at Northwestern’s Weinberg College of Arts and Sciences and one of the senior authors of the paper.

“What we and many other investigators are doing is bringing time to medicine for the diagnosis and treatment of disease,” Turek said. “We call it circadian medicine, and it will be transformative. Medicine will change a great deal, similar to the way physics changed when Einstein brought time to physics.”

A number of years ago, Ali Keshavarzian, M.D., a gastroenterologist at Rush University Medical Center who has worked with and studied patients with gastrointestinal and liver diseases, had a hunch disrupted circadian rhythms could be a contributing factor to the disease.

Keshavarzian had noticed that some patients with inflammatory bowel disease (inflammation in the intestine and/or colon) had flare-ups of symptoms when working nights, but they could control the disease when working the day shift. He sought out Turek, director of Northwestern’s Center for Sleep and Circadian Biology, to help investigate the relationship between circadian rhythms and the disease.

The two investigators and their groups first studied the effect of circadian rhythm disruption in an animal model of colitis and noted that disruption of sleep and circadian rhythms (caused by modeling shift work and chronic jet lag in the animals) caused more severe colitis in mice.

Keshavarzian has been studying the effect of “gut leakiness” (the intestinal lining becomes weak and causes dangerous endotoxins to get into the blood stream) to bacterial products in gastrointestinal diseases for two decades. Because the mouse model of colitis is associated with leaky gut, he proposed that disruption of circadian rhythms from shift work could make the intestine more susceptible to leakiness. He wanted to test its effect in an animal model of alcoholic liver disease — where a subset of alcoholics develop gut leakiness and liver disease — in order to find out whether shift work is the susceptibility factor that promotes liver injury.

“Non-pathogen-mediated chronic inflammation is a major cause of many chronic diseases common in Western societies and developing countries that have adopted a Western lifestyle,” said Keshavarzian, one of the senior authors of the paper. He is director of the Division of Digestive Diseases and the Josephine M. Dyrenforth Chair of Gastroenterology.

“Recent studies have shown that intestinal bacteria are the primary trigger for this inflammation, and gut leakiness is one of the major causes,” Keshavarzian said. “The factor leading to gut leakiness is not known, however. Our study suggests that disruption of circadian rhythms and sleep, which is part of life in industrial societies, can promote it and explain the susceptibility.”

Mice in both groups, prior to ingesting alcohol, showed an increase in gut leakiness.

Next, both groups of mice were fed alcohol. After only one week, animals in both groups showed a significant additional increase in gut leakiness, compared to control mice on an alcohol-free diet. At the end of the three-month study, mice in both groups were in the early stages of alcoholic liver disease.

“We have clearly shown that circadian rhythm disruption can trigger gut leakiness, which drives the more severe pathology in the liver,” said Keith Summa, a co-first author of the study and an M.D./Ph.D. candidate working in Turek’s lab.

“For humans, circadian rhythm disruption typically is environmental, not genetic, so individuals have some control over the behaviors that cause trouble, be it a poor sleep schedule, shift work or exposure to light at night,” he said.

Sleep and circadian rhythms are an integral part of biology and should be part of the discussion between medical doctors and their patients, the researchers believe.

“We want to personalize medicine from a time perspective,” Turek said. “Our bodies are organized temporally on a 24-hour basis, and this needs to be brought into the equation for understanding health and disease.”

Notes about this circadian rhythm and health research

The paper, titled “Disruption of the Circadian Clock in Mice Increases Intestinal Permeability and Promotes Alcohol-Induced Pathology and Inflammation,” is available online.

In addition to Turek, Keshavarzian and Summa, other authors of the paper are co-first author Robin M. Voigt, Christopher B. Forsyth, Maliha Shaikh and Yueming Tang, of Rush University Medical Center; Martha Hotz Vitaterna and Kate Cavanaugh, of Northwestern; and Shiwen Song, of the American Society for Clinical Pathology.