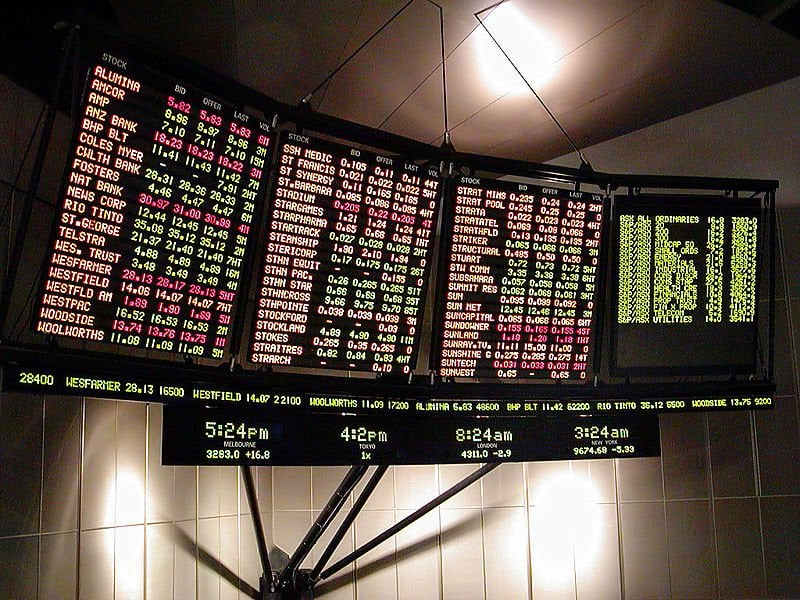 Researchers found that when participants noticed disparity between how much they perceived an asset to be worth and the rate of transactions for that asset, they began making poor business decisions and bubbles started to form in the market. This image shows an electronic stock market ticker.
Home
Featured

Financial Boom and Bust Drivers, All in the Mind?

Market bubbles that lead to financial crashes may be self-made because of instinctive biological mechanisms in traders’ brains that lead them to try and predict how others behave, according to a study part-funded by the Wellcome Trust.

The research offers the first insight into the processes in the brain that underpin financial decisions and behaviour leading to the formation of market bubbles. Publication of the study coincides with the five year anniversary of the infamous collapse of the Lehman Brothers investment bank in 2008.

A ‘bubble’ happens when active trading of a commodity or asset reaches prices that are considerably higher than its intrinsic value, usually followed by a market crash. The boom and bust of the US ‘dot com’ sector and the crash in the UK housing market are recent examples that resulted in billions of pounds in financial losses. Although bubbles have been intensely investigated in economics, the reasons why they arise and crash are not well understood and we know little about the biology of financial decision behaviour.

Researchers at the California Institute of Technology investigated the problem by bringing together expertise in experimental finance and neuroscience to look at the brain activity and behaviour of student volunteers as they traded shares within a staged financial market.

The researchers used functional Magnetic Resonance Imaging (fMRI), a technique to measure the flow of blood in the brain as an indication of activity, to map participants’ brain activity as they traded within the experimental market. They found that the formation of bubbles was linked to increased activity in an area of the brain that processes value judgements. People who had greater brain activity in this area were more likely to ride the bubble and lose money by paying more for an asset than its fundamental worth.

In bubble markets, they also found a strong correlation between activity in the value processing part of the brain and another area that is responsible for computing social signals to infer the intentions of other people and predict their behaviour.

Dr Benedetto De Martino, a researcher at Royal Holloway University of London who led the study while at the California Institute of Technology, said: “We find that in a bubble situation, people start to see the market as a strategic opponent and shift the brain processes they’re using to make financial decisions. They start trying to imagine how the other traders will behave and this leads them to modify their judgment of how valuable the asset is. They become less driven by explicit information, like actual prices, and more focused on how they imagine the market will change.

“These brain processes have evolved to help us get along better in social situations and are usually advantageous. But we’ve shown that when we use them within a complex modern system, like financial markets, they can result in unproductive behaviours that drive a cycle of boom and bust.”

The team found that when participants noticed disparity between how much they perceived an asset to be worth and the rate of transactions for that asset, they began making poor business decisions and bubbles started to form in the market.

Professor Peter Bossaerts from the University of Utah, a co-author of the study, explains: “It’s group illusion. When participants see inconsistency in the rate of transactions, they think that there are people who know better operating in the marketplace and they make a game out of it. In reality, however, there is nothing to be gained because nobody knows better.”

In the Wake of a Wildfire, Embers of Change in Cognition and Brain Function Linger

Colin Camerer, Robert Kirby Professor of Behavioral Economics at the California Institute of Technology, said: “There’s a mathematical measure of when the flow of traders’ orders to buy or sell changes from steady to choppy. A choppy flow is a clue that trades are bunching up around new information or pausing to see what happens next. This way of measuring has been sitting on the shelf for years. This is the first study to show that it seems to correspond to what the brain is computing.”

The findings give the first glimpse to the decision-making mechanisms in the brain that drive financial markets. Although they may not help to predict the onset of a bubble, the research could help to design better social and financial interventions to avoid the formation of future bubbles in financial markets.

Notes about this neuropsychology and neuroscience business news

The study, funded by the Wellcome Trust, the Betty and Gordon Moore Foundation and the Lipper Family Foundation, was published online today in the journal Neuron.