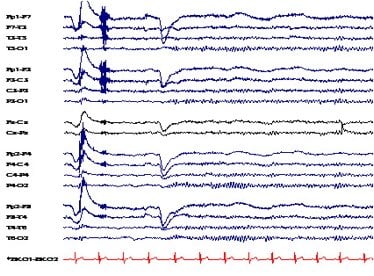 During neurofeedback, users learn to control their own brain activity with the help of a brain-computer interface. In the simplest case, this consists of a computer that records brainwaves through surface sensors on the scalp, known as an EEG (electroencephalogram). Image from NYU Langone Medical Center.
Home
Featured

A breakthrough study conducted in Canada has found that training of the well-known brainwave in humans, the alpha rhythm, enhances a brain network responsible for cognitive-control which correlates with reductions in mind-wandering. The training technique, termed neurofeedback, is being considered as a promising method for restoring brain function in mental disorders. Using several neuroimaging methods, a team of researchers working at the University of Western Ontario have now uncovered that functional changes within a key brain network occur directly after a 30-minute session of noninvasive, neural-based training. Dysfunction of this cognitive-control network has previously been implicated in a range of brain disorders including attentional deficit hyperactivity disorder, schizophrenia, depression and post-traumatic stress disorder.

During neurofeedback, users learn to control their own brain activity with the help of a brain-computer interface. In the simplest case, this consists of a computer that records brainwaves through surface sensors on the scalp, known as an EEG (electroencephalogram). The system is then able to process and simultaneously represent a user’s real-time brain activity, displayed from moment-to-moment during a training game on a computer. This setup is known as a neurofeedback loop, because information of brain activity is continually fed-back to a user reflecting their level of control. Such real-time feedback allows users to reproduce distinct brain states under physiologically-normal conditions, promising to be an innovative way to foster brain changes without adverse effects. This is possible because of neuroplasticity, a natural property of the brain that enables it to reorganize after continual training, resulting from adjustments to its own activity.

The new findings help to address a long-standing issue in the field: whether neurofeedback training can trigger any brain changes at all? “The effects we observed were durable enough to be detected with functional MRI up to 30 minutes after a session of neurofeedback” said Tomas Ros, PhD, lead author of the study, now at University of Geneva, “which allowed us to compare brain and behavioral measures more closely in time. We were excited to find that increased metabolic coupling within a key cognitive network was reflected in the individual level of brainwave change provoked by neurofeedback. The same measures were found to be tightly correlated with reductions in mind-wandering during an attention task. Amazingly, this would imply that the brain’s function may be entrained in a direction that is more attentive and quiet. In other words, our findings speak for the exquisite functional plasticity of the adult brain, whose past activity of little more than 30 minutes ago can condition its future state of processing. This has already been hinted at in meditation research, but we arrived at a direct and explicit demonstration by harnessing a brain-computer interface.”

Senior author and study director Prof. Ruth Lanius added: “Compared to the lack of significant findings in the control group that received training with false feedback, our findings are unambiguously supportive of a direct and plastic impact of neurofeedback on a central cognitive-control network, suggesting a promising basis for its use to treat disorders of cognition. We hope that our observations will stimulate more research by the science community in order to fully evaluate EEG neurofeedback as a viable and potentially revolutionary approach for the treatment of brain disorders. We are very excited by this promise and anticipate a host of new studies in this direction, particularly for cognitive disorders.  Our current work has now moved into the clinical domain to examine whether patients with post-traumatic stress disorder may benefit from this advance.”