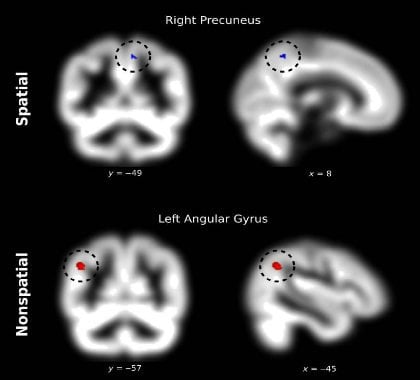 The structure of the brain shows the way in which we process numbers. People either do this spatially or non-spatially. A study by Florian Krause from the Donders Institute in Nijmegen shows for the first time that these individual differences have a structural basis in the brain.

People who process numbers spatially do this using an imaginary horizontal line along which the numbers are arranged from low to high, left to right. A non-spatial representation is also possible, by comparing numbers to other magnitudes such as force or luminosity.

Florian Krause identified this predisposition to spatial or non-spatial number processing in MRI scans of test subjects. He discovered differences in grey matter volume, which contains the cell bodies of nerve cells, in two specific locations. Spatially oriented brains have an above-average grey matter volume in the right precuneus, a small area of the brain associated with processing visual-spatial information. Non-spatially oriented brains have more grey matter in the left angular gyrus, an area associated with semantic and conceptual processing.

For a long time, scientists thought that everyone processed numbers predominantly in a spatial way. Krause demonstrates that this is not the case. In his own words: ‘Our current study stresses the importance of non-spatial number representations. This is important since researchers in the field tend to focus mainly on spatial representations. Personally, I think that numbers are understood in terms of our body experiences. We use information about size in real life to understand number size in our heads.’

The thirty people taking part in the study were put into an MRI scanner and were shown numbers between 1 and 9 (except 5). In two consecutive judgement tasks, they had to classify the presented digits as odd or even. Both tasks differed only in the required response: in the spatial task subjects had to click with their index finger or middle finger to classify the digits, and in the non-spatial task they applied either a small or a large force on a pressure sensor with their thumb. Both tests were carried out using the right hand. Importantly, participants coupled the spatial response as well as the force response to the size of the presented number, as they responded faster with a left or soft press for small numbers and with a right or hard press for large numbers. Krause worked out those couplings for each subject, and compared the scores with the information from their brain scan.

At present, maths is largely taught on the basis of a spatial number processing. ‘People with a non-spatial representation of numbers would probably benefit from a different approach to maths teaching’, says Krause. ‘It is possible to let pupils experience the size of numbers in a non-spatial way. This could involve expressing numbers with your body while doing simple arithmetics, for example.’ Krause is planning several new studies to explore the scientific basis of methods like these in more detail.