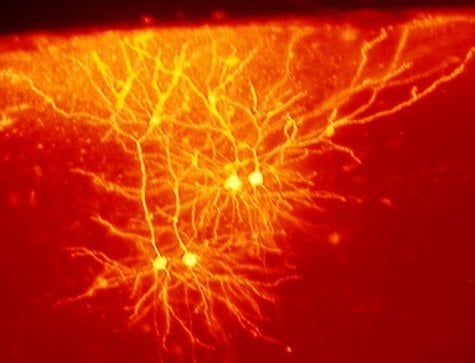 Neuroscience researchers have studied the organic protein complexes linking vesicles and membranes before fusion, in order to understand the rapidity of transmission.

Billions of brain cells are communicating at any given moment. Like an organic supercomputer they keep everything going, from breathing to solving riddles, and “programming errors” can lead to serious conditions such as schizophrenia, Parkinson’s Disease and Attention-Deficit Hyperactivity Disorder.

Nowadays the biochemical language of the nerve cells is the subject of intensive research right down at the molecular level, and for the first time researchers, some from the University of Copenhagen, have described just how nerve cells are capable of transmitting signals practically simultaneously.

The cells of the nervous system communicate using small molecule neurotransmitters such as dopamine, serotonin and noradrenalin. Dopamine is associated with cognitive functions such as memory, serotonin with mood control, and noradrenaline with attention and arousal.

The brain cell communication network, the synapses, transmit messages via chemical neurotransmitters packaged in small containers (vesicles) waiting at the nerve ends of the synapses. An electrical signal causes the containers and membrane to fuse and the neurotransmitters flow from the nerve ending to be captured by other nerve cells. This occurs with immense rapidity in a faction of a millisecond.

The vesicle uses three copies of the “linking bridge”

Researchers from the Universities of Copenhagen, Göttingen and Amsterdam have been studying the complex organic protein complexes that link vesicles and membrane prior to fusion, in order to find an explanation for the rapidity of these transmissions. They have discovered that the vesicle contains no fewer than three copies of the linking bridge or “SNARE complex”.

With only one SNARE complex the vesicle takes longer to fuse with the membrane and the neurotransmitter is therefore secreted more slowly.

The precursors for the SNARE complexes are present in the vesicles before they reach the target membrane”, Professor Jakob Balsev Sørensen from the Department of Neuroscience and Pharmacology at the University of Copenhagen. “Fast (synchronous) fusion is enabled when at least three of them work in tandem. If the vesicle only has one SNARE complex it can still fuse with the target membrane, but it takes much longer.”

The discovery has just been published in Science, the leading journal of scientific research and commentary.

Our next step will be to investigate the factors that influence and regulate the number of SNARE complexes in the vesicles. Is this a way for the nerve cells to choose to communicate more or less rapidly, and is this regulation altered when the brain is diseased?, professor Sørensen says.