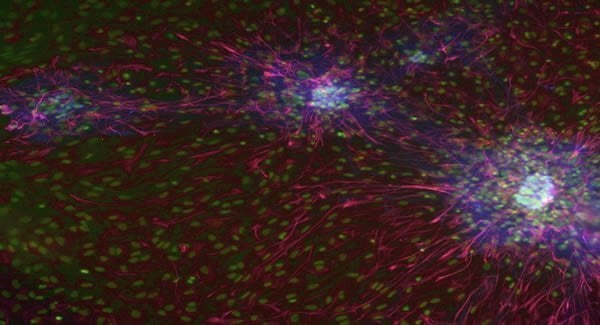 A York University study has shown for the first time how the drug misoprostol, which has been linked to neurodevelopmental defects associated with autism, interferes with neuronal cell function.

It is an important finding because misoprostol is similar in structure to naturally-occurring prostaglandins, which are the key signaling molecules produced by fatty acids in the brain.

Past clinical studies have shown an association between misoprostol and severe neurodevelopmental defects including autism symptoms. Those studies looked at cases in Brazil in which women misused the drug early in pregnancy in unsuccessful attempts to terminate their pregnancies.

The York study examined mouse neuronal cells to discover how the drug actually interferes at a molecular level with prostaglandins, which are important for development and communication of cells in the brain.

“Early in the first trimester of pregnancy, neuronal cells reach out to communicate with one another,” says Dorota Crawford, an assistant professor in the School of Kinesiology & Health Science in York’s Faculty of Health. “Our study shows that misoprostol interferes with this process by increasing the level of calcium ions in neuronal extensions, which reduces the number and length of these extensions. It prevents the cells from communicating with each other. If changes in prostaglandin level alter the development or differentiation of cells, it may have a physiological impact.”

Crawford and Javaneh Tamiji, who undertook the research for her master’s thesis in the Neuroscience Graduate Diploma Program at York, co-authored a study published online in the journal Biochemical and Biophysical Research Communications: “Prostaglandin E2 and misoprostol induce neurite retraction in Neuro-2a cells.”

There is no indication that women in Canada are misusing misoprostol to terminate pregnancies, and in fact the drug is used safely for other purposes such as treatment and prevention of gastrointestinal ulcers. However, during early neuronal development the drug misoprostol or other environmental factors such as infections or inflammations, which can also increase the level of prostaglandins, may interfere with normal brain function, says Crawford.

Crawford and Tamiji focused on the drug misoprostol because they had evidence from the clinical studies of the neurotoxic effects of the drug. They used misoprostol and the naturally occurring prostaglandins side by side in their study and found that both compounds produced the same effects on neuronal cell function.

The study shows that misoprostol interferes with the prostaglandin pathway in a dose-dependent manner – in other words, the higher the dose, the greater the problems created.

“What that indicates to us is whether it is infection that will activate it, or whether it is the drug, it will cause the same effect,” says Crawford.

Now that it has been shown that misoprostol affects interaction between cells, the next step will be to do animal studies on mice to examine the physiological impacts on particular parts of the brain, she says.

Crawford’s lab is one of very few in the world that has adopted a multidisciplinary approach to the study of autism spectrum disorders, using molecular techniques to understand the link between causative biological factors (genes and environment) and the behavioural expression.

York University is the leading interdisciplinary research and teaching university in Canada. York offers a modern, academic experience at the undergraduate and graduate level in Toronto, Canada’s most international city. The third largest university in the country, York is host to a dynamic academic community of 50,000 students and 7,000 faculty and staff, as well as 200,000 alumni worldwide. York’s 10 Faculties and 28 research centres conduct ambitious, groundbreaking research that is interdisciplinary, cutting across traditional academic boundaries. This distinctive and collaborative approach is preparing students for the future and bringing fresh insights and solutions to real-world challenges. York University is an autonomous, not-for-profit corporation.