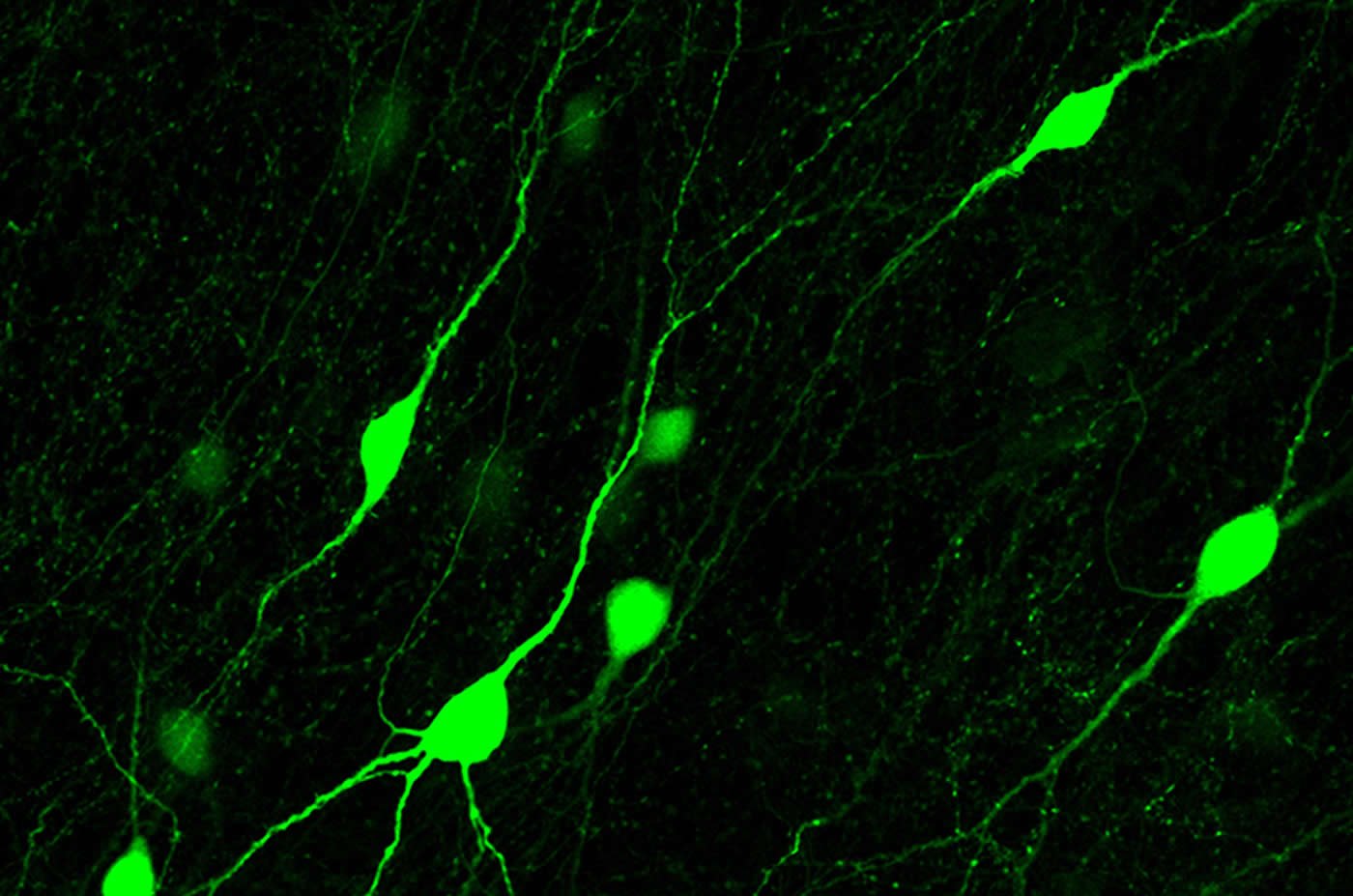 Possible link discovered between autism and formation of inhibitory synapses

Summary: Study finds a possible link between the formation of inhibitory synapses and autism.

Neurobiologists Cátia Frias and Corette Wierenga have studied the formation of inhibitory synapses, a complex process that occurs when the brain adapts. Their research uncovered an astonishing link to autism: one of the proteins involved, known as MET, is listed among so-called ‘risk factors for autism’, which means that errors in that protein are found in some people with autism. This shows that there may be ties between autism and the formation of inhibitory synapses. The results of the study were published in Journal of Neuroscience on 26 March.

“Our brain cells pass on information to one another via specialized connections we call synapses”, Wierenga explains. “The vast majority of them are ‘excitatory’, which means they increase the activity of the receiving neuron. But around 10-20% of them inhibit that activity. Scientists have only recently begun studying inhibitory synapses: until perhaps 10 years ago, they were considered not that interesting. But they actually turn out to be extremely important. Inhibitory synapses act like ‘directors’ that guide the brain’s excitatory synapses.” 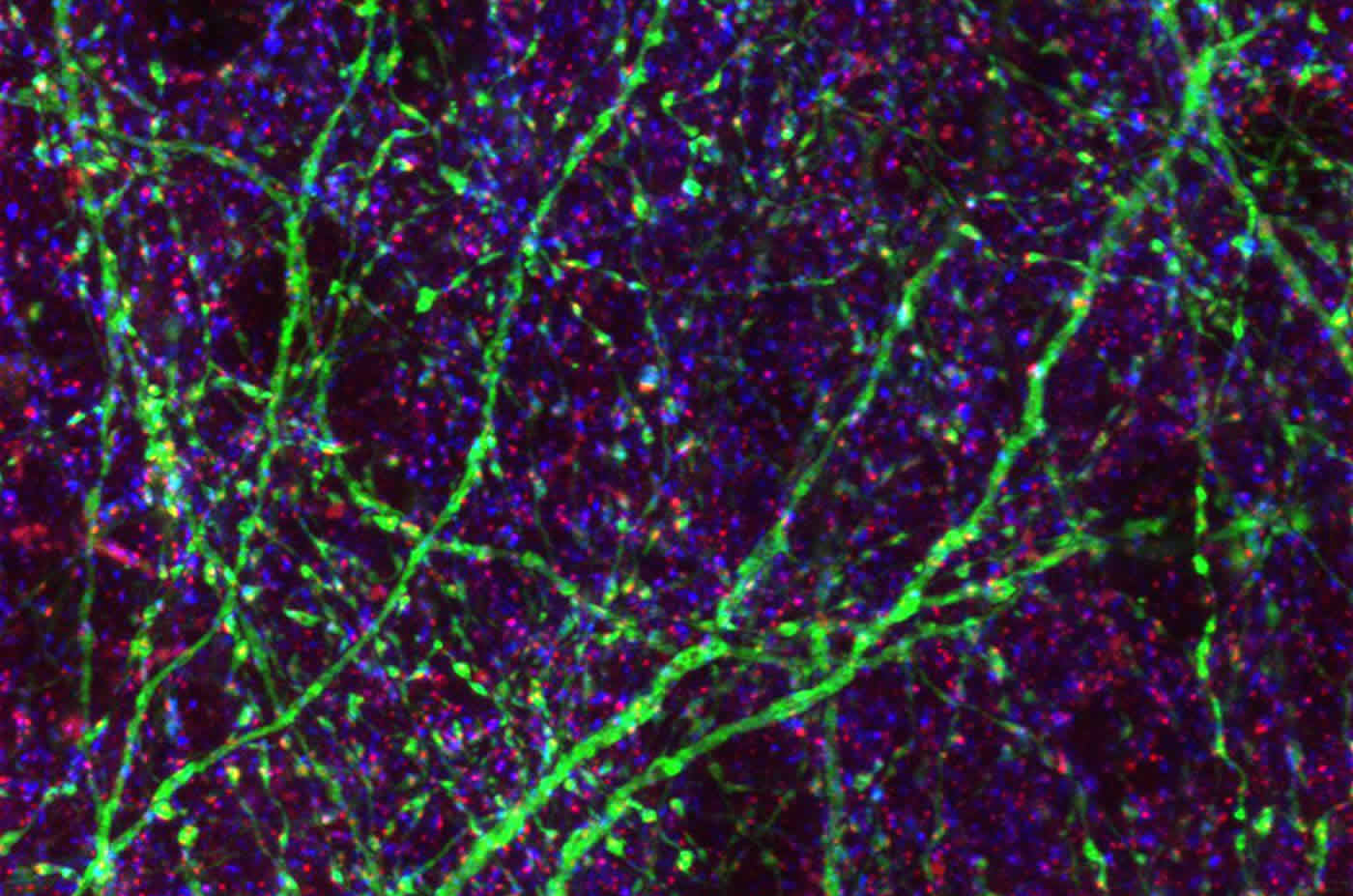 In this brain slice, a few brain cells are colored green. Blue/red dots indicate inhibitory synapses made onto green and uncolored brain cells. The image is credited to Frias et al.

SLICES OF MOUSE BRAIN
Synapses are constantly being formed and taken down, for example when we learn new things. Wierenga and her colleagues examined the formation of inhibitory synapses using a special microscope that allowed them to observe live neurons in slices of a mouse brain. The cells are made visible using fluorescent proteins (biological molecules) that turn them red or green. This two-photon microscope enabled the researchers to follow individual synapses and their changes.

A SNAPSHOT EVERY 10 MINUTES
By taking a ‘snapshot’ every 10 minutes for two hours, the researchers identified which synapses are stable and which ones are being formed or taken down. Wierenga: “We were able to determine that the formation of a new inhibitory synapse is not a simple on/off process, but rather a series of consecutive steps involving specific molecular events. We studied one specific route in detail and found a surprising link to autism in the process. In the future, we want to continue examining these molecular processes.”

Changes in inhibitory connections are essential for experience-dependent circuit adaptations. Defects in inhibitory synapses are linked to neurodevelopmental disorders, but the molecular processes underlying inhibitory synapse formation are not well understood. Here we use high resolution two-photon microscopy in organotypic hippocampal slices from GAD65-GFP mice of both sexes to examine the signaling pathways induced by the postsynaptic signaling molecule Semaphorin4D (Sema4D) during inhibitory synapse formation. By monitoring changes in individual GFP-labeled presynaptic boutons, we found that the primary action of Sema4D is to induce stabilization of presynaptic boutons within tens of minutes. Stabilized boutons rapidly recruited synaptic vesicles, followed by accumulation of postsynaptic gephyrin and were functional after 24 hours, as determined by electrophysiology and immunohistochemistry. Inhibitory boutons are only sensitive to Sema4D at a specific stage during synapse formation and sensitivity to Sema4D is regulated by network activity. We further examined the intracellular signaling cascade triggered by Sema4D and found that bouton stabilization occurs through rapid remodeling of the actin cytoskeleton. This could be mimicked by the actin-depolymerizing drug Latrunculin B or by reducing ROCK activity. We discovered that the intracellular signaling cascade requires activation of the receptor tyrosine kinase MET, which is a well-known autism risk factor. By using a viral approach to reduce MET levels specifically in inhibitory neurons, we found that their axons are no longer sensitive to Sema4D signaling. Together, our data yield important insights into the molecular pathway underlying activity-dependent Sema4D-induced synapse formation and reveal a novel role for presynaptic MET at inhibitory synapses.