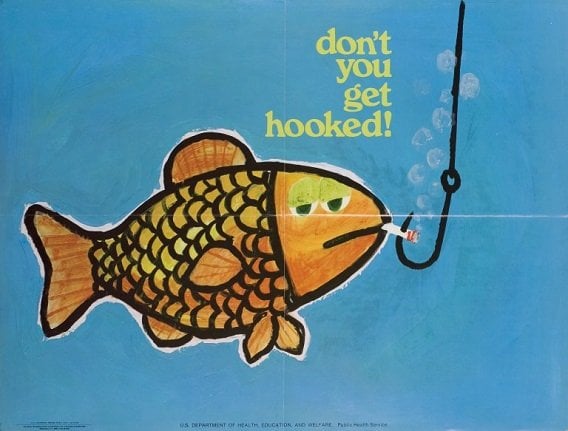 Researchers discovered a part of the brain involved in future behavioral changes, the dorsomedial prefrontal cortex, had greater activation when smokers were exposed to anti-smoking messages with stronger arguments as opposed to weaker arguments. The anti smoking campaign poster is credited to the US Department of Health, Education and Welfare.
Home
Featured

Researchers from the Perelman School of Medicine at the University of Pennsylvania have shown that an area of the brain that initiates behavioral changes had greater activation in smokers who watched anti-smoking ads with strong arguments versus those with weaker ones, and irrespective of flashy elements, like bright and rapidly changing scenes, loud sounds and unexpected scenario twists. Those smokers also had significantly less nicotine metabolites in their urine when tested a month after viewing those ads, the team reports in a new study published online in the Journal of Neuroscience.

This is the first time research has shown an association between cognition and brain activity in response to content and format in televised ads and behavior.

In a study of 71 non-treatment-seeking smokers recruited from the Philadelphia area, the team, led by Daniel D. Langleben, M.D., a psychiatrist in the Center for Studies of Addiction at Penn Medicine, identified key brain regions engaged in the processing of persuasive communications using fMRI, or functional magnetic resonance imaging. They found that a part of the brain involved in future behavioral changes—known as the dorsomedial prefrontal cortex (dMPFC)—had greater activation when smokers watched an anti-smoking ad with a strong argument versus a weak one.

Even ads riddled with attention-grabbing tactics, the research suggests, are not effective at reducing tobacco intake unless their arguments are strong. However, ads with flashy editing and strong arguments, for example, produced better recognition.

“We investigated the two major dimensions of any piece of media, content and format, which are both important here,” said Dr. Langleben, who is also an associate professor in the department of Psychiatry. “If you give someone an unconvincing ad, it doesn’t matter what format you do on top of that. You can make it sensational. But in terms of effectiveness, content is more important. You’re better off adding in more sophisticated editing and other special effects only if it is persuasive.”

The paper may enable improved methods of design and evaluation of public health advertising, according to the authors, including first author An-Li Wang, PhD, of the Annenberg Public Policy Center at the University of Pennsylvania. And it could ultimately influence how producers shape the way ads are constructed, and how ad production budgets are allocated, considering special effects are expensive endeavors versus hiring screenwriters.

A 2009 study by Dr. Langleben and colleagues that looked solely at format found people were more likely to remember low-key, anti-smoking messages versus attention-grabbing messages. This was the first research to show that low-key versus attention-grabbing ads stimulated different patterns of activity, particularly in the frontal cortex and temporal cortex. But it did not address content strength or behavioral changes.

This new study is the first longitudinal investigation of the cognitive, behavioral, and neurophysical response to the content and format of televised anti-smoking ads, according to the authors.

“This sets the stage for science-based evaluation and design of persuasive public health advertising,” said Dr. Langleben. “An ad is only as strong as its central argument, which matters more than its audiovisual presentation. Future work should consider supplementing focus groups with more technology-heavy assessments, such as brain responses to these ads, in advance of even putting the ad together in its entirety.”

Maladaptive Daydreaming May Be a Better Diagnosis for Some Than ADHD

Notes about this smoking and neuroscience research

This study was funded by the National Institute on Drug Abuse (R21 DA024419).