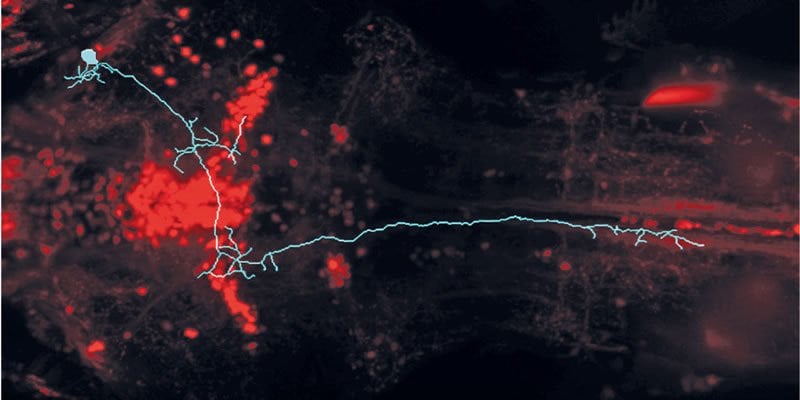 When a zebrafish larva sees a prey object, this information is sent to neurons in the AF7 region of the brain. These neurons (one of which is shown here in blue) then send the hunting impulse to the areas that control movement. Credit MPI of Neurobiology/ Semmelhack.

Which Dot Will They Hunt?

Prey is recognised even by the zebrafish retina.

Seeing – recognising – acting. These three words describe how a sensory input can lead to a targeted movement. However, very little is known about how and where the brain converts external inputs into behavioural responses. Now, scientists at the Max Planck Institute of Neurobiology in Martinsried have been able to shed light on important neural circuitry involved in the prey capture behaviour exhibited by young zebrafish. The findings show that neurons in the retina of the eye already filter out prey objects from other environmental signals. The cells then forward this information to an area of the brain, which, up to now, had no identifiable role. The corresponding swimming movements are then initiated here.

It’s not easy to catch a ball. The ball must first be recognised and tracked by the eyes. At the same time, the body’s own movements must be coordinated in such a way that the hands hang on to the ball at the right time and in the right place. For animals, such coordination of visual inputs and their own movements is critical to their survival: it is only in this way that they can recognise, track and catch prey. For many animals, fundamental prey capture behaviour is therefore innate. Up until now, scientists could not explain how and where the brain recognises and classifies an object and initiates the corresponding movement pattern.

Prey causes the fish brain to light up

As soon as they are hatched, zebrafish larvae can already hunt single-celled organisms such as paramecia. The brain of the tiny fish is able to recognise the single-celled organism as a target, calculate its location and steer its body towards the prey using characteristic tail movements. This innate prey capture behaviour can also be triggered in the laboratory using small, moving dots. Scientists can thus present potential “prey” on a miniature screen and study the subsequent processes in the fish brain – as zebrafish larvae are almost transparent. As a result of genetic modifications, the neurons in the fish brain that are active at a given moment light up in the transparent brain. Processes in the fish brain can therefore be observed using a microscope while the animals recognise and classify their prey and swim towards them.

To understand the neural circuits of the prey capture behaviour, the neurobiologists initially concentrated on the recognition of prey objects. “First of all, we looked at the connections between the retina and the brain,” says Julia Semmelhack, describing her work. Neurons in the zebrafish retina project into 10 areas in the brain known as AF regions; however, very little is known about the role of these regions. The scientists in Martinsried were able to show that the neurons in one of these 10 AF regions always became active when the dots shown fitted the brain’s template of an optimal prey object. Larger or smaller dots had no effect. The AF7 brain region lit up only in the presence of virtual dots that were the “right” size (and in the case of actual paramecia).

A brain region reveals itself

Further investigation showed that the neurons in the retina filter out potential prey objects from the environment. The information is only sent to the AF7 region if a dot is the “right” one. From there, the hunting impulse is then sent to other visual regions and to the areas controlling movement. When the scientists cut the AF7 connections, the fish responded only to a very limited extent to the dots representing the prey.

The AF7 region is therefore essential for classifying visual stimuli as prey and for triggering the associated hunting behaviour. “We have shown how a visual signal from the retina, travelling via the AF7 region, leads to certain behaviour,” says a delighted Herwig Baier, who, together with his department at the Max Planck Institute of Neurobiology, is studying how sensory inputs from the brain are converted into behavioural responses. A major first step has been taken. The neurobiologists now want to find out how the information in the AF7 region is translated into the various swimming movements.

About this neurobiology research

A dedicated visual pathway for prey detection in larval zebrafish

Zebrafish larvae show characteristic prey capture behavior in response to small moving objects. The neural mechanism used to recognize objects as prey remains largely unknown. We devised a machine learning behavior classification system to quantify hunting kinematics in semi-restrained animals exposed to a range of virtual stimuli. Two-photon calcium imaging revealed a small visual area, AF7, which was activated specifically by the optimal prey stimulus. This pretectal region is innervated by two types of retinal ganglion cells, which also send collaterals to the optic tectum. Laser ablation of AF7 markedly reduced prey capture behavior. We identified neurons with arbors in AF7 and found that they projected to multiple sensory and premotor areas: the optic tectum, the nucleus of the medial longitudinal fasciculus (nMLF) and the hindbrain. These findings indicate that computations in the retina give rise to a visual stream which transforms sensory information into a directed prey capture response.

Exercise May Reduce Brain Inflammation, Reducing the Risk of Alzheimer’s