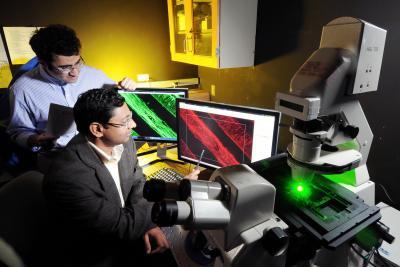 Research seeks the ‘master knob’ to turn on nerve repair.

Modulating immune response to injury could accelerate the regeneration of severed peripheral nerves, a new study in an animal model has found. By altering activity of the macrophage cells that respond to injuries, researchers dramatically increased the rate at which nerve processes regrew.

Influencing the macrophages immediately after injury may affect the whole cascade of biochemical events that occurs after nerve damage, potentially eliminating the need to directly stimulate the growth of axons using nerve growth factors. If the results of this first-ever study can be applied to humans, they could one day lead to a new strategy for treating peripheral nerve injuries that typically result from trauma, surgical resection of tumors or radical prostectomy.

“Both scar formation and healing are the end results of two different cascades of biological processes that result from injuries,” said Ravi Bellamkonda, Carol Ann and David D. Flanagan professor in the Wallace H. Coulter Department of Biomedical Engineering and member of the Regenerative Engineering and Medicine Center at Georgia Tech and Emory University. “In this study, we show that by manipulating the immune system soon after injury, we can bias the system toward healing, and stimulate the natural repair mechanisms of the body.”

Beyond nerves, researchers believe their technique could also be applied to help regenerate other tissue – such as bone. The research was supported by the National Institutes of Health (NIH), and reported online Sept. 26, 2012, by the journal Biomaterials.

After injury, macrophages that congregate at the site of the injury operate like the conductor of an orchestra, controlling processes that remove damaged tissue, set the stage for repair and encourage the replacement of cells and matrix materials, said Nassir Mokarram, a Ph.D. student in the Coulter Department of Biomedical Engineering and Georgia Tech’s School of Materials Science and Engineering. Converting the macrophages to a “pro-healing” phenotype that secretes healing compounds signals a broad range of other processes – the “players” in the symphony analogy.

“If you really want to change the symphony’s activity from generating scarring to regeneration of tissue, you need to target the conductor, not just a few of the players, and we think macrophages are capable of being conductors of the healing symphony,” said Mokarram.

Macrophages are best known for their role in creating inflammation at the site of injuries. The macrophages and other immune system components battle infection, remove dead tissue – and often create scarring that prevents nerve regeneration. However, these macrophages can exist in several different phenotypes depending on the signals they receive. Among the macrophage phenotypes are two classes – M2a and M2c – that encourage healing.

Bellamkonda’s research team used an interleukin 4 (IL-4) cytokine to convert macrophages within the animal model to the “pro-healing” phenotypes. They placed a gel that released IL-4 into hollow polymeric nerve guides that connected the ends of severed animal sciatic nerves that had to grow across a 15 millimeter gap to regenerate. The IL-4 remained in the nerve guides for 24 hours or less, and had no direct influence on the growth of nerve tissue in this short period of time.

Three weeks after the injury, the nerve guides that released IL-4 were almost completely filled with re-grown axons. The treated nerve guides had approximately 20 times more nerve regeneration than the control channels, which had no IL-4-treated macrophages.

Research is now underway to develop the technique for determining how soon after injury the macrophages should be treated, and what concentration of IL-4 would be most effective.

“We believe immune cells are the ‘master knobs’ that modulate the biochemical cascade downstream,” Mokarram said. “They are among the ‘first-responders’ to injury, and are involved for almost the whole regeneration process, secreting several factors that affect other cells. With IL-4, we are doing something very early in the process that is triggering a cascade of events whose effects last longer.”

Tissue engineering approaches have focused on encouraging the growth of nerve cells, using special scaffolds and continuous application of nerve growth factors over a period of weeks. Instead, the Bellamkonda group believes that influencing the immune system soon after injury could provide a simpler and more effective treatment able to restore nerve function.

“The significance of this finding is that IL-4 and other factors may be used to make sure the regenerative bias is high so that nerves, and perhaps other tissues, can regenerate on their own after injury,” Bellamkonda said.

Notes about this regenerative medicine research