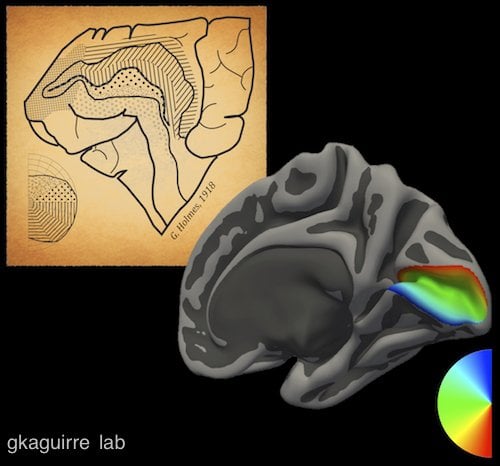 The modern map of the representation of vision in the brain is compared to the 1918 original. Image from Aguirre lab.
Home
Featured

Researchers Create a Universal Map of Vision in the Human Brain

Nearly 100 years after a British neurologist first mapped the blind spots caused by missile wounds to the brains of soldiers, Perelman School of Medicine researchers at the University of Pennsylvania have perfected his map using modern-day technology. Their results create a map of vision in the brain based upon an individual’s brain structure, even for people who cannot see. Their result can, among other things, guide efforts to restore vision using a neural prosthesis that stimulates the surface of the brain. The study appears in the latest issue of Current Biology, a Cell Press journal.

Scientists frequently use a brain imaging technique called functional MRI (fMRI) to measure the seemingly unique activation map of vision on an individual’s brain. This fMRI test requires staring at a flashing screen for many minutes while brain activity is measured, which is an impossibility for people blinded by eye disease. The Penn team has solved this problem by finding a common mathematical description across people of the relationship between visual function and brain anatomy.

“By measuring brain anatomy and applying an algorithm, we can now accurately predict how the visual world for an individual should be arranged on the surface of the brain,” said senior author Geoffrey Aguirre, MD, PhD, assistant professor of Neurology. “We are already using this advance to study how vision loss changes the organization of the brain.”

The researchers combined traditional fMRI measures of brain activity from 25 people with normal vision. They then identified a precise statistical relationship between the structure of the folds of the brain and the representation of the visual world.

“At first, it seems like the visual area of the brain has a different shape and size in every person,” said co-lead author Noah Benson, PhD, post-doctoral researcher in Psychology and Neurology. “Building upon prior studies of regularities in brain anatomy, we found that these individual differences go away when examined with our mathematical template.”

A World War I neurologist, Gordon Holmes, is generally credited with creating the first schematic of this relationship. “He produced a remarkably accurate map in 1918 with only the crudest of techniques,” said co-lead author Omar Butt, MD/PhD candidate in the Perelman School of Medicine at Penn. “We have now locked down the details, but it’s taken 100 years and a lot of technology to get it right.”

Notes about this visual neuroscience research