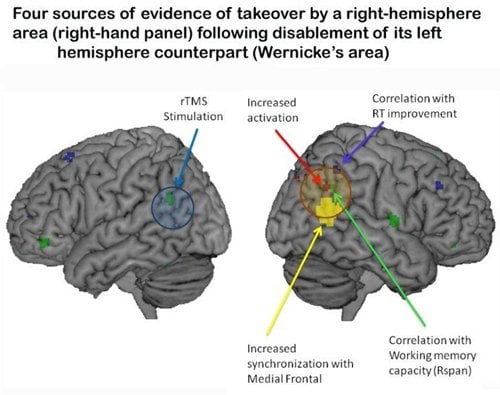 This image shows four sources of evidence of takeover by a right-hemisphere area following the disablement of its left hemisphere counterpart. Image redited to Carnegie Mellon University.
Home
Featured

Research Reveals How the Human Brain Adapts to Injury

For the first time, scientists at Carnegie Mellon University’s Center for Cognitive Brain Imaging (CCBI) have used a new combination of neural imaging methods to discover how the human brain adapts to injury. The research, published in Cerebral Cortex, shows that when one brain area loses functionality, a “back-up” team of secondary brain areas immediately activates, replacing not only the unavailable area but also its confederates.

“The human brain has a remarkable ability to adapt to various types of trauma, such as traumatic brain injury and stroke, making it possible for people to continue functioning after key brain areas have been damaged,” said Marcel Just, the D. O. Hebb Professor of Psychology at CMU and CCBI director. “It is now clear how the brain can naturally rebound from injuries and gives us indications of how individuals can train their brains to be prepared for easier recovery. The secret is to develop alternative thinking styles, the way a switch-hitter develops alternative batting styles. Then, if a muscle in one arm is injured, they can use the batting style that relies more on the uninjured arm.”

For the study, Just, Robert Mason, senior research psychologist at CMU, and Chantel Prat, assistant professor of psychology at the University of Washington, used functional magnetic resonance imaging (fMRI) to study precisely how the brains of 16 healthy adults adapted to the temporary incapacitation of Wernicke’s area, the brain’s key region involved in language comprehension. They applied Transcranial Magnetic Stimulation (TMS) in the middle of the fMRI scan to temporarily disable Wernicke’s area in the participants’ brains. The participants, while in the MRI scanner, were performing a sentence comprehension task before, during and after the TMS was applied. Normally, Wernicke’s area is a major player in sentence comprehension.

The research team used the fMRI scans to measure how the brain activity changed immediately following stimulation to Wernicke’s area. The results showed that as the brain function in Wernicke’s area decreased following the application of TMS, a “back-up” team of secondary brain areas immediately became activated and coordinated, allowing the individual’s thought process to continue with no decrease in comprehension performance.

The brain’s back-up team consisted of three types of brain regions: (1) contralateral areas — areas that are in the mirror-image location of the brain; (2) areas that are right next to the impaired area; and (3) a frontal executive area.

“The first two types of back-up areas have similar brain capabilities as the impaired Wernicke area, although they are less efficient at the capability,” Just said. “The third area plays a strategic role as in responding to the initial impairment and recruiting back-up areas with similar capabilities.”

Additionally, the research showed that impairing Wernicke’s area also negatively affected the cortical partners with which Wernicke’s area had been working. “Thinking is a network function,” Just explained. “When a key node of a network is impaired, the network that is closely collaborating with the impaired node is also impaired. People do their thinking with groups of brain areas, not with single brain areas.”

Mason, the study’s lead author, noted that following the TMS, the impaired area and its partners gradually returned to their previous levels of coordinated activity, while the back-up team of brain areas was still in place. “This means, that for some period of time, there were two cortical teams operating simultaneously, explaining why performance is sometimes improved by TMS,” he said.

How Do SSRIs Like Prozac, Lexapro Really Work? Ask a Fruit Fly

This research builds on Just’s previous research on brain resilience after stroke and brain training to remediate dyslexia.  The studies are motivated by a computational theory, called 4CAPS, that provides an account of how autonomous brain systems dynamically self-organize themselves in response to changing circumstances, which the researchers believe to be the basis of fluid intelligence.

Just, who uses brain imaging to understand how brain processes underpin various types of human thought, has helped to establish Carnegie Mellon as a world leader in brain sciences. The university recently launched a Brain, Mind and Learning initiative to build from its  research excellence in psychology, computer science and computation to continue to solve real-world problems.