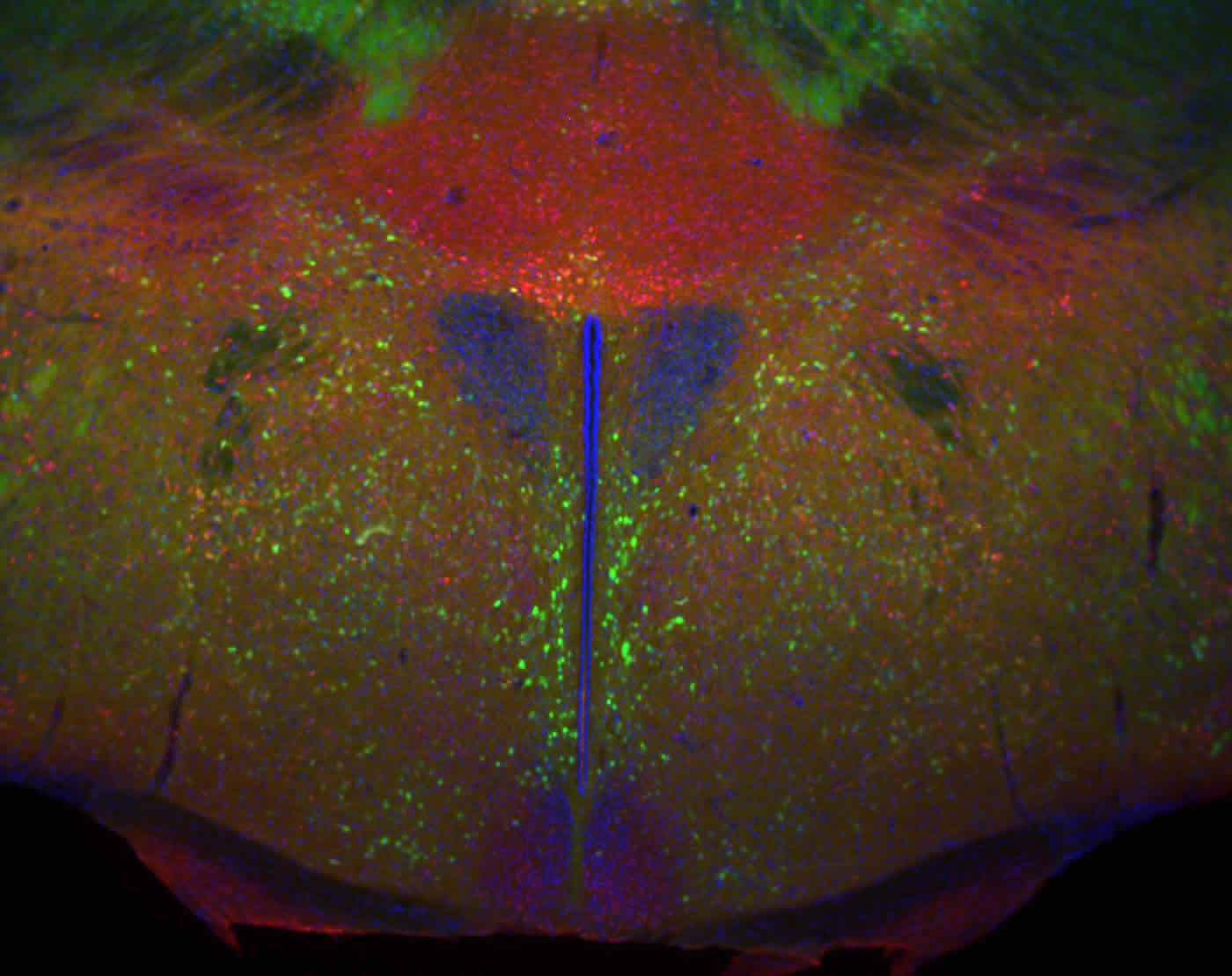 The structure is anatomically known as the ventrolateral part of the ventromedial hypothalamus, or VMHvl, because of its central location inside the brain on the underside of the hypothalamus. Image is for illustrative purposes only. Credit: NIH.

Mapping the Roots of Premeditated Violent Intent in the Brain

The bad intentions that often precede violence originate in a specific brain region, according to a study in mice led by researchers from NYU Langone Medical Center and published in Nature Neuroscience online March 7.

The work is the first, say the study authors, to tie warning signs of premeditated violence — stalking, bullying, and possibly sexual aggression — to a distinct part of the hypothalamus, the brain region that also controls body temperature, hunger and sleep in mammals. The structure is anatomically known as the ventrolateral part of the ventromedial hypothalamus, or VMHvl, because of its central location inside the brain on the underside of the hypothalamus.

“Our study pinpoints the brain circuits essential to the aggressive motivations that build up as animals prepare to attack,” says study senior investigator Dayu Lin, PhD, an assistant professor at the Neuroscience Institute at NYU Langone.

The new study builds on Lin’s ongoing research effort to better understand aggressive motivation, along with related brain biomarkers and biochemical pathways. Its clinical implications are potentially widespread: If the field can learn how to control aggressive motivation, it could lead to better control of these behaviors without the need for sedation. Lin also last month published the results of a mouse study on the origins of rage in the journal Current Biology.

Despite these results in mice, which share many brain structures with humans, targeting this part of the human brain with treatments meant to curb aggression remains “only a distant possibility, even if related ethical and legal issues could be resolved,” says Lin. “That said, our results argue that the ventrolateral part of the ventromedial hypothalamus should be studied further as part of future efforts seeking to correct behaviors from bullying to sexual predation.”

For the current study, male mice trained to attack weaker male mice were monitored to see how aggressively they tried to gain access to and bully another mouse. One measure was the number of attempts made by aggressive mice to poke their noses through holes that led to another mouse entering their space, and which they could then attack.

While past studies by the team had linked aggressive actions to this part of the brain, the current study specifically tracked the premeditated, motivational aspect of the behavior to the VMHvl.

By using sets of probes that measured nerve activity before, during, and after mice planned to attack, the research team found that nerve cell activity in the VMHvl routinely peaked just before mice began to hole poke, even when the aggressive mice could not yet smell or see their target.

Nerve cell activity in the VMHvl also increased by as much as tenfold during the initial seconds after the weaker target mice appeared. Genetically stopping VMHvl activity ceased nearly all aggressive motivations in mice, says Lin, but did not inhibit other learned behaviors, such as nose poking for access to a treat.

Lin says her laboratory next plans to investigate which specific nerve cells and circuits in the VMHvl are involved in motivating and carrying out aggression.

Source: David March – NYU Langone Medical Center
Image Source: The image is credited to the NIH and is in the public domain.
Original Research: The study will be published in Nature Neuroscience during the week of March 7, 2016.