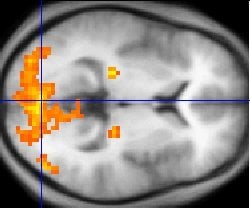 Researchers used fMRI to pinpoint the two brain areas, which they subsequently targeted with magnetic fields that temporarily disrupt neural activity. They found that one area had a specialised and causal role in processing orientation while neural activity in the other underpinned the processing of shape defined by differences in curvature. Credited to Washington irving.
Home
Featured

A new study led by scientists at the Universities of York and Bradford has identified the two areas of the brain responsible for our perception of orientation and shape.

Using sophisticated imaging equipment at York Neuroimaging Centre (YNiC), the research found that the two neighbouring areas of the cortex, each about the size of a 5p coin and known as human visual field maps, process the different types of visual information independently.

The scientists, from the Department of Psychology at York and the Bradford School of Optometry & Vision Science established how the two areas worked by subjecting them to magnetic fields for a short period which disrupted their normal brain activity. The research which is reported in Nature Neuroscience represents an important step forward in understanding how the brain processes visual information.

Attention now switches to a further four areas of the extra-striate cortex which are also responsible for visual function but whose specific individual roles are unknown.

The study was designed by Professor Tony Morland, of York’s Department of Psychology and the Hull York Medical School, and Dr Declan McKeefry, of the Bradford School of Optometry and Vision Science at the University of Bradford. It was undertaken as part of a PhD by Edward Silson at York.

Researchers used functional magnetic resonance imaging (fMRI) equipment at YNiC to pinpoint the two brain areas, which they subsequently targeted with magnetic fields that temporarily disrupt neural activity. They found that one area had a specialised and causal role in processing orientation while neural activity in the other underpinned the processing of shape defined by differences in curvature.

Professor Morland said: “Measuring activity across the brain with FMRI can’t tell us what causal role different areas play in our perception. It is by disrupting brain function in specific areas that allows the causal role of that area to be assessed.

“Historically, neuropsychologists have found out a lot about the human brain by examining people who have had permanent disruption of certain parts of the brain because of injury to it. Unfortunately, brain damage seldom occurs at the spatial scale that allows the function of small neighbouring areas to be understood. Our approach is to temporarily disrupt brain activity by applying brief magnetic fields. When these fields are applied to one, small area of the brain, we find that orientation tasks are harder, while disrupting activity in this area’s nearest neighbour only affected the ability to perceive shapes.”

Dr McKeefry added: “The combination of modern brain scanning technology along with magnetic neuro-stimulation techniques provides us with a powerful means by which we can study the workings of the living human brain.

“The results that we report in this paper provide new insights into how the human brain embarks upon the complex task of analysing objects that we see in the world around us.

“Our work demonstrates how processing of different aspects of visual objects, such as orientation and shape, occurs in different brain areas that lie side by side. The ultimate challenge will be to reveal how this information is combined across these and other brain areas and how it ultimately leads to object recognition.”