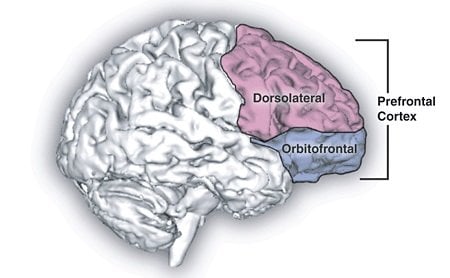 Researchers were able to optogenetically block the formation of new habits. This suggests the IL cortex (which is located in the prefrontal cortex) not only exerts real time control over compulsions, but is also needed for habits to form in the first place. This illustrative image shows the location of the prefrontal cortex in the brain.
Home
Featured

Breaking Habits Before They Start

Turning off cells in a habit-associated brain region prevents rats from learning to run a maze on autopilot.

Our daily routines can become so ingrained that we perform them automatically, such as taking the same route to work every day. Some behaviors, such as smoking or biting your fingernails, become so habitual that we can’t stop even if we want to.

Although breaking habits can be hard, MIT neuroscientists have now shown that they can prevent them from taking root in the first place, in rats learning to run a maze to earn a reward. The researchers first demonstrated that activity in two distinct brain regions is necessary in order for habits to crystallize. Then, they were able to block habits from forming by interfering with activity in one of the brain regions — the infralimbic (IL) cortex, which is located in the prefrontal cortex.

The MIT researchers, led by Institute Professor Ann Graybiel, used a technique called optogenetics to block activity in the IL cortex. This allowed them to control cells of the IL cortex using light. When the cells were turned off during every maze training run, the rats still learned to run the maze correctly, but when the reward was made to taste bad, they stopped, showing that a habit had not formed. If it had, they would keep going back by habit.

“It’s usually so difficult to break a habit,” Graybiel says. “It’s also difficult to have a habit not form when you get a reward for what you’re doing. But with this manipulation, it’s absolutely easy. You just turn the light on, and bingo.”

Graybiel, a member of MIT’s McGovern Institute for Brain Research, is the senior author of a paper describing the findings in the June 27 issue of the journal Neuron. Kyle Smith, a former MIT postdoc who is now an assistant professor at Dartmouth College, is the paper’s lead author.

Previous studies of how habits are formed and controlled have implicated the IL cortex as well as the striatum, a part of the brain related to addiction and repetitive behavioral problems, as well as normal functions such as decision-making, planning and response to reward. It is believed that the motor patterns needed to execute a habitual behavior are stored in the striatum and its circuits.

Recent studies from Graybiel’s lab have shown that disrupting activity in the IL cortex can block the expression of habits that have already been learned and stored in the striatum. Last year, Smith and Graybiel found that the IL cortex appears to decide which of two previously learned habits will be expressed.

“We have evidence that these two areas are important for habits, but they’re not connected at all, and no one has much of an idea of what the cells are doing as a habit is formed, as the habit is lost, and as a new habit takes over,” Smith says.

To investigate that, Smith recorded activity in cells of the IL cortex as rats learned to run a maze. He found activity patterns very similar to those that appear in the striatum during habit formation. Several years ago, Graybiel found that a distinctive “task-bracketing” pattern develops when habits are formed. This means that the cells are very active when the animal begins its run through the maze, are quiet during the run, and then fire up again when the task is finished.

The researchers’ ability to optogenetically block the formation of new habits suggests that the IL cortex not only exerts real-time control over habits and compulsions, but is also needed for habits to form in the first place.

“The previous idea was that the habits were stored in the sensorimotor system and this cortical area was just selecting the habit to be expressed. Now we think it’s a more fundamental contribution to habits, that the IL cortex is more actively making this happen,” Smith says.

This arrangement offers multiple layers of control over habitual behavior, which could be advantageous in reining in automatic behavior, Graybiel says. It is also possible that the IL cortex is contributing specific pieces of the habitual behavior, in addition to exerting control over whether it occurs, according to the researchers. They are now trying to determine whether the IL cortex and the striatum are communicating with and influencing each other, or simply acting in parallel.

“A role for the IL cortex in the regulation of habit is not a new idea, but the details of the interaction between it and the striatum that emerge from this analysis are novel and interesting,” says Christopher Pittenger, an assistant professor of psychiatry and psychology at Yale University School of Medicine, who was not part of the research team. “Thinking in the long term, it raises the question of whether targeted manipulations of the IL cortex might be useful for the breaking habits — and exciting possibility with potential clinical ramifications.”

The study suggests a new way to look for abnormal activity that might cause disorders of repetitive behavior, Smith says. Now that the researchers have identified the neural signature of a normal habit, they can look for signs of habitual behavior that is learned too quickly or becomes too rigid. Finding such a signature could allow scientists to develop new ways to treat disorders of repetitive behavior by using deep brain stimulation, which uses electronic impulses delivered by a pacemaker to suppress abnormal brain activity.

Notes about this neuropsychology and optogenetics research

The research was funded by the National Institutes of Health, the Office of Naval Research, the Stanley H. and Sheila G. Sydney Fund and funding from R. Pourian and Julia Madadi.