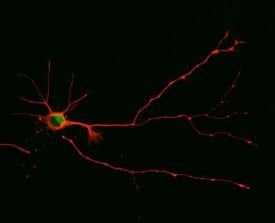 In this study, UA researchers discovered that a neuron will form multiple axons as seen here when they blocked the short version of a signaling molecule from functioning. Image credited to Sara Parker/UA.
Home
Featured

How Neurons Get Wired

Two different versions of the same signaling protein tell a nerve cell which end is which, UA researchers have discovered. The findings could help improve therapies for spinal injuries and neurodegenerative diseases.

University of Arizona scientists have discovered an unknown mechanism that establishes polarity in developing nerve cells. Understanding how nerve cells make connections is an important step in developing cures for nerve damage resulting from spinal cord injuries or neurodegenerative diseases such as Alzheimer’s.

In a study published on Aug. 12 in the journal Proceedings of the National Academy of Sciences, UA doctoral student Sara Parker and her adviser, assistant professor of cellular and molecular medicine Sourav Ghosh, report that the decision which will be the “plus” and the “minus” end in a newborn nerve cell is made by a long and a short version of the same signaling molecule.

Nerve cells – or neurons – differ from many other cells by their highly asymmetric shape: Vaguely resembling a tree, a neuron has one long, trunk-like extension ending in a tuft of root-like bristles. This is called the axon. From the opposite end of the cell body sprout branch-like structures known as dendrites. By connecting the “branches” of their dendrites to the “root tips” of other neurons’ axons, nerve cells form networks, which can be as simple as the few connections involved in the knee-jerk reflex or as complex as those in the human brain.

Parker and her team found that embryonic nerve cells manufacture a well-known signaling enzyme called Atypical Protein Kinase C (aPKC) in two varieties: a full-length one and a truncated one. Both varieties compete to bind the same molecular partner, a protein called Par3. If the short form of aPKC pairs up with Par3, it tells the cell to grow a dendrite, and if the long one pairs up with Par3, it will make an axon instead.

When the researchers blocked the production of the short form, the nerve cell grew multiple axons and no dendrites. When they created an artificial abundance of the short form, dendrites formed at the expense of axons. UA undergraduate student Sophie Hapak performed many of the experiments revealing how the two isoforms compete for Par3.

“We show that wiring a neuronal circuit is much more complex than previously thought,” said Ghosh. “The process has a built-in robustness that explicitly defines which part of the cell is ‘positive’ and which is ‘negative.'”

“In order to have a functioning neuronal circuit, you have to have receiving and sending ends,” Parker said. “Initially, when a neuron is formed, it lacks the polarity it needs once it develops into a part of a circuit. The mechanism we discovered establishes that polarity.”

“How the various brain regions are wired is the basis of emotion, memory and all cognitive functions,” said Ghosh, who is a member of the UA’s BIO5 Institute. “Establishing neuronal polarity in single neurons is absolutely essential for neuronal circuits to form.”

“If we understand this mechanism, we could think about methods to spur new axons after the original ones were severed in a traumatic spinal cord injury, for example,” Ghosh said.

The findings defy conventional wisdom, which maintains that a developing neuron will make dendrites by default unless instructed by the long form of aPKC to make an axon instead. By cultivating and studying neurons just after they formed, Parker and her group found that both forms of aPKC, long and short, are initially distributed equally throughout the cell. These forms subsequently segregate into different parts of the cell as the neuron matures and establishes polarity.

Because the cells were isolated from rat brains and kept in culture, the researchers could demonstrate that no external clues from other cells are needed to instruct a developing neuron. Whether the establishment of polarity is a random process or whether other signals yet to be identified play a role in regulating the abundance of the two aPKC varieties is not known.

Funded by the National Institutes of Health and a scholarship awarded to Parker by the Achievement Rewards for College Scientists Foundation, Inc., this research resulted from a collaboration of three UA departments – cellular and molecular medicine, pharmacology and physiology.