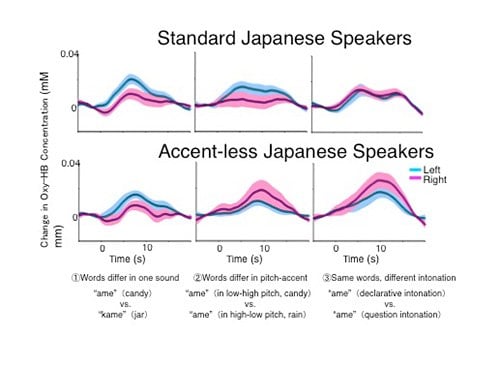 Using advanced imaging to visualize brain areas used for understanding language in native Japanese speakers, a new study from the RIKEN Brain Science Institute finds that the pitch-accent in words pronounced in standard Japanese activates different brain hemispheres depending on whether the listener speaks standard Japanese or one of the regional dialects.

In the study published in the journal Brain and Language, Drs. Yutaka Sato, Reiko Mazuka and their colleagues examined if speakers of a non-standard dialect used the same brain areas while listening to spoken words as native speakers of the standard dialect or as someone who acquired a second language later in life.

When we hear language our brain dissects the sounds to extract meaning. However, two people who speak the same language may have trouble understanding each other due to regional accents, such as Australian and American English. In some languages, such as Japanese, these regional differences are more pronounced than an accent and are called dialects.

Unlike different languages that may have major differences in grammar and vocabulary, the dialects of a language usually differ at the level of sounds and pronunciation. In Japan, in addition to the standard Japanese dialect, which uses a pitch-accent to distinguish identical words with different meanings, there are other regional dialects that do not.

Similar to the way that a stress in an English word can change its meaning, such as “pro’duce” and “produ’ce”, identical words in the standard Japanese language have different meanings depending on the pitch-accent. The syllables of a word can have either a high or a low pitch and the combination of pitch-accents for a particular word imparts it with different meanings.

RIKEN neuroscientists used Near Infrared Spectroscopy (NIRS) to examine whether the two brain hemispheres are activated differently in response to pitch changes embedded in a pair of words in standard and accent-less dialect speakers. This non-invasive way to visualize brain activity is based on the fact that when a brain area is active, blood supply increases locally in that area and this increase can be detected with an infrared laser.

It is known that pitch changes activate both hemispheres, whereas word meaning is preferentially associated with the left-hemisphere. When the participants heard the word pair that differed in pitch-accent, /ame’/ (candy) vs /a’me/ (rain), the left hemisphere was predominantly activated in standard dialect speakers, whereas in accent-less dialect speakers did not show the left-dominant activation. Thus, standard Japanese speakers use the pitch-accent to understand the word meaning. However, accent-less dialect speakers process pitch changes similar to individuals who learn a second language later in life.

The results are surprising because both groups are native Japanese speakers who are familiar with the standard dialect. “Our study reveals that an individual’s language experience at a young age can shape the way languages are processed in the brain,” comments Dr. Sato. “Sufficient exposure to a language at a young age may change the processing of a second language so that it is the same as that of the native language.”

Notes about this neuroscience and language research