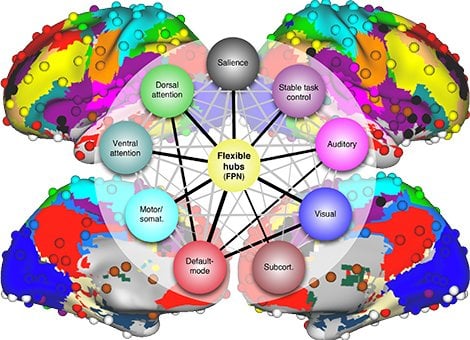 One thing that sets humans apart from other animals is our ability to intelligently and rapidly adapt to a wide variety of new challenges — using skills learned in much different contexts to inform and guide the handling of any new task at hand.

Now, research from Washington University in St. Louis offers new and compelling evidence that a well-connected core brain network based in the lateral prefrontal cortex and the posterior parietal cortex — parts of the brain most changed evolutionarily since our common ancestor with chimpanzees — contains “flexible hubs” that coordinate the brain’s responses to novel cognitive challenges.

Acting as a central switching station for cognitive processing, this fronto-parietal brain network funnels incoming task instructions to those brain regions most adept at handling the cognitive task at hand, coordinating the transfer of information among processing brain regions to facilitate the rapid learning of new skills, the study finds.

“Flexible hubs are brain regions that coordinate activity throughout the brain to implement tasks — like a large Internet traffic router,” suggests Michael Cole, PhD., a postdoctoral research associate in psychology at Washington University and lead author of the study published July 29 in the journal Nature Neuroscience.

“Like an Internet router, flexible hubs shift which networks they communicate with based on instructions for the task at hand and can do so even for tasks never performed before,” he adds.

Decades of brain research has built a consensus understanding of the brain as an interconnected network of as many as 300 distinct regional brain structures, each with its own specialized cognitive functions.

Binding these processing areas together is a web of about a dozen major networks, each serving as the brain’s means for implementing distinct task functions — i.e. auditory, visual, tactile, memory, attention and motor processes.

It was already known that fronto-parietal brain regions form a network that is most active during novel or non-routine tasks, but it was unknown how this network’s activity might help implement tasks.

This study proposes and provides strong evidence for a “flexible hub” theory of brain function in which the fronto-parietal network is composed of flexible hubs that help to organize and coordinate processing among the other specialized networks.

Second, by closely analyzing activity patterns as the flexible hubs connect with various brain regions during the processing of specific tasks, researchers determined that these connection patterns include telltale characteristics that can be decoded and used to identify which specific task is being implemented by the brain.

These unique patterns of connection — like the distinct strand patterns of a spider web — appear to be the brain’s mechanism for the coding and transfer of specific processing skills, the study suggests.

By tracking where and when these unique connection patterns occur in the brain, researchers were able to document flexible hubs’ role in shifting previously learned and practiced problem-solving skills and protocols to novel task performance. Known as compositional coding, the process allows skills learned in one context to be re-packaged and re-used in other applications, thus shortening the learning curve for novel tasks.

What’s more, by tracking the testing performance of individual study participants, the team demonstrated that the transfer of these processing skills helped participants speed their mastery of novel tasks, essentially using previously practiced processing tricks to get up to speed much more quickly for similar challenges in a novel setting.

“The flexible hub theory suggests this is possible because flexible hubs build up a repertoire of task component connectivity patterns that are highly practiced and can be reused in novel combinations in situations requiring high adaptivity,” Cole explains.

“It’s as if a conductor practiced short sound sequences with each section of an orchestra separately, then on the day of the performance began gesturing to some sections to play back what they learned, creating a new song that has never been played or heard before.”

By improving our understanding of cognitive processes behind the brain’s handling of novel situations, the flexible hub theory may one day help us improve the way we respond to the challenges of everyday life, such as when learning to use new technology, Cole suggests.

“Additionally, there is evidence building that flexible hubs in the fronto-parietal network are compromised for individuals suffering from a variety of mental disorders, reducing the ability to effectively self-regulate and therefore exacerbating symptoms,” he says.

Making Sense of Socially Enhanced Aggression in the Brain

Future research may provide the means to enhance flexible hubs in ways that would allow people to increase self-regulation and reduce symptoms in a variety of mental disorders, such as depression, schizophrenia and obsessive-compulsive disorder.

Notes about this neuroscience and cognitive processing research

The study is co-authored by a team of researchers with close ties to Washington University:

Todd Braver, PhD, professor of psychology in Arts & Sciences, is co-director of the University’s Cognitive Control and Psychopathology Laboratory.

Jeremy R. Reynolds, PhD., now an assistant professor of psychology at the University of Denver, earned a doctoral degree in psychology from Washington University in 2005.

Grega Repovs, PhD, a professor of psychology with the University of Ljubljana in Slovenia, has conducted research at Washington University as a visiting postdoctoral fellow.