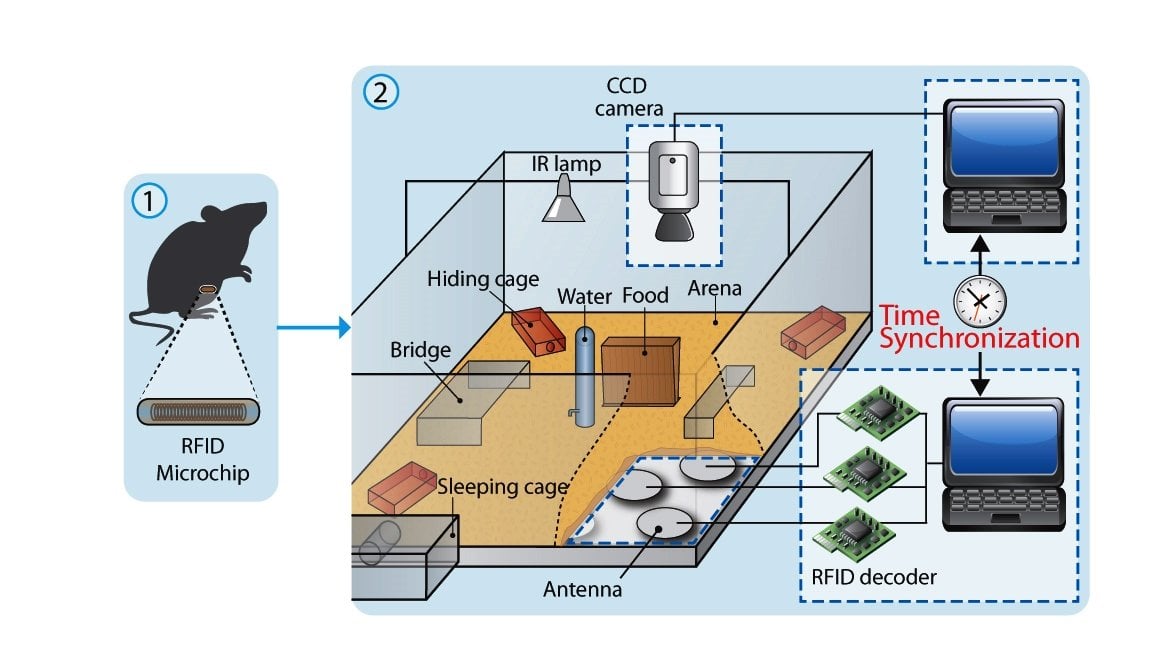 In further experiments, the “house” inhabitants comprised one of two strains of mice, the first more “social” and the second “autistic” (exhibiting little social engagement and rigid behavior patterns). The system automatically identified the “autistic” mice by identifying their patterns of movement and public behavior. Credited to Weizmann Institute of Science.
Home
Events

How does a social animal – mouse or human – gain dominance over his or her fellow creatures? A unique experiment conducted by Dr. Tali Kimchi and her team in the Weizmann Institute’s Neurobiology Department provides some unusual insight into the social behavior that enables a social hierarchy, complete with a head honcho, to form.

Kimchi and her research team, Aharon Weissbrod, Genady Wasserman and Alex Shapiro, together with Dr. Ofer Feinerman of the Institute’s Physics of Complex Systems Department, developed a system that enabled them to observe a large group of animals living together in semi-natural conditions. This setup was a sort of mouse version of the television show Big Brother. Different strains of mice were placed in the “house” – a four-meter-square pen – and allowed to go about their lives with no intervention from the human team. To automatically track the mice day and night, each mouse was implanted with an ID chip similar to those used in pet cats and dogs, and video cameras were placed strategically around the area with infrared lighting that enabled nighttime filming. With the combined chip reporting and continuous video footage, the system could automatically keep tabs on each individual mouse, knowing its precise location down to the half centimeter, in measurements that were recorded thirty times a second for days and sometimes even months on end.

Because the information they obtained was so precise, the team was able to identify dozens of individual behaviors – eating, drinking, running, sleeping, hiding, etc. – as well as social behaviors – seeking out specific companions for activities or rest, avoiding certain individuals, attacking others, and more. The researchers found that it was possible to isolate and identify typical behaviors of individuals, pairs and groups. In fact just by sorting out behavioral patterns, the automated system was able to differentiate between the various genetic strains of the mice in the mixed groups, as well as predicting mating, with over 90% accuracy. These close observations revealed, among other social features, how one of the individuals became “king” of the group, attaining dominance over the others, both male and female.

In further experiments, the “house” inhabitants comprised one of two strains of mice, the first more “social” and the second “autistic” (exhibiting little social engagement and rigid behavior patterns). The system automatically identified the “autistic” mice by identifying their patterns of movement and public behavior.

In a paper that appears this week in Nature Communications, Kimchi and her team describe the emergence of the dominant leader and the development of a class system in a group of normal mice – just within a 24-hour period. Surprisingly, when they conducted a similar experiment with the autistic-like mice, either no leader emerged or, if one did, he was quickly overthrown.

The precise, automatic, semi-natural system the scientists have developed is enabling a deep, systematic study of the mechanisms for regulating social behavior in animal models; it may be especially useful for providing insight into the societal aspects of such disorders as schizophrenia and autism.

Notes about this psychology and behavioral neuroscience research

Dr. Ofer Feinerman’s research is supported by the Clore Foundation. Dr. Feinerman is the incumbent of the Shlomo and Michla Tomarin Career Development Chair.

Dr. Tali Kimchi’s research is supported by the Nella and Leon Benoziyo Center for Neurological Diseases; the Joan and Jonathan Birnbach Family Laboratory Fund; the Abisch Frenkel Foundation for the Promotion of Life Sciences; the Peter and Patricia Gruber Awards; Mike and Valeria Rosenbloom through the Mike Rosenbloom Foundation; the Harris Foundation for Brain Research; and the estate of Fannie Sherr. Dr. Kimchi is the incumbent of the Jenna and Julia Birnbach Family Career Development Chair.