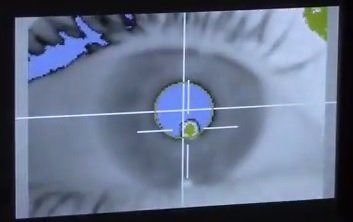 Both schizophrenia patients and participants from a control group were asked to predict the trajectory of a small dot which appeared briefly on a monitor as it moved toward a vertical line. During the experiment, an infrared equipped video camera tracked their eye movements while the participants called out whether the dot would hit or miss the line. Schizophrenic patients performed significantly worse at predicting the hits or misses, as well as tracking the dot with their eyes.
Home
Featured

By observing the eye movements of schizophrenia patients while playing a simple video game, a University of British Columbia researcher has discovered a potential explanation for some of their symptoms, including difficulty with everyday tasks.

The research, published in a recent issue of the Journal of Neuroscience, shows that, compared to healthy controls, schizophrenia patients had a harder time tracking a moving dot on the computer monitor with their eyes and predicting its trajectory. But the impairment of their eye movements was not severe enough to explain the difference in their predictive performance, suggesting a breakdown in their ability to interpret what they saw.

Lead author Miriam Spering, an assistant professor of ophthalmology and visual sciences, says the patients were having trouble generating or using an “efference copy” – a signal sent from the eye movement system in the brain indicating how much, and in what direction, their eyes have moved. The efference copy helps validate visual information from the eyes.

“An impaired ability to generate or interpret efference copies means the brain cannot correct an incomplete perception,” says Spering, who conducted the dot-tracking experiments as a postdoctoral fellow at New York University, and is now conducting similar studies at UBC. The brain might fill in the blanks by extrapolating from prior experience, contributing to psychotic symptoms, such as hallucinations.

“But just as a person might, through practice, improve their ability to predict the trajectory of a moving dot, a person might be able to improve their ability to generate or use that efference copy,” Spering says. “My vision would be a mobile device that patients could use to practice that skill, so they could more easily do common tasks that involve motion perception, such as walking along a crowded sidewalk.”

Background – Keeping an eye on the ball

For the UBC study, schizophrenia patients, along with a control group, were asked to predict the trajectory of a small dot that appeared briefly on a monitor as it moved toward a vertical line. As an infrared-equipped video camera tracked their eye movements, participants would call out whether it would hit or miss the line. The schizophrenia patients performed significantly worse than the control group in predicting hits and misses, and they were also not as good at tracking the dot with their eyes.

Schizophrenia is a brain disorder affecting about one per cent of the population that often causes people to hear voices that others don’t hear or see things that others don’t see. They can also be incoherent when talking, or may sit quietly for hours without moving or talking. People with schizophrenia often have poor motion perception and eye movements, leading them to bump into people while walking or making it a challenge to cross a street. They often cannot perform even simple tasks like preparing a shopping list or reading a transportation map.

Better baseball through science: Spering is working with UBC baseball head coach Terry McKaig, who sought out her expertise in visual neuroscience to improve his team’s hitting. She will soon begin testing players’ eye movements while they hit balls in a batting cage. “Coach McKaig is extremely interested in the science, and excited about the possibility to include vision training into the team’s daily routine,” Spering says. “We are using a highly scientific approach to first understand the mechanisms that could lead to improvements, and then using our knowledge to enhance performance in the field.”