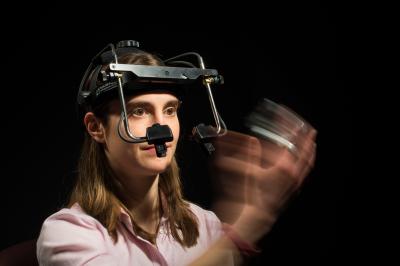 Study participant Lindsay Bronnenkant demonstrates the vision task used in a new study by Duje Tadin, a professor of cognitive sciences at the University of Rochester. With the help of computerized eye trackers, Tadin and his team found that at least 50 percent of people can see the movement of their own hand in the absence of all light. "What I saw was a blur," says Bronnenkant, "It was very dim, but it was almost like I was looking at a light source." Credited to J. Adam Fenster, University of Rochester.
Home
Featured

Seeing in the Dark: Most People Can See Their Body’s Movement in the Absence of Light

Find a space with total darkness and slowly move your hand from side to side in front of your face. What do you see?

If the answer is a shadowy shape moving past, you are probably not imagining things. With the help of computerized eye trackers, a new cognitive science study finds that at least 50 percent of people can see the movement of their own hand even in the absence of all light.

“Seeing in total darkness? According to the current understanding of natural vision, that just doesn’t happen,” says Duje Tadin, a professor of brain and cognitive sciences at the University of Rochester who led the investigation. “But this research shows that our own movements transmit sensory signals that also can create real visual perceptions in the brain, even in the complete absence of optical input.”

Through five separate experiments involving 129 individuals, the authors found that this eerie ability to see our hand in the dark suggests that our brain combines information from different senses to create our perceptions. The ability also “underscores that what we normally perceive of as sight is really as much a function of our brains as our eyes,” says first author Kevin Dieter, a post-doctoral fellow in psychology at Vanderbilt University.

The study seems to confirm anecdotal reports that spelunkers in lightless caves often are able to see their hands. In other words, the “spelunker illusion,” as one blogger dubbed it, is likely not an illusion after all.

For most people, this ability to see self-motion in darkness probably is learned, the authors conclude. “We get such reliable exposure to the sight of our own hand moving that our brains learn to predict the expected moving image even without actual visual input,” says Dieter.

Although seeing one’s hand move in the dark may seem simple, the experimental challenge in this study was to measure objectively a perception that is, at its core, subjective. That hurdle at first stumped Tadin and his postdoctoral advisor at Vanderbilt Randolph Blake after they initially stumbled upon the puzzling observation in 2005. “While the phenomenon looked real to us, how could we determine if other people were really seeing their own moving hand rather than just telling us what they thought we wanted to hear?” asks Blake, the Centennial Professor of Psychology at Vanderbilt and a co-author on the paper.

Years later, Dieter, at the time a doctoral student working in Tadin’s Rochester lab, helped devise several experiments to probe the sight-without-light mystery. For starters, the researchers set up false expectations. In one scenario, they led subjects to expect to see “motion under low lighting conditions” with blindfolds that appeared to have tiny holes in them. In a second set up, the same participants had similar blindfolds without the “holes” and were led to believe they would see nothing. In both set ups, the blindfolds were, in fact, equally effective at blocking out all light. A third experiment consisted of the experimenter waving his hand in front of the blindfolded subject. Ultimately, participants were fitted with a computerized eye tracker in total darkness to confirm whether self-reported perceptions of movement lined up with objective measures.

In addition to testing typical subjects, the team also recruited people who experience a blending of their senses in daily life. Known as synesthetes, these individuals may, for example, see colors when they hear music or even taste sounds. This study focused on grapheme-color synesthetes, individuals who always see numbers or letters in specific colors.

The researchers enlisted individuals from Rochester, Nashville, Fenton, Michigan, and Seoul, South Korea, but, in a lucky coincidence, one synesthete could not have been closer. At the time, Lindsay Bronnenkant was working as a lab technician for co-author David Knill, a professor of brain and cognitive sciences at Rochester.

“As a child, I just assumed that everybody associated colors with letters,” says the 2010 Rochester graduate who majored in brain and cognitive sciences. For Bronnenkant, “A is always yellow, but Y is an oranger yellow.” B is navy, C burnt orange, and so on. She thought of these associations as normal, “like when you smell apple pie and you think of grandma.” She doesn’t remember a time when she did not see numbers and letters in color, but she does wonder if the particular colors she associates with numbers derived from the billiard balls her family had going up. When she donned the blindfold and waved her hand in the experiment, “what I saw was a blur. It was very dim, but it was almost like I was looking at a light source.”

Bronnenkant was not atypical in that respect. Across all types of participants, about half detected the motion of their own hand and they did so consistently, despite the expectations created with the faux holes. And very few subjects saw motion when the experimenter waved his hand, underscoring the importance of self-motion in this visual experience. As measured by the eye tracker, subjects who reported seeing motion were also able to smoothly track the motion of their hand in darkness more accurately than those who reported no visual sensation—46 percent versus 20 percent of the time.

Reports of the strength of visual images varied widely among participants, but synesthetes were strikingly better at not just seeing movement, but also experiencing clear visual form. As an extreme example in the eye tracking experiment, one synesthete exhibited near perfect smooth eye movement—95 percent accuracy—as she followed her hand in darkness. In other words, she could track her hand in total darkness as well as if the lights were on.

“You can’t just imagine a target and get smooth eye movement,” explains Knill. “If there is no moving target, your eye movements will be noticeably jerky.”

The link with synesthesia suggests that our human ability to see self-motion is based on neural connections between the senses, says Knill. “We know that sensory cross talk underlies synesthesia. But seeing color with numbers is probably just the tip of the iceberg; synesthesia may involve many areas of atypical brain processing.”

Does that mean that most humans are preprogrammed to see themselves in the dark? Not likely, says Tadin. “Innate or experience? I’m pretty sure it’s experience,” he concludes. “Our brains are remarkably good at finding such reliable patterns. The brain is there to pick up patterns—visual, auditory, thinking, movement. And this is one association that is so highly repeatable that it is logical our brains picked up on it and exploited it.”

Whether hardwired or learned, Bronnenkant finds the cross talk between her senses a potent reminder of the underlying interconnectivity of nature. “It’s almost a spiritual thing,” she says. “Sometimes, yeah, I think to myself, ‘I just got this sense from a billiard ball,’ but other times I think that being able to cross modalities actually reflects how unified the world is. We think of math and chemistry and art as different fields, but really they are facets of the same world; they are just ways of looking at the world through different lenses.”

Notes about this visual neuroscience and psychology research