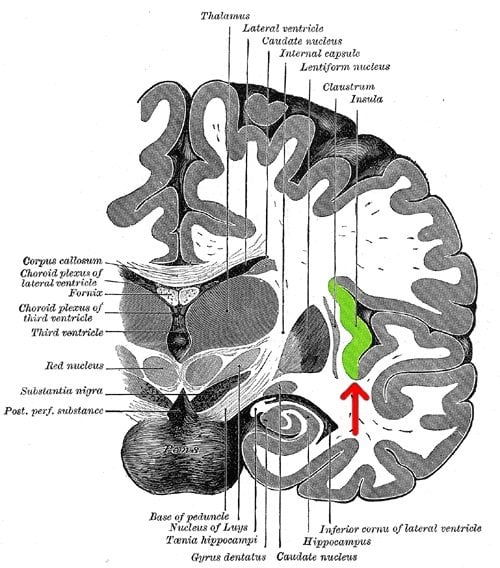 Scientists at The University of Nottingham have shown that psychotic symptoms experienced by people with schizophrenia could be caused by a faulty ‘switch’ within the brain.

In a study published today in the leading journal Neuron, they have demonstrated that the severity of symptoms such as delusions and hallucinations which are typical in patients with the psychiatric disorder is caused by a disconnection between two important regions in the brain — the insula and the lateral frontal cortex.

The breakthrough, say the academics, could form the basis for better, more targeted treatments for schizophrenia with fewer side effects.

The four-year study, led by Professor Peter Liddle and Dr Lena Palaniyappan in the University’s Division of Psychiatry and based in the Institute of Mental Health, centred on the insula region, a segregated ‘island’ buried deep within the brain, which is responsible for seamless switching between inner and outer world.

Dr Lena Palaniyappan, a Wellcome Trust Research Fellow, said: “In our daily life, we constantly switch between our inner, private world and the outer, objective world. This switching action is enabled by the connections between the insula and frontal cortex. This switch process appears to be disrupted in patients with schizophrenia. This could explain why internal thoughts sometime appear as external objective reality, experienced as voices or hallucinations in this condition. This could also explain the difficulties in ‘internalising’ external material pleasures (e.g. enjoying a musical tune or social events) that result in emotional blunting in patients with psychosis. Our observation offers a powerful mechanistic explanation for the formation of psychotic symptoms.”

Several brain regions are engaged when we are lost in thought or, for example, remembering a past event. However, when interrupted by a loud noise or another person speaking we are able to switch to using our frontal cortex area of the brain, which processes this external information. With a disruption in the connections from the insula, such switching may not be possible.

The Nottingham scientists used functional MRI (fMRI) imaging to compare the brains of 35 healthy volunteers with those of 38 schizophrenic patients. The results showed that whereas the majority of healthy patients were able to make this switch between regions, the patients with schizophrenia were less likely to shift to using their frontal cortex.

The results suggest that detecting the lack of a positive influence from the insula to the frontal cortex using fMRI could have a high degree of predictive value in identifying patients with schizophrenia.

The results of the study offer vital information for the development of more effective treatments for the condition.

Schizophrenia is one of the most common serious mental health conditions affecting around 1 in 100 people. Its onset occurs most commonly in a patient’s late teens or early 20s which can have devastating consequences for their future.

Scientists remain unsure what causes schizophrenia but believe it could be a combination of a genetic predisposition to the condition combined with environmental factors. Drug use is known to be a key trigger – people who use cannabis, or stimulant drugs, are three to four times more likely to go on to develop recurrent psychotic symptoms.

It is also believed that underdevelopment of the brain in the womb caused by complications in the mother’s pregnancy and in early childhood linked to issues such as malnutrition could play a key part. Previous observations from this research group have also uncovered the presence of unusually smooth folding patterns of the brain over the insula region in patients, suggesting an impairment in the normal development of this structure in schizophrenia.

At present, treatment involves a combination of antipsychotic medications, psychological therapies and social interventions. Currently, only one in five patients with schizophrenia achieve complete recovery and many patients who develop the condition in the long-term struggle to find a treatment that is 100 per cent effective in managing their condition.

Antipsychotic drugs, though effective in a number of patients, have poor acceptance rates due to the side effect burden meaning that many patients stop taking them in the longer run, leading to recurrence of disabling symptoms.

Researchers in Nottingham are also looking at a technique called TMS – transcranial magnetic stimulation — which uses a powerful magnetic pulse to stimulate the brain regions that are malfunctioning.

Despite the fact that the insular region is buried so deeply within the brain that TMS would usually be ineffective, the results of the Nottingham study suggest that the loop between the insular and the frontal cortex could be exploited for TMS– if a pulse is delivered to the frontal lobe it could stimulate the insula and reset the ‘switch’.

Other future treatment options could include the use of a compassion-based meditation therapy called mindfulness, which may have the potential to ‘reset’ the switching function of the insula and can promote physical changes within the brain. Meditation over a long period of time has been shown to increase the folding patterns within the insula area of the brain. These ideas are in its early stages at present, but may deliver more focussed treatment approaches in the longer term.

Notes about this neuropsychiatry and schizophrenia research

This study was funded with a £614,000 grant from the Medical Research Council (MRC) and a research fellowship from the Wellcome Trust to Dr. Palaniyappan. The research was conducted with support from the Institute of Mental Health, a partnership between University of Nottingham and Nottinghamshire Healthcare NHS Trust. The paper, Neural Primacy of the Salience Processing System in Schizophrenia, is available online on Neuron’s website.