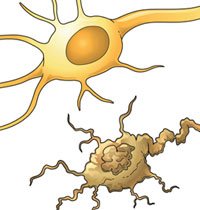 After a stroke, neurons may undergo apoptosis, dismantling their internal machinery and breaking down their DNA. The study showed that a specific microRNA, miR-133b, carried by exosomes contributes to functional recovery after a stroke.
Home
Featured

A specific MicroRNA, a short set of RNA (ribonuclease) sequences, naturally packaged into minute (50 nanometers) lipid containers called exosomes, are released by stem cells after a stroke and contribute to better neurological recovery according to a new animal study by Henry Ford Hospital researchers.

The important role of a specific microRNA transferred from stem cells to brain cells via the exosomes to enhance functional recovery after a stroke was shown in lab rats. This study provides fundamental new insight into how stem cells affect injured tissue and also offers hope for developing novel treatments for stroke and neurological diseases, the leading cause of long-term disability in adult humans.

The study is to be published in the journal Stem Cells.

Although most stroke victims recover some ability to voluntarily use their hands and other body parts, nearly half are left with weakness on one side of their body, while a substantial number are permanently disabled.

Currently no treatment exists for improving or restoring this lost motor function in stroke patients, mainly because of mysteries about how the brain and nerves repair themselves.

“This study may have solved one of those mysteries by showing how certain stem cells play a role in the brain’s ability to heal itself to differing degrees after stroke or other trauma,” says study author Michael Chopp, Ph.D., scientific director of the Henry Ford Neuroscience Institute and vice chairman of the department of Neurology at Henry Ford Hospital.

The researchers noted that Henry Ford’s Institutional Animal Care and Use Committee approved all the experimental procedures used in the new study.

The experiment began by isolating mesenchymal stem cells (MSCs) from the bone marrow of lab rats. These MSCs are then genetically altered to release exosomes that contain specific microRNA molecules. The MSCs then become “factories” producing exosomes containing specific microRNAs. These microRNAs act as master switches that regulate biological function.

The new study showed for the first time that a specific microRNA, miR-133b, carried by these exosomes contributes to functional recovery after a stroke.

The researchers genetically raised or lowered the amount of miR-133b in MSCs and, respectively, treated the rats. When these MSCs are injected into the bloodstream 24 hours after stroke, they enter the brain and release their exosomes. When the exosomes were enriched with the miR-133b, they amplified neurological recovery, and when the exosomes were deprived of the miR-133b, the neurological recovery was substantially reduced.

Stroke was induced under anesthesia by inserting a nylon thread up the carotid artery to occlude a major artery in the brain, the middle cerebral artery. MSCs were then injected 24 hours after the induction of stroke in these animals and neurological recovery was measured.

As a measure on neurological recovery, rats were given two types of behavioral tests to measure the normal function of their front legs and paws – a “foot-fault test,” to see how well they could walk on an unevenly spaced grid; and an “adhesive removal test” to measure how long it took them to remove a piece of tape stuck to their front paws.

Researchers then separated the disabled rats into several groups and injected each group with a specific dosage of saline, MSCs and MSCs with increased or decreased miR-133b, respectively. The two behavioral tests were again given to the rats three, seven and 14 days after treatment.

While the research team was careful to note that this was an animal study, its findings offer hope for new ways to address the single biggest concern of stroke victims as well as those with neural injury such as traumatic brain injury and spinal cord damage – regaining neurological function for a better quality of life.

Notes about this neurogenetics, neuroplasticity and stroke recovery research