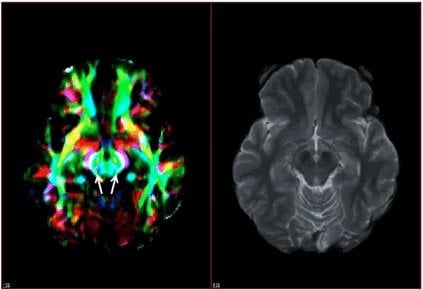 Diffusion tensor imaging, known as DTI, is a non-invasive method that examines the diffusion of water molecules within the brain and can identify key areas that have been affected as a result of damage to gray matter and white matter in the brain. The image shows a brain scan of a patient with Parkinson's disease.
Home
Featured

A new University of Florida study suggests a promising brain-imaging technique has the potential to improve diagnoses for the millions of people with movement disorders such as Parkinson’s disease.

Utilizing the diffusion tensor imaging technique, as it is known, could allow clinicians to assess people earlier, leading to improved treatment interventions and therapies for patients.

The three-year study looked at 72 patients, each with a clinically defined movement disorder diagnosis. Using a technique called diffusion tensor imaging, the researchers successfully separated the patients into disorder groups with a high degree of accuracy.

The study is being published in the journal Movement Disorders.

“The purpose of this study is to identify markers in the brain that differentiate movement disorders which have clinical symptoms that overlap, making [the disorders] difficult to distinguish,” said David Vaillancourt, associate professor in the department of applied physiology and kinesiology and the study’s principal investigator.
“No other imaging, cerebrospinal fluid or blood marker has been this successful at differentiating these disorders,” he said. “The results are very promising.”

Movement disorders such as Parkinson’s disease, essential tremor, multiple system atrophy and progressive supranuclear palsy exhibit similar symptoms in the early stages, which can make it challenging to assign a specific diagnosis. Often, the original diagnosis changes as the disease progresses, Vaillancourt said.

Diffusion tensor imaging, known as DTI, is a non-invasive method that examines the diffusion of water molecules within the brain and can identify key areas that have been affected as a result of damage to gray matter and white matter in the brain. Vaillancourt and his team measured areas of the basal ganglia and cerebellum in individuals, and used a statistical approach to predict group classification. By asking different questions within the data and comparing different groups to one another, they were able to show distinct separation among disorders.

“Our goal was to use these measures to accurately predict the original disease classification,” Vaillancourt said. “The idea being that if a new patient came in with an unknown diagnosis, you might be able to apply this algorithm to that individual.

He compared the process to a cholesterol test.

“If you have high cholesterol, it raises your chances of developing heart disease in the future,” he said. “There are tests like those that give a probability or likelihood scenario of a particular disease group. We’re going a step further and trying to utilize information to predict the classification of specific tremor and Parkinsonian diseases.”

Vaillancourt and his team are part of the National Institute of Neurological Disorders and Stroke Parkinson’s Disease Biomarkers Program, an effort that was launched in 2012 and awarded nine grants to scientists across the U.S., totaling more than $5 million in the first year. The program gives researchers access to a much broader community of individuals and patients as part of a biomarker initiative for Parkinson’s disease.

Vaillancourt’s team is engaged in a longitudinal study at UF that will assess between 150 and 180 people over the next few years. His team will be using DTI as well as other MRI-based techniques to classify subjects and track their progression, he said.

Notes about this neuroimaging and movement disorder research