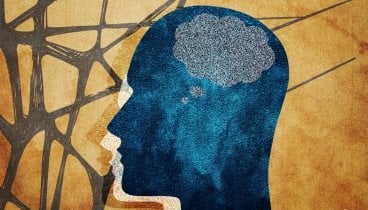 Researchers have discovered a gene, Tet1, which is critical to the process of memory extinction. By enhancing the activity of this gene, fearful memories can be more easily replaced with positive associations. The finding could help those who suffer from PTSD. The illustration is credited to Christine Daniloff, MIT.
Home
Featured

How Old Memories Fade Away

Discovery of a gene essential for memory extinction could lead to new PTSD treatments.

If you got beat up by a bully on your walk home from school every day, you would probably become very afraid of the spot where you usually met him. However, if the bully moved out of town, you would gradually cease to fear that area.

A new study from MIT reveals a gene that is critical to the process of memory extinction. Enhancing the activity of this gene, known as Tet1, might benefit people with posttraumatic stress disorder (PTSD) by making it easier to replace fearful memories with more positive associations, says Li-Huei Tsai, director of MIT’s Picower Institute for Learning and Memory.

The Tet1 gene appears to control a small group of other genes necessary for memory extinction. “If there is a way to significantly boost the expression of these genes, then extinction learning is going to be much more active,” says Tsai, the Picower Professor of Neuroscience at MIT and senior author of a paper appearing in the Sept. 18 issue of the journal Neuron.

Tsai’s team worked with researchers in MIT biology professor Rudolf Jaenisch’s lab at the Whitehead to study mice with the Tet1 gene knocked out. Tet1 and other Tet proteins help regulate the modifications of DNA that determine whether a particular gene will be expressed or not. Tet proteins are very abundant in the brain, which made scientists suspect they might be involved in learning and memory.

To their surprise, the researchers found that mice without Tet1 were perfectly able to form memories and learn new tasks. However, when the team began to study memory extinction, significant differences emerged.

To measure the mice’s ability to extinguish memories, the researchers conditioned the mice to fear a particular cage where they received a mild shock. Once the memory was formed, the researchers then put the mice in the cage but did not deliver the shock. After a while, mice with normal Tet1 levels lost their fear of the cage as new memories replaced the old ones.

In another set of experiments involving spatial memory, the researchers found that mice lacking the Tet1 gene were able to learn to navigate a water maze, but were unable to extinguish the memory.

The researchers found that Tet1 exerts its effects on memory by altering the levels of DNA methylation, a modification that controls access to genes. High methylation levels block the promoter regions of genes and prevent them from being turned on, while lower levels allow them to be expressed.

Many proteins that methylate DNA have been identified, but Tet1 and other Tet proteins have the reverse effect, removing DNA methylation. The MIT team found that mice lacking Tet1 had much lower levels of hydroxymethylation — an intermediate step in the removal of methylation — in the hippocampus and the cortex, which are both key to learning and memory.

These changes in demethylation were most dramatic in a group of about 200 genes, including a small subset of so-called “immediate early genes,” which are critical for memory formation. In mice without Tet1, the immediate early genes were very highly methylated, making it difficult for those genes to be turned on.

In the promoter region of an immediate early gene known as Npas4 — which Yingxi Li, the Frederick A. and Carole J. Middleton Career Development Assistant Professor of Neuroscience at MIT, recently showed regulates other immediate early genes — the researchers found methylation levels close to 60 percent, compared to 8 percent in normal mice.

“It’s a huge increase in methylation, and we think that is most likely to explain why Npas4 is so drastically downregulated in the Tet1 knockout mice,” Tsai says.

“By demonstrating some of the ways that regulatory genes are methylated in response to Tet1 knockout and behavioral experience, the authors have taken an important step in identifying potential pharmacological treatment targets for disorders such as PTSD and addiction,” says Matthew Lattal, an associate professor of behavioral neuroscience at Oregon Health and Science University, who was not part of the research team.

How Psychedelics Light Up Brain’s Neuropathways

The researchers also discovered why the Tet1-deficient mice are still able to learn new things. During fear conditioning, methylation of the Npas4 gene goes down to around 20 percent, which appears to be low enough for the expression of Npas4 to turn on and help create new memories. The researchers suspect the fear stimulus is so strong that it activates other demethylation proteins — possibly Tet2 or Tet3 — that can compensate for the lack of Tet1.

During the memory-extinction training, however, the mice do not experience such a strong stimulus, so methylation levels remain high (around 40 percent) and Npas4 does not turn on.

The findings suggest that a threshold level of methylation is necessary for gene expression to take place, and that the job of Tet1 is to maintain low methylation, ensuring that the genes necessary for memory formation are poised and ready to turn on at the moment they are needed.

The researchers are now looking for ways to increase Tet1 levels artificially and studying whether such a boost could enhance memory extinction. They are also studying the effects of eliminating two or all three of the Tet enzymes.

“This will not only help us further delineate epigenetic regulation of memory formation and extinction, but will also unravel other potential functions of Tets and methylation in the brain beyond memory extinction,” Dawlaty says.

Notes about this neurogenetics and memory research

The research was funded by the National Institutes of Health, the Simons Foundation and the Howard Hughes Medical Institute.