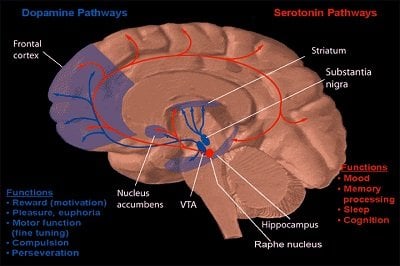 Extroverts may be more outgoing and cheerful in part because of their brain chemistry, reports a study by Cornell neuroscientists.

People’s brains respond differently to rewards, say the neuroscientists. Some people’s brains release more of the neurotransmitter dopamine, which ultimately gives them more reasons to be excited and engaged with the world, says Richard Depue, professor of human development in the College of Human Ecology, who co-authored the study with graduate student Yu Fu.

Their study, published in Frontiers in Human Neuroscience (Vol. 7) in June, sheds new light on how differences in the way the brain responds to reward translate into extraverted behavior, the authors say.

“Rewards like food, sex and social interactions as well as more abstract goals such as money or getting a degree trigger the release of dopamine in the brain, producing positive emotions and feelings of desire that motivate us to work toward obtaining those goals. In extroverts, this dopamine response to rewards is more robust so they experience more frequent activation of strong positive emotions,” Depue says.

“Dopamine also facilitates memory for circumstances that are associated with the reward. Our findings suggest this plays a significant role in sustaining extroverted behavior,” Depue adds. “The extroverts in our study showed greater association of context with reward than introverts, which means that over time, extroverts will acquire a more extensive network of reward-context memories that activate their brain’s reward system.”

Over a week, the researchers engaged 70 young adult males – a mix of introverts and extroverts according to a standard personality test – in a set of laboratory tasks that included viewing brief video clips of several aspects of the lab environment. On the first four days, some participants received a low dose of the stimulant methylphenidate (MP), also known as Ritalin, which triggers the release of dopamine in the brain; the others received either a placebo or MP in a different lab location. The team tested how strongly participants associated contextual cues in the lab (presented in video clips) with reward (the dopamine rush induced by MP) by assessing changes in their working memory, motor speed at a finger-tapping task and positive emotions (all known to be influenced by dopamine).

Participants who had unconsciously associated contextual cues in the lab with the reward were expected to have greater dopamine release/reward system activation on day 4 compared with day 1 when shown the same video clips. This so-called “associative conditioning” response is exactly what the team found in the extroverts. The extroverts strongly associated the lab context with reward feelings, whereas the introverts showed little to no evidence of associative conditioning.

“At a broader level, the study begins to illuminate how individual differences in brain functioning interact with environmental influences to create behavioral variation. This knowledge may someday help us to understand how such interactions create more extreme forms of emotional behavior, such as personality disorders,” says Depue.

Notes about this neuroscience and reward system research

The study, “On the Nature of Extraversion: Variation in Conditioned Contextual Activation of Dopamine-Facilitated Affective, Cognitive and Motor Processes,” was funded in part by the National Institute of Mental Health.

Karene Booker is extension support specialist in the Department of Human Development.

Written by Karene Booker
Contact: Karene Booker – Cornell University
Source: Cornell University press release
Image Source: The dopamine pathway image is credited to the NIH and is in the public domain.
Original Research: Abstract for “On the Nature of Extraversion: Variation in Conditioned Contextual Activation of Dopamine-Facilitated Affective, Cognitive and Motor Processes” by Richard A. Depue and Yu Fu in Frontiers in Human Neuroscience. Published online July 2013 doi: 10.3389/fnhum.2013.00288