A book is made of wood. But it is not a tree. The dead cells have been repurposed to serve another need.

Now a team of scientists has repurposed living cells—scraped from frog embryos—and assembled them into entirely new life-forms. These millimeter-wide “xenobots” can move toward a target, perhaps pick up a payload (like a medicine that needs to be carried to a specific place inside a patient)—and heal themselves after being cut.

“These are novel living machines,” says Joshua Bongard, a computer scientist and robotics expert at the University of Vermont who co-led the new research. “They’re neither a traditional robot nor a known species of animal. It’s a new class of artifact: a living, programmable organism.”

The new creatures were designed on a supercomputer at UVM—and then assembled and tested by biologists at Tufts University. “We can imagine many useful applications of these living robots that other machines can’t do,” says co-leader Michael Levin who directs the Center for Regenerative and Developmental Biology at Tufts, “like searching out nasty compounds or radioactive contamination, gathering microplastic in the oceans, traveling in arteries to scrape out plaque.”

The results of the new research were published January 13 in the Proceedings of the National Academy of Sciences.

People have been manipulating organisms for human benefit since at least the dawn of agriculture, genetic editing is becoming widespread, and a few artificial organisms have been manually assembled in the past few years—copying the body forms of known animals.

But this research, for the first time ever, “designs completely biological machines from the ground up,” the team writes in their new study.

With months of processing time on the Deep Green supercomputer cluster at UVM’s Vermont Advanced Computing Core, the team—including lead author and doctoral student Sam Kriegman—used an evolutionary algorithm to create thousands of candidate designs for the new life-forms. Attempting to achieve a task assigned by the scientists—like locomotion in one direction—the computer would, over and over, reassemble a few hundred simulated cells into myriad forms and body shapes. As the programs ran—driven by basic rules about the biophysics of what single frog skin and cardiac cells can do—the more successful simulated organisms were kept and refined, while failed designs were tossed out. After a hundred independent runs of the algorithm, the most promising designs were selected for testing.

Then the team at Tufts, led by Levin and with key work by microsurgeon Douglas Blackiston—transferred the in silico designs into life. First they gathered stem cells, harvested from the embryos of African frogs, the species Xenopus laevis. (Hence the name “xenobots.”) These were separated into single cells and left to incubate. Then, using tiny forceps and an even tinier electrode, the cells were cut and joined under a microscope into a close approximation of the designs specified by the computer.

Assembled into body forms never seen in nature, the cells began to work together. The skin cells formed a more passive architecture, while the once-random contractions of heart muscle cells were put to work creating ordered forward motion as guided by the computer’s design, and aided by spontaneous self-organizing patterns—allowing the robots to move on their own.

These reconfigurable organisms were shown to be able move in a coherent fashion—and explore their watery environment for days or weeks, powered by embryonic energy stores. Turned over, however, they failed, like beetles flipped on their backs.

Later tests showed that groups of xenobots would move around in circles, pushing pellets into a central location—spontaneously and collectively. Others were built with a hole through the center to reduce drag. In simulated versions of these, the scientists were able to repurpose this hole as a pouch to successfully carry an object. “It’s a step toward using computer-designed organisms for intelligent drug delivery,” says Bongard, a professor in UVM’s Department of Computer Science and Complex Systems Center.

Many technologies are made of steel, concrete or plastic. That can make them strong or flexible. But they also can create ecological and human health problems, like the growing scourge of plastic pollution in the oceans and the toxicity of many synthetic materials and electronics. “The downside of living tissue is that it’s weak and it degrades,” say Bongard. “That’s why we use steel. But organisms have 4.5 billion years of practice at regenerating themselves and going on for decades.” And when they stop working—death—they usually fall apart harmlessly. “These xenobots are fully biodegradable,” say Bongard, “when they’re done with their job after seven days, they’re just dead skin cells.”

Your laptop is a powerful technology. But try cutting it in half. Doesn’t work so well. In the new experiments, the scientists cut the xenobots and watched what happened. “We sliced the robot almost in half and it stitches itself back up and keeps going,” says Bongard. “And this is something you can’t do with typical machines.”

Both Levin and Bongard say the potential of what they’ve been learning about how cells communicate and connect extends deep into both computational science and our understanding of life. “The big question in biology is to understand the algorithms that determine form and function,” says Levin. “The genome encodes proteins, but transformative applications await our discovery of how that hardware enables cells to cooperate toward making functional anatomies under very different conditions.”

To make an organism develop and function, there is a lot of information sharing and cooperation—organic computation—going on in and between cells all the time, not just within neurons. These emergent and geometric properties are shaped by bioelectric, biochemical, and biomechanical processes, “that run on DNA-specified hardware,” Levin says, “and these processes are reconfigurable, enabling novel living forms.”

The scientists see the work presented in their new PNAS study—”A scalable pipeline for designing reconfigurable organisms,”—as one step in applying insights about this bioelectric code to both biology and computer science. “What actually determines the anatomy towards which cells cooperate?” Levin asks. “You look at the cells we’ve been building our xenobots with, and, genomically, they’re frogs. It’s 100% frog DNA—but these are not frogs. Then you ask, well, what else are these cells capable of building?”

“As we’ve shown, these frog cells can be coaxed to make interesting living forms that are completely different from what their default anatomy would be,” says Levin. He and the other scientists in the UVM and Tufts team—with support from DARPA’s Lifelong Learning Machines program and the National Science Foundation—believe that building the xenobots is a small step toward cracking what he calls the “morphogenetic code,” providing a deeper view of the overall way organisms are organized—and how they compute and store information based on their histories and environment.

Many people worry about the implications of rapid technological change and complex biological manipulations. “That fear is not unreasonable,” Levin says. “When we start to mess around with complex systems that we don’t understand, we’re going to get unintended consequences.” A lot of complex systems, like an ant colony, begin with a simple unit—an ant—from which it would be impossible to predict the shape of their colony or how they can build bridges over water with their interlinked bodies. 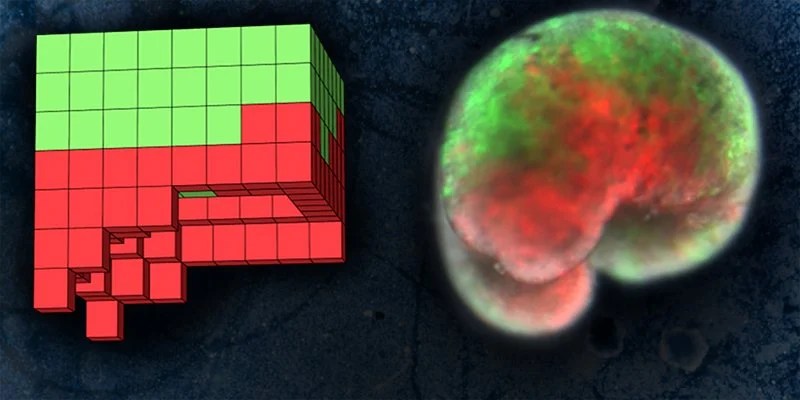 On the left, the anatomical blueprint for a computer-designed organism, discovered on a UVM supercomputer. On the right, the living organism, built entirely from frog skin (green) and heart muscle (red) cells. The background displays traces carved by a swarm of these new-to-nature organisms as they move through a field of particulate matter. Image is credited to Sam Kriegman, UVM.

“If humanity is going to survive into the future, we need to better understand how complex properties, somehow, emerge from simple rules,” says Levin. Much of science is focused on “controlling the low-level rules. We also need to understand the high-level rules,” he says. “If you wanted an anthill with two chimneys instead of one, how do you modify the ants? We’d have no idea.”

“I think it’s an absolute necessity for society going forward to get a better handle on systems where the outcome is very complex,” Levin says. “A first step towards doing that is to explore: how do living systems decide what an overall behavior should be and how do we manipulate the pieces to get the behaviors we want?”

In other words, “this study is a direct contribution to getting a handle on what people are afraid of, which is unintended consequences,” Levin says—whether in the rapid arrival of self-driving cars, changing gene drives to wipe out whole lineages of viruses, or the many other complex and autonomous systems that will increasingly shape the human experience.

“There’s all of this innate creativity in life,” says UVM’s Josh Bongard. “We want to understand that more deeply—and how we can direct and push it toward new forms.”

About this robotics research article

Living systems are more robust, diverse, complex, and supportive of human life than any technology yet created. However, our ability to create novel lifeforms is currently limited to varying existing organisms or bioengineering organoids in vitro. Here we show a scalable pipeline for creating functional novel lifeforms: AI methods automatically design diverse candidate lifeforms in silico to perform some desired function, and transferable designs are then created using a cell-based construction toolkit to realize living systems with the predicted behaviors. Although some steps in this pipeline still require manual intervention, complete automation in future would pave the way to designing and deploying unique, bespoke living systems for a wide range of functions.