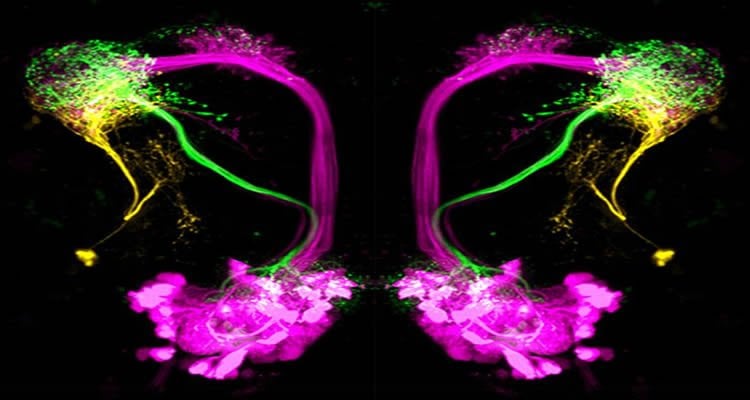 How the Brain Can Distinguish Good from Bad Smells

Scientists identify the lateral horn in the brain of fruit flies as the processing center for behaviorally relevant odor information.

Whether an odor is pleasant or disgusting to an organism is not just a matter of taste. Often, an organism’s survival depends on its ability to make just such a discrimination, because odors can provide important information about food sources, oviposition sites or suitable mates. However, odor sources can also be signs of lethal hazards. Scientists from the BMBF Research Group Olfactory Coding at the Max Planck Institute for Chemical Ecology in Jena, Germany, have now found that in fruit flies, the quality and intensity of odors can be mapped in the so-called lateral horn. They have created a spatial map of this part of the olfactory processing system in the fly brain and showed that the lateral horn can be segregated into three activity domains, each of which represents an odor category. The categories are good versus bad, as well as weak versus strong smells. These categorizations have a direct impact on the behavior of the flies, suggesting that the function of the lateral horn is similar to that of the amygdala in the brains of vertebrates. The amygdala plays a crucial role in the evaluation of sensory impressions and dangers and the lateral horn may also.

In order to survive, organisms must be able to sense information in their environment and to adapt their behavior accordingly. Animals use their senses, such as vision and olfaction, to perceive visual cues or odors in their surroundings and to process and evaluate the information that is sent via these senses to their brains. They must be able to tell good from bad odors. Good odors are important signals when animals search for food or a mating partner. Female insects also use olfactory signals to select a good oviposition place. Bad smells, on the other hand, can signal danger, for example, rotten and toxic food.

Modern functional imaging methods show that these sensory perceptions cause certain response patterns in the brain: Depending on the processed information, specific brain areas are activated. If an odor is rated as pleasant or disgusting, this classification method is called “hedonic valence.” Studies of fruit flies revealed that odor features which could be characterized according to the scales of hedonic valence and odor intensity excited activity in a higher region of the brain, namely, the lateral horn. Depending on whether an odor was categorized as good or bad, strong or weak, brain activity could be made visible in spatially segregated regions of the lateral horn.

“We were very surprised to find that the lateral horn, which is a brain region as big as the antennal lobe (i.e. the olfactory bulb of insects), can be segregated into only three activity domains, while the antennal lobe consists of about 50 functional units,” Silke Sachse, head of the BMBF Research Group, summarized. “Our results show that the higher brain is representing categories of odors, i.e. good versus bad odors, rather than the identity of an odor, which is represented at a lower processing stage such as the antenna and the antennal lobe.”

Like many other sensory networks, the olfactory circuit of the fly contains spatially distinct pathways to the higher brain consisting of excitatory and inhibitory projection neurons. Projection neurons are nerve cells that transmit sensory signals to other regions of the nervous system. Notably, the inhibitory projections, which were examined in this study, convey olfactory information from the antennal lobe, the first processing center, to the lateral horn exclusively and bypass the mushroom body, which is the center for learning and memory. The inhibitory projection neurons can be subdivided into two morphological groups: the first subset processes information about whether an odor is attractive or repulsive, and the second subset processes information about the intensity of an odor. To test the functionality of these neurons, the scientists worked with flies in which these neurons had been silenced.

“Interestingly, we observed that the flies did not show attraction to any odor anymore but suddenly avoided highly attractive odors such as e.g. balsamic vinegar. We therefore concluded that the inhibitory projection neurons mediate attraction to odors and therefore enable a fly to find its food source or oviposition site,” Silke Sachse explains. Moreover, the scientists were able to identify higher-order neurons in the lateral horn, that is, neurons that exclusively represent repulsive odors. These neurons communicate with inhibitory projection neurons via synapses.

The researchers believe that the function of the lateral horn in fruit flies can be compared to that of the amygdala − two almond-shaped nuclei − in the brain of vertebrates. In humans, the amygdala plays a primary role in the emotional evaluation of situations and the assessment of risks. If the amygdala is damaged, humans fail to show fear or aggression. However, lesions in the amygdala also prevent vital flight or defense reactions from being triggered. The scientists hypothesize that damage to the lateral horn may have similar effects on fruit flies. However, this assumption is so far speculative because the lateral horn could not be selectively inactivated.

In their study, the Max Planck researchers identified the lateral horn as the processing center for odor information that triggers innate odor-guided behavior. Good and bad odors are spatially decoded in different regions of the lateral horn. Further experiments will be needed to find out how this spatial map is finally transformed into the insect’s decision to act. The scientists are currently in the process of identifying higher-order neurons in the lateral horn to complete the olfactory circuitry from the periphery up to the brain centers where the decision is taking place that leads to purposive odor-guided behavior.

About this olfaction research

Decoding odor quality and intensity in the Drosophila brain

To internally reflect the sensory environment, animals create neural maps encoding the external stimulus space. From that primary neural code relevant information has to be extracted for accurate navigation. We analyzed how different odor features such as hedonic valence and intensity are functionally integrated in the lateral horn (LH) of the vinegar fly, Drosophila melanogaster. We characterized an olfactory-processing pathway, comprised of inhibitory projection neurons (iPNs) that target the LH exclusively, at morphological, functional and behavioral levels. We demonstrate that iPNs are subdivided into two morphological groups encoding positive hedonic valence or intensity information and conveying these features into separate domains in the LH. Silencing iPNs severely diminished flies’ attraction behavior. Moreover, functional imaging disclosed a LH region tuned to repulsive odors comprised exclusively of third-order neurons. We provide evidence for a feature-based map in the LH, and elucidate its role as the center for integrating behaviorally relevant olfactory information.