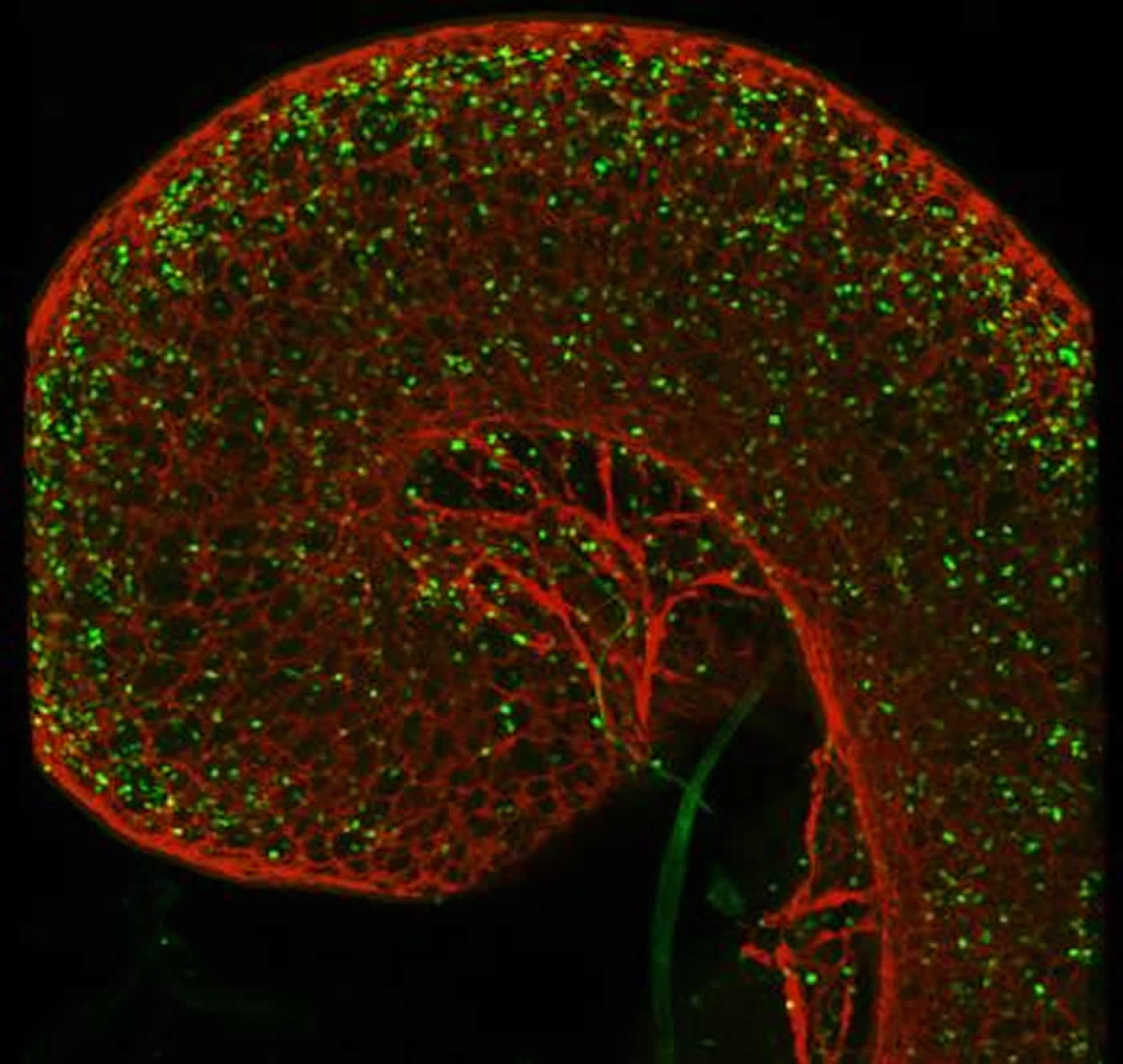 Summary: Researchers have identified neurons in the mucosal tissue that detect infection and hasten the response of immune cells.

Source: Champalimaud Centre for the Unknown.

Scientists at the Champalimaud Centre for the Unknown and the Instituto de Medicina Molecular, in Lisbon, Portugal, have discovered that neurons located at mucosal tissues can immediately detect an infection in the organism, promptly producing a substance that acts as an “adrenaline rush” for immune cells. Under the effect of this signal, immune cells rapidly become poised to fight the infection and repair the damage caused to surrounding tissues. These totally novel results have been published online in the journal Nature on September 6, 2017.

Most neurons in the body are located in the brain and its vicinity – the central nervous system -, with neurons projecting their axons to every tissue in the organism by way of the spinal cord. In turn, glial cells are neuron satellites ensuring the cohesion of the nervous tissue. Nevertheless, throughout the body there is a very abundant number of peripheral nervous cells. These are so numerous in the gut that they have collectively been dubbed “the second brain”.

What do these peripheral nervous cells do? Experts are just beginning to understand that they are in fact extremely important for the organism to be able to mount adequate immune responses and preserve health.

In 2016, Henrique Veiga-Fernandes and his colleagues (then at the Institute for Molecular Medicine, in Lisbon) published, also in Nature, a study where they showed that glial cells in the gut can stimulate a type of immune cells, called ILC3, to produce substances against bacterial infections.

These immune cells that are being studied by Veiga-Fernandes – collectively called “innate lymphoid cells”, or ILC -, are also very special. We are born with them; they are not produced in response to an immunization, for instance through vaccination. “ILCs were discovered very recently, in 2010, but they are very ancient in evolutionary terms. Even lampreys have them!”, says Veiga-Fernandes. Lampreys belong to a very old animal lineage.

There are several types of these innate lymphocytes (white cells). In their 2016 study, the team had analyzed the behavior of ILC3s in the gut – and their “dialog” with their glial cell neighbours. In the new study, also led by Veiga-Fernandes, they focused on another type of innate lymphoid cells: ILC2s.

ILC2s produce substances that are essential to immune responses against parasites, such as worms. “These cells are normally abundant at barrier sites, such as the gut, lungs and skin”, which serve as physical forteresses to the body”, Veiga-Fernandes explains.

Now, the team showed that these immune cells would not be able to develop their protective actions against infections without establishing a “dialog” with neurons residing at those sites.

The study brings “two big novelties”, says Veiga-Fernandes. The first, he explains, “is that neurons define the immune cells’ function. Nobody could have imagined that the nervous system coordinates, commands and controls the immune response throughout the whole organism.” Second, he adds, “it’s one of the fastest and most powerful immune reactions we have ever seen”. Comparatively, the newly discovered neuronal stimulus induces an immune response in a few minutes, while the immune response following vaccination typically takes several weeks to mount.

How did the scientists discover this neuro-immune “tandem”? “What happened was that we observed, in high-resolution microphotographs of the lungs and gut of mice, that ILC2s were placed along the axons of neurons residing in these mucosa, a bit like pearls on a string”, replies Veiga-Fernandes. “So we asked ourselves if these two distinct tissues could productively ‘talk’ to each other.”

To test this hypothesis, the team started by analyzing the whole genome of a series of immune cells – ILC1s, ILC2s, ILC3s, T-cells, etc. -, “searching for genes that code molecules that may act as receivers of neuronal signals”, says Veiga-Fernandes. They found that only ILC2s possessed a defined “receptor” (membrane molecules that act as antennae) for nervous signals. 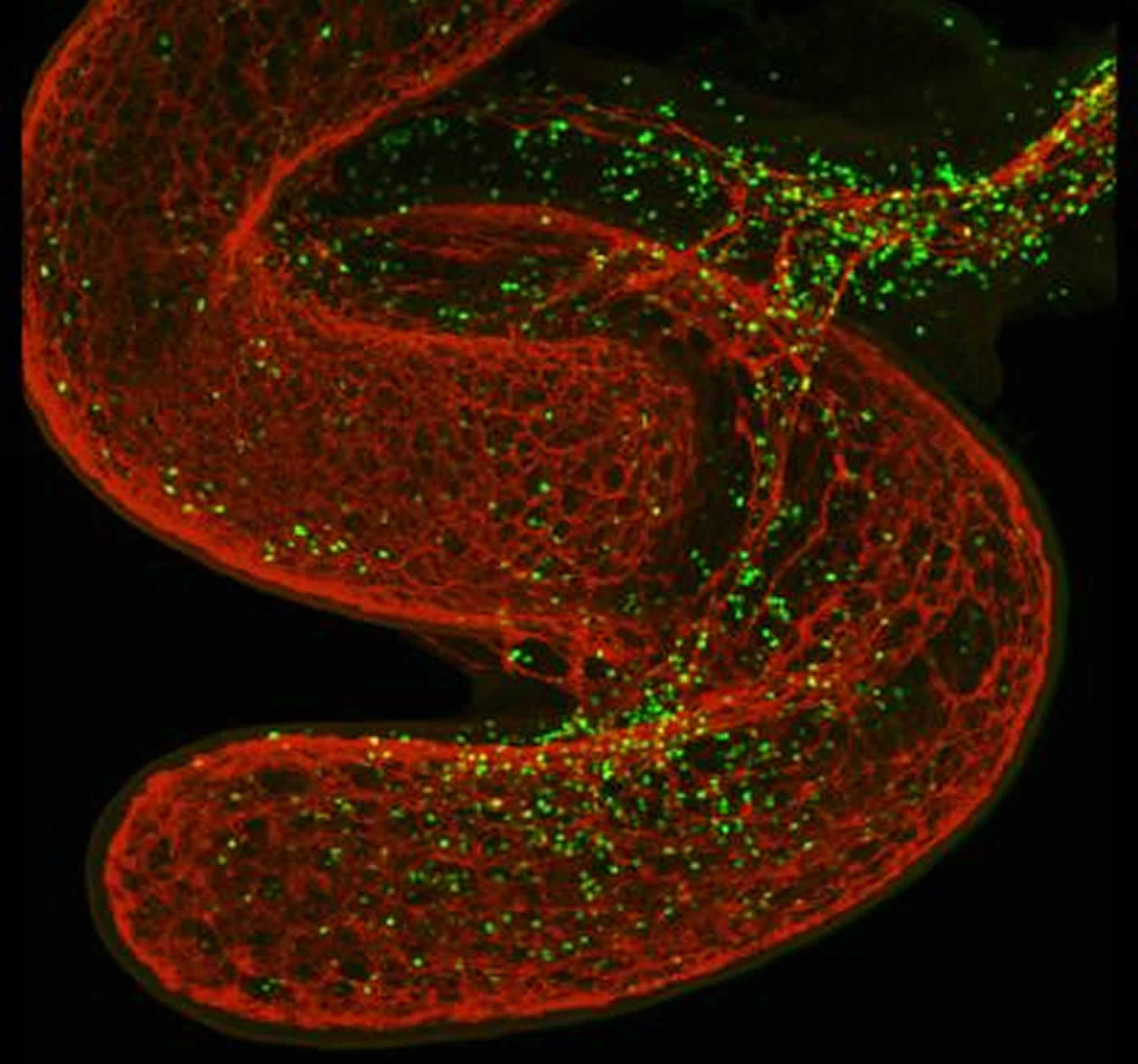 Innate lymphocytes (in green) surround the gut (in red). NeuroscienceNews.com image is credited to Henrique Veiga-Fernandes.

Notably, the authors discovered that ILC2s have receptors to a neuronal messenger called neuromedin U (NMU). Since neurons are the only cells that produce abundant levels of NMU, this indicated that only neurons could be sending this signal to ILC2s.

Later, they used a rodent parasite, Nippostrongylus brasiliensis (a sort of hookworm) to infect “normal” control mice and mutant mice whose ILC2s had been stripped of their NMU receptors. In the first group of animals, the innate immune cells immediately triggered a response to neutralize the parasite and repair damaged tissue. In the second group, the mice were unable to fight the infection and the damage caused by the parasite – including the internal bleeding of the lungs due to N. brasiliensis.

The researchers also showed that neurons are able to detect the products secreted by parasites that infect the organism – and that, when this happens, they rapidly produce NMU. In turn, NMU acts vigorously on ILC2s, thus generating a protective response in a few minutes.

Could these results be extrapolated to humans? “Maybe. In humans, ILC2s also have NMU receptors”, replies Veiga-Fernandes. “But we are still very far from understanding how we could safely use this neuro-immunological ‘bomb’; for now, we are at the fundamental research level”, he adds.

Neuronal regulation of type 2 innate lymphoid cells via neuromedin U