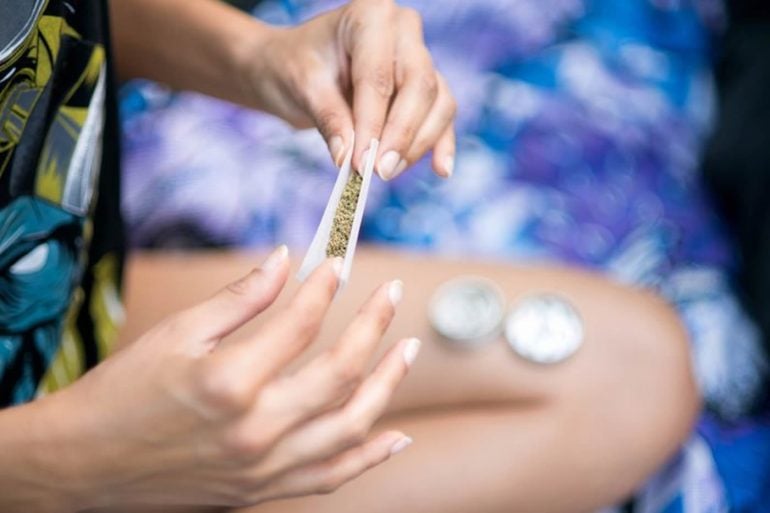 A study of more than 3,800 high school students in the Greater Montreal area reveals that cannabis use has a greater impact on working memory in girls than in boys. Image is credited to University of Montreal.

Summary: High school aged girls who use marijuana experience a greater impact on their working memory and academic success than their male peers.

Early use of cannabis affects the working memory of adolescents, but its deleterious effect is more pronounced in girls, posing a risk to their academic success as well as to their memory when they reach adulthood.

These are the findings of a study conducted by Sima Noorbakhsh of the CHU Sainte-Justine Research Centre, under the direction of Professor Patricia Conrod of the Department of Psychiatry and Addictology of Université de Montréal.

This work is the subject of a scientific article published in early April in the journal Frontiers in Human Neuroscience.

Done in collaboration with the management and teaching staff of 31 high schools in the Greater Montreal area, the research project consisted of using surveys and various neuropsychological tests to evaluate the impact of cannabis and alcohol use on the memory and cognitive performance of 3,826 students.

“Their responses, obtained on an annual basis, were collected over a five-year period, allowing the researchers to follow a cohort of students from the beginning to the end of their high school studies,” Conrod said.

In addition to surveys to determine the evolution of drug use among young people, neuropsychological tests were used to measure their working memory, recall memory, perceptual reasoning and inhibitory control.

Overall, the surveys showed a gradual increase in alcohol and marijuana use from Grades 1 to 5 among both boys and girls.

The neuropsychological tests showed that alcohol consumption is not associated with a significant reduction in cognitive and mnemonic performance, however this is not the case for cannabis use.

Indeed, the results revealed a decrease in performance in both boys and girls during the tests as well as a more damaging effect on working memory among those who used cannabis early, at the start of high school.

What accounts for this difference?

“Working memory, which involves the ability to process and store information over a short period of time, is related to the prefrontal cortex,” replied Conrod. “This is the last region of the brain to develop in adolescents, but this development occurs earlier in girls than in boys.”

“Several studies have shown that early marijuana use affects the maturation of the prefrontal cortex, and our results corroborate them: girls who report using cannabis in early adolescence show a deficit in working memory by the end of high school compared to girls who used later.”

The study also reveals that there is a gender difference in the negative consequences of early cannabis use on brain development and, in particular, on the area related to working memory.

Data collected by Noorbakhsh and Conrod also show that by the time they reached Grade 5 – that is, before adulthood – “almost 80 percent of the participants reported having used cannabis,” the researchers write.

“More than 10 per cent of Canadian teenage girls aged 15 and older had used marijuana in the past year, according to Statistics Canada’s 2018 data, and we know that students who smoke cannabis are 2.3 times more likely to drop out of school than those who do not,” said Conrod.

As well, there is evidence that regular cannabis use has long-term effects on attention span and memory, as well as on academic performance, she added.

“Although the law prohibiting marijuana use before the ages of 18 to 21 in Quebec is a good thing, it does not change teenagers’ behaviour,” she said.

“We need to better prevent its early use through strategies that will engage parents, schools and public health departments, through interventions that will target and reach young people, because their long-term mental health is at stake.”

Cognitive Function Impairments Linked to Alcohol and Cannabis Use During Adolescence: A Study of Gender Differences

Major neurocognitive changes occur during adolescence, making this phase one of the most critical developmental periods of life. Furthermore, this phase in life is also the time in which youth substance use begins. Several studies have demonstrated the differential associations of alcohol and cannabis use concerning the neurocognitive functioning of both males and females. Past and contemporary literature on gender-specific effects in neuroscience of addiction is predominantly based on cross-sectional datasets and data that is limited in terms of measurement variability. Given the importance of gender-specific effects in addiction studies, and in order to address the two above-mentioned gaps in the literature, the present study aimed to compare neurocognitive functioning of male and female adolescents in the context of cannabis and alcohol use, while employing a longitudinal design with multiple repeated measurements. Participants were 3,826 high school students (47% female; mean age, 12.7), who were recruited from 31 high schools in the greater Montreal area. Participants were requested to complete annual surveys for five consecutive years, from 7th to 11th grade, assessing their alcohol/cannabis use and neurocognitive functioning (working memory, delayed recall memory, perceptual reasoning, and inhibition control). The analytical strategy focused on the longitudinal association between each predictor (female, male) and each of the outcomes (domains of neurocognitive functioning). Multilevel linear models assessed the association of alcohol and cannabis consumption and the four domains of neurocognitive functioning. Results revealed a gender by within-subject interaction, suggesting a weaker effect of yearly fluctuation of cannabis use on working memory among males compared to females. Our findings suggest a different pattern of neurocognitive impairment of female and male working memory after using cannabis over the course of adolescence. Early initiation of cannabis use potentially results in more spatial working memory deficits in female adolescents. This may negatively influence young females’ capacity in academic settings and lead to significant impairment in adulthood, which critically decreases the individual’s quality of life.