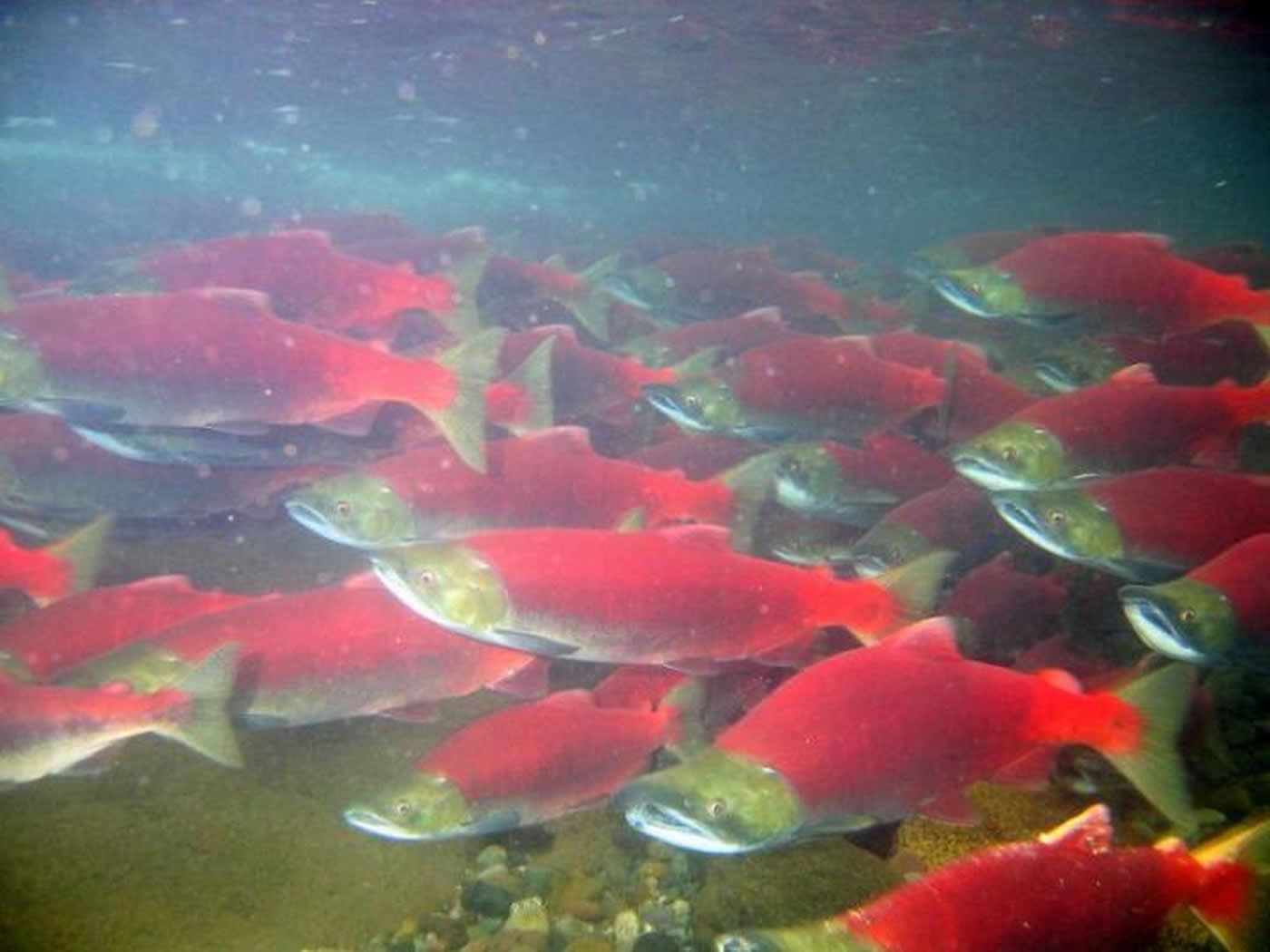 Salmon and other freshwater fish and amphibians supercharge their ability to see red and infrared light. Scientists at Washington University School of Medicine in St. Louis have shown that this evolutionary adaptation hinges on the activity of an enzyme that converts vitamin A1 to vitamin A2, enabling the aquatic creatures to more easily navigate murky waters. Credit: National Park Service.

Salmon migrating from the open ocean to inland waters do more than swim upstream. To navigate the murkier freshwater streams and reach a spot to spawn, the fish have evolved a means to enhance their ability to see infrared light. Humans lack this evolutionary adaptation.

For nearly a century, scientists have puzzled over how salmon as well as other freshwater fish and amphibians, including frogs, easily shift their vision from marine or terrestrial environments – where the light environment is blue-green – to the waters of inland steams. In such streams, mud, algae and other particles filter out light from the blue end of the visual spectrum, creating a light environment that shifts to the red and infrared end of the spectrum.

Now, scientists at Washington University School of Medicine in St. Louis report in the journal Current Biology that they have solved the mystery.

“We’ve discovered an enzyme that switches the visual systems of some fish and amphibians and supercharges their ability to see infrared light,” said senior author Joseph Corbo, MD, PhD, associate professor of pathology and immunology. “For example, when salmon migrate from the ocean to inland streams, they turn on this enzyme, activating a chemical reaction that shifts the visual system, helping the fish peer more deeply into murky water.”

As it turns out, the enzyme – called Cyp27c1 – is closely linked to vitamin A, long known to promote good vision, especially in low light. The enzyme converts vitamin A1 to vitamin A2; the latter has remarkable properties to enhance the ability to see longer wavelength light such as red and infrared light.

The findings could lead to advances in biomedical research, particularly in optogenetics, a hot, new field in which light is used to control the firing of neurons in the brain. Optogenetic applications currently are limited to visible light, which penetrates only the top layer of neural tissue.

But if scientists are able to incorporate the newly discovered enzyme, they may be able to activate photosensitive neurons with infrared light, which penetrates much deeper. “Just as the enzyme helps fish peer into murky water, it could help us peer deeper into the brain,” said Corbo.

Corbo and his team made the enzyme discovery in zebrafish – tiny, transparent freshwater fish that remain a staple of laboratory research. They confirmed their findings in bullfrogs, whose eyes are uniquely designed for the light environments of both air and freshwater.

Bullfrogs sit with their eyes at the water’s surface so that they can look up into the air and down into the water at the same time. The researchers found vitamin A2 and the enzyme Cyp27c1 right where they expected: in the upper half of the bullfrog’s eyes that peer down into the water, but not in the lower half which looks upward into the air.

Furthermore, the scientists showed that zebrafish with normal copies of the cyp27c1 gene move toward infrared light shined into a dark aquarium. But fish with disabled cyp27c1 genes continue to behave like they are in the dark, whether or not the infrared light is on.

Humans have a form of the same gene, but it is not turned on in the eye. Thus, people are not able enhance their infrared vision in the same way fish can. To do so, they must wear night-vision goggles. “We don’t know yet how this enzyme is utilized in the human body,” Corbo said.

“But just because our eyes don’t make vitamin A2 doesn’t mean we can’t use it,” he said. Research on medical students in the 1940s showed that people who consume vitamin A2 have an enhanced ability to detect red and infrared light. In 2013, a group of “biohackers” successfully crowdfunded an experiment to try to extend their vision into the near-infrared spectrum by eating a diet supplemented with vitamin A2.

“I wouldn’t necessarily recommend following their dietary advice, but the concept is sound,” Corbo said.

Summary
Some vertebrate species have evolved means of extending their visual sensitivity beyond the range of human vision. One mechanism of enhancing sensitivity to long-wavelength light is to replace the 11-cis retinal chromophore in photopigments with 11-cis 3,4-didehydroretinal. Despite over a century of research on this topic, the enzymatic basis of this perceptual switch remains unknown. Here, we show that a cytochrome P450 family member, Cyp27c1, mediates this switch by converting vitamin A1 (the precursor of 11-cis retinal) into vitamin A2 (the precursor of 11-cis 3,4-didehydroretinal). Knockout of cyp27c1 in zebrafish abrogates production of vitamin A2, eliminating the animal’s ability to red-shift its photoreceptor spectral sensitivity and reducing its ability to see and respond to near-infrared light. Thus, the expression of a single enzyme mediates dynamic spectral tuning of the entire visual system by controlling the balance of vitamin A1 and A2 in the eye.