Eating Fish May Protect Brain From Effects of Air Pollution 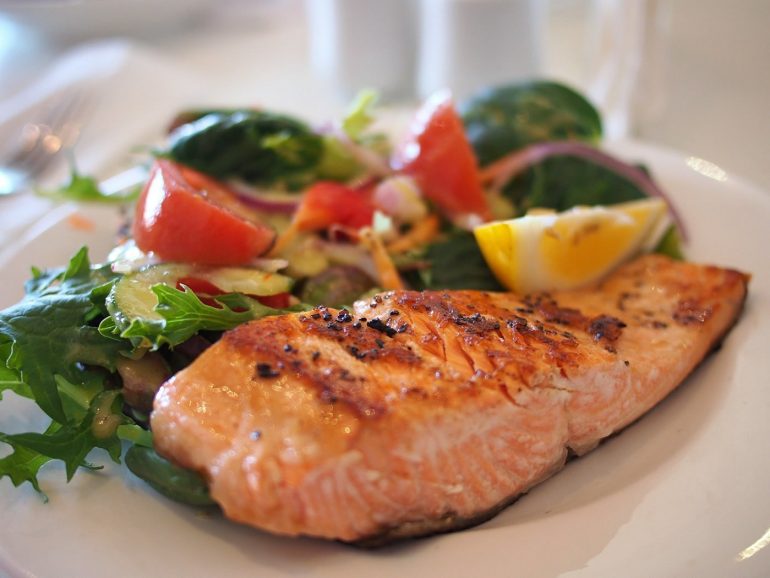 Women with the highest levels of omega-3 fatty acids in the blood also had greater volumes of the hippocampus. Image is in the public domain.

Older women who eat more than one to two servings a week of baked or broiled fish or shellfish may consume enough omega-3 fatty acids to counteract the effects of air pollution on the brain, according to a new study published in the July 15, 2020 edition of Neurology.

Researchers found that among older women who lived in areas with high levels of air pollution, those who had the lowest levels of omega-3 fatty acids in their blood had more brain shrinkage than women who had the highest levels.

The study involved 1,315 women with an average age of 70 who did not have dementia at the start of the study. The women completed questionnaires about diet, physical activity, and medical history.

Researchers used the women’s home addresses to determine their three-year average exposure to air pollution. Participants then had brain scans with magnetic resonance imaging (MRI) to measure various areas of the brain including white matter, which is composed of nerve fibers that send signals throughout the brain, and the hippocampus, the part of the brain associated with memory.

After adjusting for age, education, smoking and other factors that could affect brain shrinkage, researchers found that women who had the highest levels of omega-3 fatty acids in the blood had greater volumes of white matter than those with the lowest levels. Those in the highest group had 410 cubic centimeters (cm3) white matter, compared to 403 cm3 for those in the lowest group. The researchers found that for each quartile increase in air pollution levels, the average white matter volume was 11.52 cm3 smaller among people with lower levels of omega-3 fatty acids and 0.12 cm3 smaller among those with higher levels.

Women with the highest levels of omega-3 fatty acids in the blood also had greater volumes of the hippocampus.

“Our findings suggest that higher levels of omega-3 fatty acids in the blood from fish consumption may preserve brain volume as women age and possibly protect against the potential toxic effects of air pollution,” said He. “It’s important to note that our study only found an association between brain volume and eating fish. It does not prove that eating fish preserves brain volume. And since separate studies have found some species of fish may contain environmental toxins, it’s important to talk to a doctor about what types of fish to eat before adding more fish to your diet.”

A limitation of the study was that most participants were older white women, so the results cannot be generalized to others. Also, researchers were only able to examine exposures to later-life air pollution, not early or mid-life exposures, so future studies should look at exposures to air pollution across a person’s lifespan.

Funding: The study was funded by the National Institutes of Health.

Methods: A total of 1,315 women (aged 65 to 80 years) free of dementia were enrolled in an observational study between 1996-9 and underwent structural brain MRI in 2005-6. Based on prospectively collected and geocoded participant addresses, we used a spatiotemporal model to estimate the 3-year average PM2.5 exposure before the MRI. We examined the joint associations of baseline LCn3PUFAs in red blood cells (RBCs) and PM2.5 exposure with brain volumes in generalized linear models.

Results: After adjustment for potential confounders, participants with higher levels of RBC LCn3PUFA had significantly greater volumes of white matter and hippocampus. For each inter-quartile increment (2.02%) in omega-3 index, the average volume was 5.03 cm3 (P<0.01) greater in the white matter, and 0.08 cm3 (P=0.03) greater in the hippocampus. The associations with RBC DHA and EPA levels were similar. Higher LCn3PUFA attenuated the inverse associations between PM2.5 exposure and white matter volumes in the total brain and multi-modal association areas (frontal, parietal, and temporal; all P for interaction <0.05), while the associations with other brain regions were not modified. Consistent results were found for dietary intakes LCn3PUFAs and non-fried fish.

Conclusions: Findings from this prospective cohort study among elderly women suggest that the benefits of LCn3PUFAs on brain aging may include the protection against potential adverse effects of air pollution on white matter volumes.