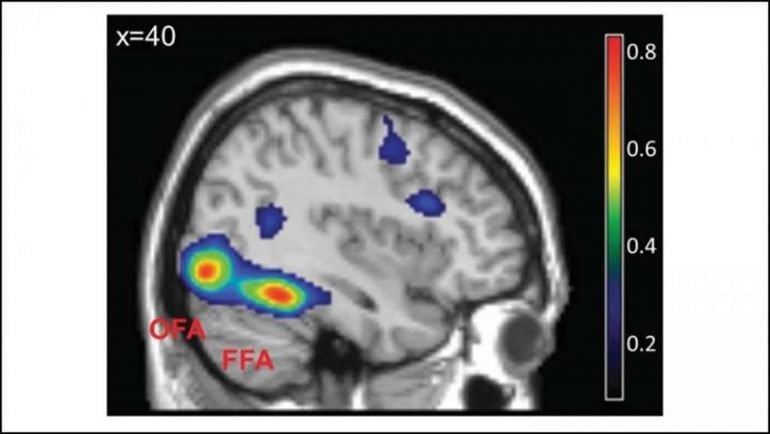 The fusiform facial area, the brain region that responds to faces. Image is credited to Reggev et al., eNeuro 2020.

Summary: A new study reports difficulty in telling members of an “outgroup” apart is linked to visual processing.

A quirk in how the brain processes faces makes it harder to tell members of a racial outgroup apart, according to new research published in eNeuro.

People struggle to differentiate between members of social outgroups, including different races. This can have dire consequences, like when white people misidentify a black perpetrator in a police lineup.

Reggev et al. investigated what happens in the brain’s visual processing system to cause this discrepancy. The research team showed white adults a series of faces of the same race and gender. The participants indicated if they saw the same face twice in a row, or two different faces. The participants could identify two white faces as different more quickly than two black faces.

The scientists then looked at the activity of the fusiform facial area using functional magnetic resonance imaging. Seeing the same face twice in a row suppresses neural activity in this brain region. The suppression lifted when participants saw a new face –but only for white faces. In fact, with new black faces, the suppression resembled seeing the same face twice in a row. This attribute of visual processing explains the difficulty people experience distinguishing between members of an outgroup. These findings may result from life-long exposure to ingroup faces or from different motivation to process such faces.

Original Research: The findings will appear in eNeuro.