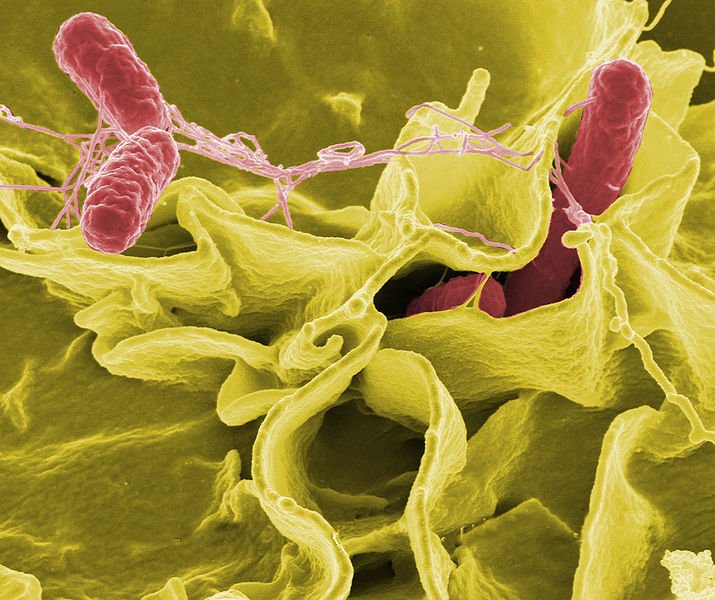 In tests on mice infected with salmonella, the researchers noted that circadian-controlled genes govern the immune response to the invading pathogen, leading to day-night differences in infection potential and in the immune system’s ability to deal with pathogens. The image is a color-enhanced scanning electron micrograph showing Salmonella typhimurium (red) invading cultured human cells. Credited to NIH.
Home
Featured

This suggests that targeted treatments may be particularly effective for pathogens such as salmonella that prompt a strong immune system response governed by circadian genes. It also helps explain why disruptions in the regular day-night pattern – as experienced by, say, night-shift workers or frequent fliers – may raise susceptibility to infectious diseases.

UC Irvine’s Paolo Sassone-Corsi, one of the world’s leading researchers on circadian rhythm genetics, and microbiologist Manuela Raffatellu led the study, which appears this week in the early online edition of Proceedings of the National Academy of Sciences. Marina Bellet, a postdoctoral researcher from Italy’s University of Perugia also played a key role in the experiments.

“Although many immune responses are known to follow daily oscillations, the role of the circadian clock in the immune response to acute infections has not been understood,” said Sassone-Corsi, the Donald Bren Professor of Biological Chemistry. “What we’re learning is that the intrinsic power of the body clock can help fight infections.”

Circadian rhythms of 24 hours govern fundamental physiological functions in almost all organisms. The circadian clock is an intrinsic time-tracking system in the human body that anticipates environmental changes and adapts to the appropriate time of day. Disruption of these normal rhythms can profoundly influence people’s health.

Up to 15 percent of human genes are regulated by the day-night pattern of circadian rhythms, including those that respond to intestinal infections.

In tests on mice infected with salmonella, the researchers noted that circadian-controlled genes govern the immune response to the invading pathogen, leading to day-night differences in infection potential and in the immune system’s ability to deal with pathogens.

Mice are nocturnal, with circadian rhythms opposite those of humans. While important differences exist in the immune response of mice and humans, Sassone-Corsi said, these test results could provide clues to how circadian-controlled intestinal genes regulate daily changes in the effectiveness of the human immune system.

“Salmonella is a good pathogen to study what happens during infection,” said Raffatellu, assistant professor of microbiology & molecular genetics. “We think these findings may be broadly applicable to other infectious diseases in the gut, and possibly in other organs controlled by circadian patterns.”

Sassone-Corsi added that it’s important to understand the circadian genetics regulating immunity. “This gives us the ability to target treatments that supplement the power of the body clock to boost immune response,” he said.

Bellet, Grimaldi and Sahar are affiliated with UC Irvine’s Center for Epigentics & Metabolism, which is directed by Sassone-Corsi.