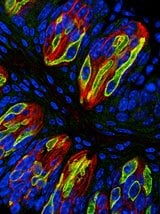 Taste buds in a circumvallate papilla in a mouse tongue with types I, II and III taste cells visualized by cell-type-specific fluorescent antibodies. Type II cells respond to sweet, bitter, and umami tastes by signaling to the central nervous system by non-vesicular ATP release. Taruno and colleagues have identified CALHM1 as a voltage-gated ATP release channel that mediates this response to these taste modalities. Credited to Aki Taruno, Perelman School of Medicine, University of Pennsylvania
Home
Featured

Saying that the sense of taste is complicated is an understatement, that it is little understood, even more so. Exactly how cells transmit taste information to the brain for three out of the five primary taste types was pretty much a mystery, until now.

A team of investigators from nine institutions discovered how ATP, the body’s main fuel source, is released as the neurotransmitter from sweet, bitter, and umami, or savory, taste bud cells. The CALHM1 channel protein, which spans a taste bud cell’s outer membrane to allow ions and molecules in and out, releases ATP to make a neural taste connection. The other two taste types, sour and salt, use different mechanisms to send taste information to the brain.

Kevin Foskett, PhD, professor of Physiology at the Perelman School of Medicine, University of Pennsylvania, and colleagues from the Monell Chemical Senses Center, the Feinstein Institute for Medical Research, and others, describe in Nature how ATP release is key to this sensory information path. They found that the calcium homeostasis modulator 1 (CALHM1) protein, recently identified by the Foskett lab as a novel ion channel, is indispensable for taste via release of ATP.

“This is an example of a bona fide ATP ion channel with a clear physiological function,” says Foskett. “Now we can connect the molecular dots of sweet and other tastes to the brain.”

Taste buds have specialized cells that express G-protein coupled receptors (GPCRs) that bind to taste molecules and initiate a complex chain of molecular events, the final step of which Foskett and collaborators show is the opening of a pore in the cell membrane formed by CALHM1. ATP molecules leave the cell through this pore to alert nearby neurons to continue the signal to the taste centers of the brain. CALHM1 is expressed specifically in sweet, bitter, and umami taste bud cells.

Mice in which CALHM1 proteins are absent, developed by Feinstein’s Philippe Marambaud, PhD, have severely impaired perceptions of sweet, bitter and umami compounds; whereas, their recognition of sour and salty tastes remains mostly normal. The CALHM1 deficiency affects taste perception without interfering with taste cell development or overall function.

Using the CALHM1 knockout mice, team members from Monell and Feinstein tested how their taste was affected. “The mice are very unusual,” says Monell’s Michael Tordoff, PhD. “Control mice, like humans, lick avidly for sucrose and other sweeteners, and avoid bitter compounds. However, the mice without CALHM1 treat sweeteners and bitter compounds as if they were water. They can’t taste them at all.”

From all lines of evidence, the team concluded that CALHM1 is an ATP-release channel required for sweet, bitter, and umami taste perception. In addition, they found that CALHM1 was also required for “nontraditional” Polycose, calcium, and aversive high-salt tastes, implying that the deficit displayed in the knockout animals might best be considered as a loss of all GPCR-mediated taste signals rather than simply sweet, bitter and umami taste.

Interestingly, CALHM1 was originally implicated in Alzheimer’s disease, although the link is now less clear. In 2008, co-author Marambaud identified CALHM1 as a risk gene for Alzheimer’s. They discovered that a CALHM1 genetic variant was more common among people with Alzheimer’s and they went on to show that it leads to a partial loss of function. They also found that this novel ion channel is strongly expressed in the hippocampus, a brain region necessary for learning and memory. So far, there is no connection between taste perception and Alzheimer’s risk, but Marambaud suspects that scientists will start testing this hypothesis.

Notes about this neuroscience and taste research