Breathing during exercise is harder for women than men 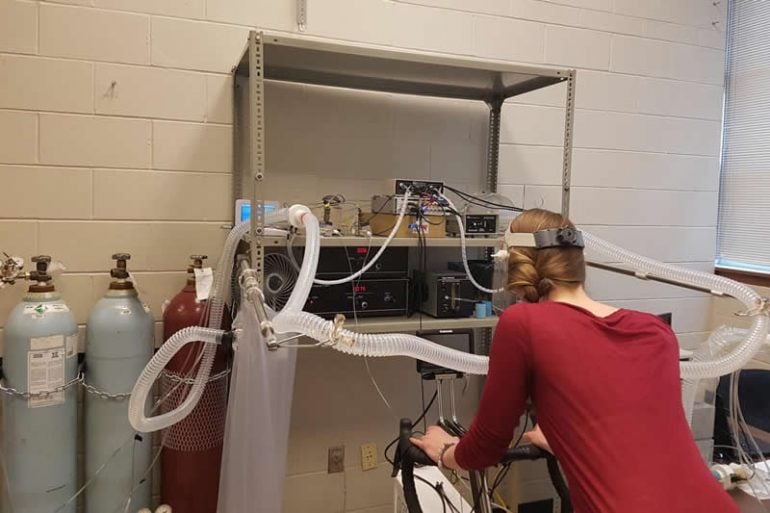 A study participant uses a stationary cycle during the exercise test. Image is credited to Paolo Dominelli, University of Waterloo.

Summary: On average, women have to work harder to breathe during strenuous exercise than men. The findings not only shed light on how sex may affect exercise dynamics but also the differences in how men and women experience airway disorders, such as asthma and COPD.

While both sexes have the capacity for phenomenal athletic achievements, women on average must work harder to breathe during strenuous exercise compared to men, according to new research. The study suggests one possible way sex could affect exercise dynamics and potentially also contribute to differences in how men and women experience airway disorders such as asthma and chronic obstructive pulmonary disease (COPD).

“The amount of work the respiratory muscles have to do to breathe a given volume is greater in women,” said Paolo Dominelli, PhD, assistant professor at the University of Waterloo in Canada. “It is thought that this is due to women having smaller airways than men, which causes the airflow resistance to be higher.”

Dominelli was scheduled to present the research at the American Physiological Society annual meeting in San Diego this month. Though the meeting, to be held in conjunction with the 2020 Experimental Biology conference, was canceled in response to the COVID-19 outbreak, the research team’s abstract was published in this month’s issue of The FASEB Journal.

The research team recruited six men and five women to perform two maximal exercise tests, in which participants gradually increased their level of exertion on a stationary cycle until they were exercising as hard as they could. Participants breathed through a mouthpiece attached to a large bag. During one session, the bag was filled with normal room air. During the other, the bag was filled with a mixture of oxygen and helium. Each bag contained the same amount of oxygen, and participants were not told which mixture they were breathing on which day.

A small tube was inserted into participants’ nose and throat during the tests to monitor the pressure inside the esophagus. This procedure allowsthe researchers to measure the amount of work required to breathe. When the bag contained the helium mixture, the results showed no differences in the work of breathing between men and women. When it contained room air, breathing required significantly more work for women than men.

The experiment was designed to mimic how men’s larger airways reduce breathing resistance. The helium mixture is much less dense than room air and, as a result, flows in a more laminar manner. In a laminar flow, air molecules are all flowing in the same direction, like water in a smooth river. In a turbulent flow, air molecules swirl in different directions, akin to the eddies that form around a boulder in the middle of a river. Turbulent flow in the airways causes more resistance, which requires more work to overcome.

“Two big factors that determine whether flow is laminar or turbulent is the size of the airway and the flow,” Dominelli explained. “At rest, the rate of air flow is very low, so even though women have smaller airways than men, air flow is still laminar. As exercise intensity increases, you breathe faster, and at some point the airflow goes from laminar to turbulent. Air flow in men’s airways will also eventually turn from laminar to turbulent, but this requires a higher rate of air flow than is required in women.”

Dominelli cautioned that the differences observed in the study relate to size and sex, and that there is great variability in airway size among different individuals. Although men on average have larger airways, a man and woman of the same height could have similar-sized airways. Nonetheless, the research provides useful insights on basic physiology at a population level and could also help researchers better understand how airway diseases affect the transition from laminar to turbulent flow in women and men.

New Information About the Effects of Sleep on the Human Brain

Original Research: The study will be published in FASEB Journal.